People traveling through San Francisco International Airport will be romanced with serenades, chocolates and a one-of-a-kind Valentine when they fly through Terminal 2 today. Alaska Airlines and...

SAN FRANCISCO, Feb. 14, 2018 /PRNewswire/ — People traveling through San Francisco International Airport will be romanced with serenades, chocolates and a one-of-a-kind Valentine when they fly through Terminal 2 today. Alaska Airlines and San Francisco General Hospital Foundation (SFGHF) unveiled a giant, sky blue and gold heart sculpture as part of the Hearts in San Francisco program which will have a semi-permanent place at the airport. Designed by artist Gina Teichert, the sculpture titled Outerlands, signifies Alaska Airlines' ongoing commitment to delivering kind-hearted service to the Bay Area community. 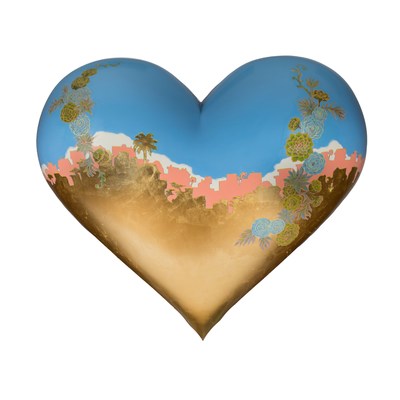 Teichert's sculpture was inspired by the gilded rays of sun as it breaks through the fog on an overcast San Francisco day. Gold leaf illuminates the sculpture and is a nod to San Francisco's Gold Rush history.

The Hearts in San Francisco program originated in 2004, bringing the community and visitors together through public works of art. To date, more than 350 hearts have been created to help raise over $11 million to fund vital programs at Zuckerberg San Francisco General Hospital. Notably, the Terminal 2 work of art is the 214 large heart created, a fun link to Valentine's Day.

"We are grateful to Alaska Airlines for bringing an iconic heart to our city's airport and sharing the importance of Zuckerberg San Francisco General Hospital and Trauma Center with the region's residents, workers and visitors," said Judy Guggenhime, San Francisco General Hospital Foundation Board chair. "Gina's sculpture will welcome travelers to SFO in style and brighten their journey. We are honored to have a heart installed in Terminal 2 at SFO."

The five-foot tall heart, made of fiberglass and weighing 400 pounds, will be hard to miss in the Terminal 2 food court this spring after it makes its public, temporary debut at the Foundation's annual Heroes & Hearts luncheon on February 15.

"This heart sculpture is not only a testament to Alaska Airlines' commitment to the San Francisco International Airport and its passengers, but also to the city of San Francisco and its residents," said Mayor Mark Farrell. "Zuckerberg San Francisco General is one of the city's most revered and respected institutions, and the Alaska Airlines partnership is another opportunity to highlight the great work that is carried out every day at the hospital."

Alaska Airlines, together with Virgin America and its regional partners, flies 44 million guests a year to more than 115 destinations with an average of 1,200 daily flights across the United States and to Mexico, Canada and Costa Rica. With Alaska and Alaska Global Partners, guests can earn and redeem miles on flights to more than 900 destinations worldwide. Alaska Airlines ranked "Highest in Customer Satisfaction Among Traditional Carriers in North America" in the J.D. Power North America Satisfaction Study for 10 consecutive years from 2008 to 2017. Learn more about Alaska's award-winning service at newsroom.alaskaair.com and blog.alaskaair.com. Alaska Airlines, Virgin America and Horizon Air are subsidiaries of Alaska Air Group (NYSE: ALK).