Alaska Airlines received a single operating certificate from the Federal Aviation Administration (FAA) today for Alaska Airlines and Virgin America, marking another significant milestone in the... 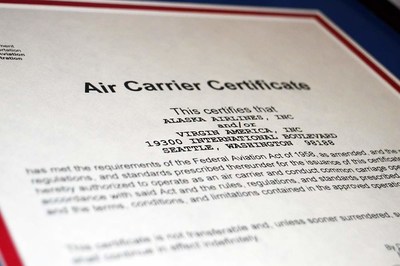 "This is a big moment for our company. We’re now recognized as a one airline in the eyes of the FAA," said Ben Minicucci, Alaska Airlines’ president and chief operating officer and CEO of Virgin America. "I want to congratulate and thank the teams at Alaska and Virgin America for their tireless work to get this done on time, including Gary Beck, the executive sponsor who led this project from the beginning. The CAVOK Group was also instrumental with this massive effort. And we greatly appreciate the assistance of the FAA, the Department of Transportation and other agencies as we accomplished this major milestone."

Alaska closed its purchase of Virgin America in December 2016. Since then, a tremendous amount of work and planning has been done to align the operating policies and procedures of the two carriers, which is part of the thorough regulatory requirements established by the FAA to achieve a single operating certificate.

More than 110 employees from both airlines worked to obtain the single operating certificate. They logged approximately 70,000 hours; reviewed 346 different operational topics across 136 manuals; analyzed more than 39,000 pages of material; and instituted roughly 1,500 changes to policies and procedures throughout 68 various manuals. More than 10,500 frontline employees have been trained on the updated policies and procedures. As part of the single operating certificate approval process, Virgin America flight attendants were issued iPhones for their work duties, matching their Alaska counterparts; Virgin America pilots are now going through a validation period to receive iPads, similar to Alaska’s pilots.

There has been a steady flow of accomplishments on integration. Among them, as of Jan. 1, the Virgin America loyalty program integrated with Alaska Mileage Plan, and the company transitioned to a single payroll and benefits program. The single operating certificate allows Alaska to continue integration work that can only be achieved with the certification. An additional milestone will be reached in March when an Airbus operations control center will be co-located with one for Boeing aircraft at Alaska’s Flight Operations Center in Seattle.

Learn more about the integration on the Alaska Airlines blog.

Alaska Airlines is focused on creating an airline people love, with great service, low airfares and a generous loyalty program. Alaska’s mission is to be the airline of choice on the West Coast. Alaska has the most nonstops from the West Coast of any airline. Alaska keeps growing, especially in California, where it now offers service to 42 destinations from the Bay Area.