Alaska Airlines reaffirms its commitment to the West Coast with new, nonstop service from the Pacific Northwest and the state of Alaska in the north, and from San Francisco, Los Angeles and San...

SEATTLE, Aug. 28, 2019 /PRNewswire/ — Alaska Airlines reaffirms its commitment to the West Coast with new, nonstop service from the Pacific Northwest and the state of Alaska in the north, and from San Francisco, Los Angeles and San Diego in the south. 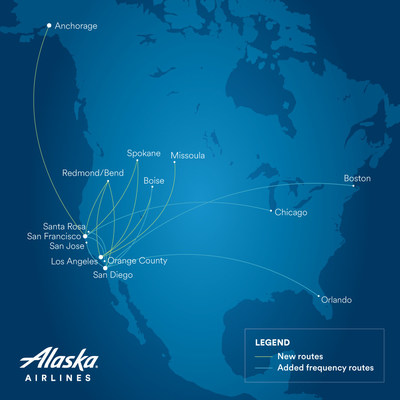 Starting in early January, guests will be able to travel eight new routes, which will appeal to both leisure travelers and those flying for business. Tickets are now on sale. The new scheduled service will link these destinations:

"We're excited to offer even more nonstops between vibrant Pacific Northwest communities and our growing hubs in California," said Brett Catlin, Alaska Airlines managing director of capacity planning and alliances. "Whether it's travel for a weekend getaway to Missoula or a day trip to San Francisco, we're proud to offer nearly 600 daily flights between West Coast cities."

Alaska is also increasing the frequency of flights between certain markets:

Alaska's guests can connect with the airline's Global Partners at gateway airports on the West Coast – such as Los Angeles and San Francisco – to fly to more than 900 destinations around the globe. Flyers can also earn and redeem miles with the airline's highly-acclaimed Mileage Plan program.

A majority of the new routes will be served by the Embraer 175 jet, an aircraft with only window and aisle seating – no middle seats. On all of the new routes, guests will enjoy award-winning service in a three-class cabin that includes First Class and Premium Class; a fresh, seasonal food and beverage menu; Most Free Movies in the Sky with hundreds of movies and TV shows available for viewing on personal devices; free texting on most flights; and Wi-Fi connectivity for purchase.

Alaska has also renovated its airport lounges in Anchorage, Los Angeles and Seattle, with a brand-new lounge in San Francisco scheduled to open in 2020.

Alaska Airlines and its regional partners fly 46 million guests a year to more than 115 destinations with an average of 1,200 daily flights across the United States and to Mexico, Canada and Costa Rica. Alaska Airlines ranked "Highest in Customer Satisfaction Among Traditional Carriers in North America" in the J.D. Power North America Airline Satisfaction Study for 12 consecutive years from 2008 to 2019. Learn about Alaska's award-winning service at newsroom.alaskaair.com and blog.alaskaair.com. Alaska Airlines and Horizon Air are subsidiaries of Alaska Air Group (NYSE: ALK).