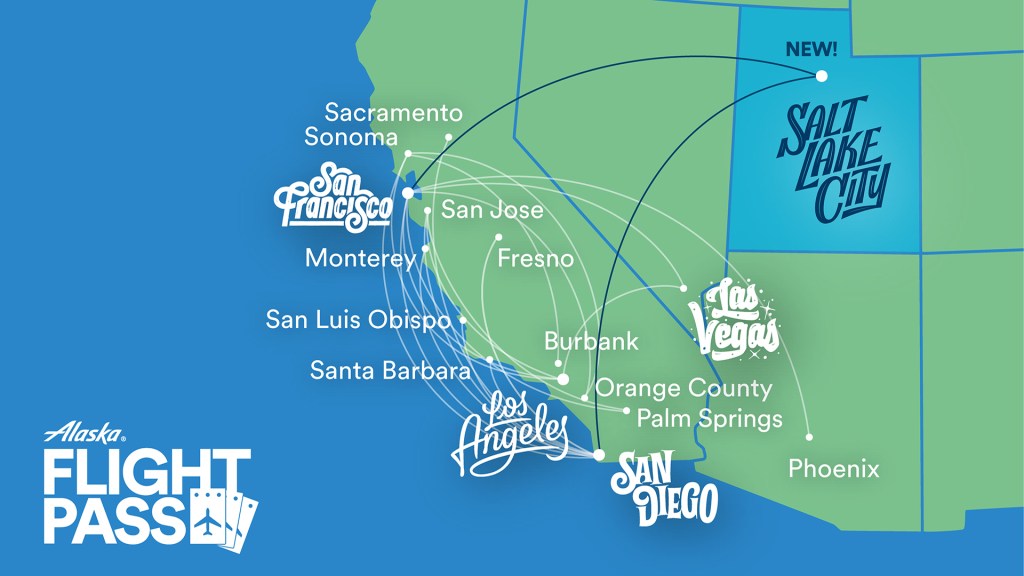 SEATTLE — Alaska Airlines, the only U.S. airline to offer a pay-by-month flight subscription service, is expanding its popular program to Salt Lake City less than a year after its launch.

Flight Pass subscribers will now be able to fly between Salt Lake City and San Francisco or San Diego, in addition to 18 other routes throughout California and select cities in Nevada and Arizona. The addition of the Salt Lake City routes outside of the Golden State comes just in time for the start of ski season and the gift-giving holidays.

The service allows guests to book six, 12 or 24 roundtrip flights at a fixed-monthly rate. Subscribers lock in main cabin deals for a full year and pay taxes and fees when booking flights, which cost as low as $14.61 per flight.

Since its launch in February, Flight Pass has grown steadily among frequent travelers on the West Coast, particularly among Millennials and Generation Z from Northern California. The most booked Flight Pass routes connect between the major metro areas in California, while the most popular plan among the Flight Pass options is the $49 per month service that includes six roundtrip flights a year. Flight Pass is currently offered in select cities in California, Nevada, Arizona and now Utah.

Alaska Airlines and our regional partners serve more than 120 destinations across the United States, Belize, Canada, Costa Rica and Mexico. We emphasize low fares and award-winning customer service. Alaska is a member of the oneworld global alliance. With the alliance and our additional airline partners, our guests can travel to more than 900 destinations on more than 20 airlines while earning and redeeming miles on flights to locations around the world. Learn more about Alaska at news.alaskaair.com and follow @alaskaairnews for latest news. Alaska Airlines and Horizon Air are subsidiaries of Alaska Air Group.