For the 12th year in a row, Alaska Airlines is recognized as the highest ranked airline in customer satisfaction among traditional carriers in the J.D. Power 2019 North America Airline...

SEATTLE, May 29, 2019 /PRNewswire/ — For the 12th year in a row, Alaska Airlines is recognized as the highest ranked airline in customer satisfaction among traditional carriers in the J.D. Power 2019 North America Airline Satisfaction Study. Alaska won this year with its best score ever. 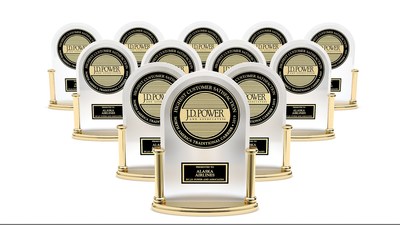 "All 22,000 of us at Alaska take tremendous pride in J.D. Power. Staying on top for a dozen years is a stunning accomplishment for our fantastic people, especially during a time of significant change as we brought two airlines together," said Alaska Airlines CEO Brad Tilden. "It's a fitting recognition for our people and the hard work they do for every customer on every flight. They're proving there's a better way to fly."

To celebrate a dozen J.D. Power wins, Alaska is offering discounted upgrades to Premium Class for $12 in select West Coast markets* for today only. Get more details here.

The J.D. Power study measures the satisfaction of business and leisure travelers who flew a major North American carrier between March 2018 and March 2019. Alaska won among traditional airlines with an overall score of 801, up 26 points from 2018. This is the first time Alaska has scored higher than 800 on the J.D. Power 1,000-point scale.

"While we're not the biggest, we love being the best for our guests," Tilden said. "We have great people who consistently provide genuine service and we offer a premium product at a lower price. To our guests – thank you for having high expectations and for always pushing us to get better."

In this year's study, Alaska received the highest ranking in six out of seven categories among traditional airlines: aircraft; check-in; cost and fees; boarding/deplaning/baggage; flight crew; and reservation. The scores are an improvement in every category compared to last year, with significant improvement in the inflight service category. Learn more at jdpower.com/awards.

Alaska continues to invest in improvements to its inflight products: Ongoing retrofitting of interior cabins including new seating, and the addition of foot rests in First Class; installation of high-speed satellite Wi-Fi on more and more aircraft; free text messaging and entertainment with Most Free Movies in the Sky; and new, fresh food options and craft beers with a West Coast vibe from local companies. Alaska is also unveiling renovated and refreshed lounges from Anchorage to Los Angeles.

Alaska loves the West Coast, but – thanks to 18 airline partnerships – can also connect flyers to the world with our Global Partners who fly to more than 900 amazing destinations around the globe. Alaska also bridges the West Coast to the East Coast, from Big Sur to the Big Apple, with dozens of routes linking cities on both coasts. Flyers can earn and redeem miles with Alaska's highly-acclaimed Mileage Plan program, with award travel that starts at only 5,000 miles.

Alaska Airlines and its regional partners fly 46 million guests a year to more than 115 destinations with an average of 1,200 daily flights across the United States and to Mexico, Canada and Costa Rica. With Alaska and Alaska Global Partners, guests can earn and redeem miles on flights to more than 900 destinations worldwide. Learn about Alaska's award-winning service at newsroom.alaskaair.com and blog.alaskaair.com. Alaska Airlines and Horizon Air are subsidiaries of Alaska Air Group (NYSE: ALK).

*Terms and conditions
Purchase a Premium Class upgrade for $12 on nonstop flights between select cities. Premium Class upgrade must be purchased by 11:59 p.m. Pacific time on May 29, 2019. Valid on flights departing Monday through Thursday and Saturday from Aug. 20, 2019 through Nov. 13, 2019.  Qualifying flights must be marketed and operated by Alaska Airlines. Valid for new paid upgrades only. Previously upgraded seats are not eligible for refund or discount. Not valid for flights departing on Fridays or Sundays. Not valid on codeshare flights. Unless they conflict with these terms, all terms and conditions for Main Cabin paid upgrades and your ticketed fare apply. Offer subject to change without notice.