For the 11th year in a row, Alaska Airlines is proud to be recognized as the highest ranked airline in customer satisfaction among traditional carriers in the J.D. Power 2018 North America Airline...

SEATTLE, May 30, 2018 /PRNewswire/ — For the 11th year in a row, Alaska Airlines is proud to be recognized as the highest ranked airline in customer satisfaction among traditional carriers in the J.D. Power 2018 North America Airline Satisfaction Study. 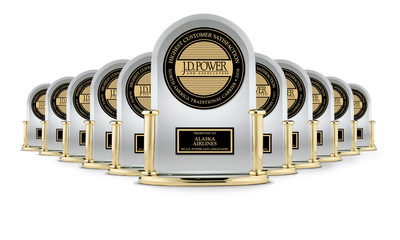 "To earn this award for 11 years is a fantastic tribute to our people, especially as we worked to integrate two airlines," said Alaska Airlines CEO Brad Tilden. "On behalf of the entire leadership team, I would like to thank all 23,400 Alaska and Horizon employees and our partners for their incredible dedication to our guests, and for consistently providing amazing, kind hearted service."

The study is based on 11,508 responses. It measures the satisfaction of business and leisure travelers who flew a major North America carrier between April 2017 and March 2018. Alaska won among traditional airlines with an overall score of 775, up 10 points from 2017, and highest of any traditional airline across five categories, including aircraft; cost and fees; boarding/deplaning/baggage; flight crew; and check-in.

Alaska Airlines improved its scores in every category compared to last year, with significant improvement in the aircraft category, which includes condition of the aircraft, comfort, leg room and storage. Over the last year, Alaska invested in updates to the guest experience including completing the rollout of Premium Class to Boeing 737-800, 900 and 900ER fleets. Guests flying Premium Class receive more legroom, early boarding, a complimentary snack and drinks. In the past year, Alaska Airlines also added 15 spacious, three-class cabin E175s to its fleet. The airline is constantly making investments in the guest experience with the addition of high speed satellite connectivity, more free movies and TV content, new First Class and main cabin menu items, new craft beers and local wines selections, and coming later this summer, a new lounge experience, which includes an on-site barista.

"While awards are a great way to differentiate ourselves from others, our purpose remains – creating an airline people love – ranking number one in this study is a fantastic reminder that we are moving in the right direction," said Tilden.

The J.D. Power ranking comes as the airline moves into its final stages of its integration with Virgin America. The integration is more than 75 percent complete after having moved to one airport brand, website, mobile app and call center in late April.

This year Alaska was also ranked the #1 airline in the U.S by the Points Guy, Best U.S. Airline by Money Magazine, Mileage Plan best by Flyer Talk and Top in Airline Quality Rating for the second year in a year in a row.

Alaska Airlines and its regional partners fly 44 million guests a year to more than 115 destinations with an average of 1,200 daily flights across the United States and to Mexico, Canada and Costa Rica. With Alaska and Alaska Global Partners, guests can earn and redeem miles on flights to more than 900 destinations worldwide. Alaska Airlines ranked "Highest in Customer Satisfaction Among Traditional Carriers in North America" in the J.D. Power North America Airline Satisfaction Study for 11 consecutive years from 2008 to 2018.  Learn about Alaska’s award-winning service at newsroom.alaskaair.com and blog.alaskaair.com. Alaska Airlines and Horizon Air are subsidiaries of Alaska Air Group (NYSE: ALK).