Alaska Airlines today announced its #FillBeforeYouFly initiative to partner with guests and employees to continue reducing the use of single-use plastics inflight. The aim: rally with flyers to...

SEATTLE, Sept. 12, 2019 /PRNewswire/ — Alaska Airlines today announced its #FillBeforeYouFly initiative to partner with guests and employees to continue reducing the use of single-use plastics inflight. The aim: rally with flyers to bring their own water bottle and fill it before they board. This is one of Alaska Airlines’ many sustainability efforts to reduce inflight waste per passenger going to landfills by 70% by 2020. 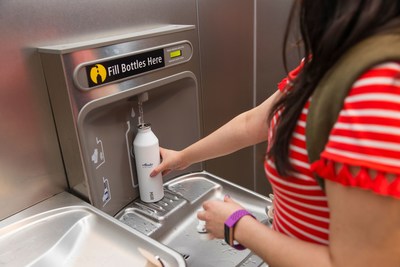 "We’re passionate about working with our guests, employees, airports, and partners to reduce waste, protect habitats, and improve water health," said Diana Birkett Rakow, Alaska Airlines’ vice president of external relations. "Land, water, and animals are incredibly special parts of the places we live and fly – and it takes many different company and individual actions together to protect them for the long term. This is just one step. If just 10% of our guests bring their own pre-filled water bottle when they fly and choose reusables, it could save more than 700,000 plastic water bottles and four million plastic cups per year. That’s a big lift."

Plastic bottles are among the top five most common items found in beach cleanups around the world, and according to the Ellen MacArthur Foundation, by 2025, the ocean is expected to contain one metric ton of plastic for every three metric tons of fish.

The airline will plant a tree for every passenger who brings a pre-filled water bottle onto their flight and posts a photo to social media tagging @AlaskaAir with the hashtag #FillBeforeYouFly. Alaska guests can help BEF achieve its goal of planting one million trees on the West Coast to improve the environment and restore habitats for local fish and wildlife.

Read more: #FillBeforeYouFly: Why Alaska is urging guests to bring their own water bottles

In 2018, Alaska Airlines became the first airline to replace single-use plastic stir straws and citrus picks with sustainable alternatives as part of its #StrawlessSkies initiative, in partnership with Lonely Whale. Through #FillBeforeYouFly, Alaska Airlines is aligning with the Lonely Whale #HydrateLike campaign, popular on social media channels and inspiring individuals and companies alike to rethink reliance on single-use plastic bottles.

From the millions of gallons of fuel saved to the tiny plastic straws that were removed last year, Alaska Airlines has a long track record of flying greener. Since it started auditing its recycling efforts in 2010, Alaska has reduced per-passenger waste going to landfills by 65%, essentially cutting waste in half. In the last nine years, flight attendants captured over 15,000 tons of recyclable materials, about the same weight as 320 Boeing 737-900ERs. Alaska Airlines also recently replaced bottled beer with aluminum cans, which are lighter and easier to recycle.

"We know this is a resource intensive business with many stakeholders involved in the journey," said Birkett Rakow. "While we’ve made progress, there’s a long road ahead of us. We’re working with supply chain partners and employees to come up with solutions to reduce waste, adopt sustainable practices and eliminate single-use plastics inflight. Change takes time; we value the collective impact our customers and employees can make today."

Support from our partners

Bonneville Environmental Foundation (BEF)
"The rivers and streams that fuel the West Coast are polluted, but planting trees in the right places can help reduce pollution and restore a healthy habitat," said Bonneville Environmental Foundation Chief Development Officer Val Fishman. "Alaska Airlines is setting an industry standard with their commitment to supporting water quality programs. They are serving an important role driving awareness about widespread water issues among customers, while also helping to put actual trees in the ground to ensure the cool, clean water needed for habitats to thrive."

Lonely Whale
"We are proud to partner with Alaska Airlines, a leader that is acknowledging the dangers that plastic poses and taking initiative to change flyer behavior," said Dune Ives, CEO of Lonely Whale. "Lonely Whale only works with brands that are authentic sustainability leaders. Alaska was the first airline willing to disrupt the way we think about plastic consumption, particularly when we are in the sky, and we’re proud to share that you can #HydrateLike Alaska Airlines and #FillBeforeYouFly."

MiiR
"Single use plastics are choking our streams and oceans and endangering our precious salmon and orca," said Bryan Pape, CEO and Founder of MiiR. "We’re proud to take a stand alongside another great Northwest-born brand to help reduce single-use plastic and reduce harm to our beautiful planet."

Seattle-Tacoma International Airport
"Programs like this one make it easier for passengers, employees, and businesses to lessen their environmental impact at our airport," said Peter Steinbrueck, Port of Seattle Commissioner. "Passengers and businesses at the airport help Sea-Tac Airport keep 41% of its terminal waste from landfills by sorting into recycling or compost bins. Our goal is to keep 60% of terminal waste from landfills."

About Alaska Airlines
Alaska Airlines and its regional partners fly 46 million guests a year to more than 115 destinations with an average of 1,200 daily flights across the United States and to Mexico, Canada and Costa Rica. With Alaska and Alaska Global Partners, guests can earn and redeem miles on flights to more than 900 destinations worldwide. Alaska Airlines ranked "Highest in Customer Satisfaction Among Traditional Carriers in North America" in the J.D. Power North America Airline Satisfaction Study for 12 consecutive years from 2008 to 2019. Learn about Alaska’s award-winning service at newsroom.alaskaair.com and blog.alaskaair.com. Alaska Airlines and Horizon Air are subsidiaries of Alaska Air Group (NYSE: ALK).

Bonneville Environmental Foundation (BEF)
BEF pioneers’ innovative solutions at the intersection of renewable energy and freshwater. We empower corporations, utilities, and the public to play a leading role in creating a stable climate by providing innovative solutions that support healthy watershed ecosystems, expand access to renewable energy, educate and empower the next generation of clean energy leaders, and reduce greenhouse gas emissions. Learn more at b-e-f.org.

Lonely Whale
Lonely Whale is an award-winning incubator for courageous ideas including their global #StopSucking and #HydrateLike campaigns that drive impactful market-based change on behalf of our ocean. Founded in December 2015 by Adrian Grenier and Lucy Sumner, Lonely Whale is inspired by the power of community to create the change needed to ensure a healthy planet. Lonely Whale is working towards a new era of radical collaboration, together facilitating the creation of innovative ideas that push the boundary on current trends in technology, media and advocacy that positively impact the health of our ocean. Lonely Whale’s work has been recognized by Fast Company’s World Changing Ideas, the Shorty Awards and the ADDY Awards. Lonely Whale is a proud supporter of the UN Environment’s #CleanSeas campaign. To learn more and support, visit www.lonelywhale.org or follow @LonelyWhale.

MiiR
MiiR, an award-winning Product to Project® company and certified B Corp, is based in Seattle, WA with the mission to empower people for a better future. Its Product to Project® model means every MiiR product sold helps fund trackable giving projects. To date, MiiR has given over $1,000,000 and empowered the lives of 100,000+ people worldwide, and its customers are invited to experience the story behind their purchase by registering the Give Code™ found on the base of their MiiR product. https://www.miir.com/ 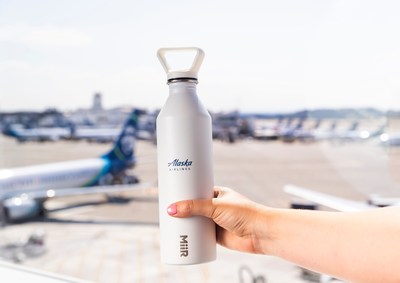