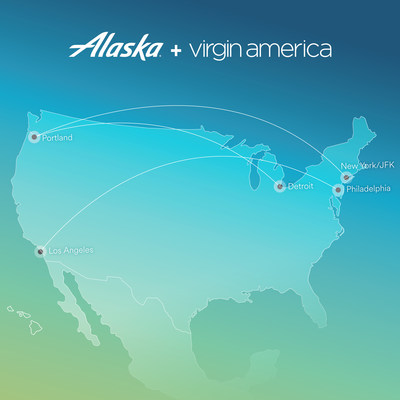 "Alaska Airlines continues to expand service from our West Coast hubs by adding convenient, nonstop flights to popular destinations like New York City, Philadelphia and Detroit," said John Kirby, vice president of capacity planning at Alaska Airlines. "Whether traveling for business or leisure, we continue to meet the needs of our valued guests with more than 800 daily flights in over 300 markets originating from the West Coast."

With this new service, Alaska and Virgin America will provide Portland residents access to 130 daily nonstop flights to 58 destinations, more than any other carrier serving Portland International Airport.

This added service provides Rose City flyers greater access to two New York metropolitan area airports – JFK and Newark. JFK is the country’s busiest international gateway, and is a prime jumping off point for customers traveling to Europe and beyond on Alaska Global Partners including British Airways, Icelandair and Condor. Members of the Alaska Mileage Plan can earn and redeem miles when flying on one of Alaska’s global airline partners to over 900 destinations around the globe.

With the new service to Detroit, Alaska Airlines will offer the only daily, year-round nonstop service from Portland to the Motor City, home to auto industry giants such as General Motors and Ford Motor Company. Guests will now have access to low fare options, with the reliability and award-winning customer service they have come to expect from their go-to airline on the West Coast.

The new Los Angeles–Philadelphia flight builds on the 27 new markets the combined airline has added from California, since merging with Virgin America in December. Virgin America previously served this market from April 2012 to October 2014.

Alaska Airlines, together with Virgin America and its regional partners, flies 40 million customers a year to 118 destinations with an average of 1,200 daily flights across the United States and to Mexico, Canada, Costa Rica and Cuba. With Alaska and Alaska Global Partners, customers can earn and redeem miles on flights to more than 900 destinations worldwide. Alaska Mileage Plan ranked "Highest in Customer Satisfaction with Airline Loyalty Rewards Programs" in the J.D. Power Airline Loyalty/Rewards Program Satisfaction Report for the last three consecutive years. Learn more about Alaska’s award-winning service and unmatched reliability at newsroom.alaskaair.com and blog.alaskaair.com. Alaska Airlines, Virgin America and Horizon Air are subsidiaries of Alaska Air Group (NYSE: ALK).