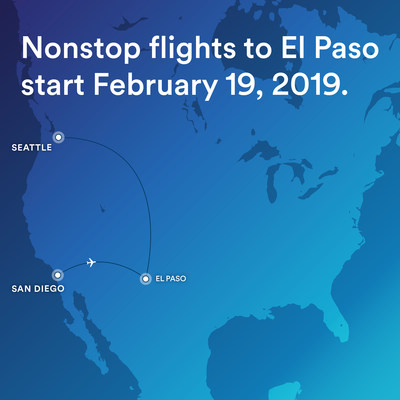 The new service is scheduled to begin Feb. 19, 2019, offering the only nonstop flights from Seattle and San Diego to El Paso. The nonstop flights that will connect Seattle and El Paso will help improve the travel time for employees who commute between Western Washington and West Texas – two regions with significant industry and business ties.

Alaska has considered El Paso as a new destination for some time. It’s currently the largest underserved market from Seattle within the range of our Embraer 175 jets. That aircraft – with three cabin classes – is a perfect fit for this route, which will be flown by Horizon Air.

"We’re pleased to add another exciting destination to our route map with our new service to El Paso," said John Kirby, vice president of capacity planning at Alaska. "We’re connecting two of our key West Coast gateways – Seattle and San Diego – with our first destination in West Texas. We’re bringing our low fares, great customer service and industry leading loyalty program to guests in a new region of the west for Alaska."

"We are beyond thrilled to welcome Alaska Airlines to El Paso!" said Monica Lombraña A.A.E., Managing Director of El Paso International Airport and International Bridges. "Alaska Airlines enhances connectivity for both leisure and business travelers with daily flights to the West Coast and beyond. We deeply appreciate their investment in our community and look forward to a lasting and successful partnership."