Alaska Airlines and Finnair are teaming up to give members of their frequent flyer programs the opportunity to earn miles/points on each other as Finnair expands its wings with new flights from...

SEATTLE, May 22, 2017 /PRNewswire/ — Alaska Airlines and Finnair are teaming up to give members of their frequent flyer programs the opportunity to earn miles/points on each other as Finnair expands its wings with new flights from San Francisco. 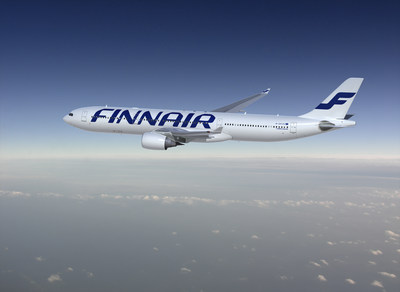 "We’re thrilled to be partnering with European-favorite Finnair, as they launch their first West Coast service from our San Francisco hub to Helsinki on June 1," said Andrew Harrison, Alaska Airlines executive vice president and chief commercial officer. "Our Mileage Plan members will be able to fly Finnair to over 60 destinations in Europe from San Francisco, Chicago and New York’s JFK."

Alaska Airlines recently announced a major expansion of its San Francisco service. Alaska, along with Virgin America, now has 83 daily departures from San Francisco to 35 destinations.

"We are very excited to collaborate with Alaska Airlines on this new frequent flyer partnership," said Juha Jarvinen, chief commercial officer at Finnair. "Our customers travelling to and from the U.S. will greatly benefit from the extensive network both airlines have to offer."

Known for its modern, Nordic-themed service, Finnair connects 18 cities in Asia and seven cities in North America to over 60 destinations in Europe. Finnair operates Airbus A330-300 aircraft on its U.S. routes.

About Alaska Airlines:
Alaska Airlines, together with Virgin America and its regional partners, flies 40 million guests a year to 119 destinations with an average of 1,200 daily flights across the United States and to Mexico, Canada, Costa Rica and Cuba. With Alaska and Alaska Global Partners, guests can earn and redeem miles on flights to more than 900 destinations worldwide. Alaska Airlines ranked "Highest in Customer Satisfaction Among Traditional Carriers in North America" in the J.D. Power North America Satisfaction Study for 10 consecutive years from 2008 to 2017. Alaska Mileage Plan ranked "Highest in Customer Satisfaction with Airline Loyalty Rewards Programs" in the J.D. Power 2016 Airline Loyalty/Rewards Program Satisfaction Report for the last three consecutive years. Learn more about Alaska’s award-winning service and unmatched reliability at newsroom.alaskaair.com and blog.alaskaair.com. Alaska Airlines, Virgin America and Horizon Air are subsidiaries of Alaska Air Group (NYSE: ALK).

About Finnair:
Finnair flies between Asia, Europe and North America with an emphasis on fast connections via Helsinki, carrying more than ten million passengers annually. In 2017, Finnair’s extensive network connects 18 cities in Asia and 7 cities in North America with over 60 destinations in Europe. The airline, a pioneer in sustainable flying, was the first European airline to fly the next-generation, eco-smart Airbus A350 XWB aircraft and it is the first airline listed in the Leadership Index of the worldwide Carbon Disclosure Project. The only Nordic carrier with a 4-star Skytrax ranking, Finnair has also won the World Airline Award for Best Airline Northern Europe for the past seven years running. Finnair is a member of oneworld, the alliance of the world’s leading airlines committed to providing the highest level of service and convenience to frequent international travellers.