SEATTLE, July 16, 2020 /PRNewswire/ — Alaska Airlines announced today seven new routes from Los Angeles International Airport (LAX) to further connect its guests between Southern California and key markets around the country, including the first nonstop service from the West Coast to Fort Myers/Naples, Fla. (RSW) from both LAX and Seattle. 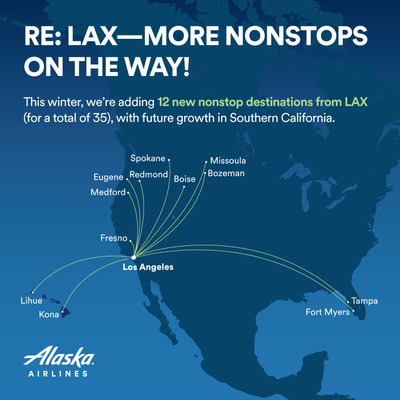 The added service builds on five recent additional routes that link LAX to cities across the West for a total of 12 new routes this year. Alaska will fly to 35 nonstop destinations from LAX this winter with a strong platform for future growth. Tickets for all flights are available for purchase at alaskaair.com with fares starting as low as $39 one way.

The new routes will connect Alaska’s guests in Southern California to destinations in Florida (Fort Myers and Tampa); Hawaii (Kona and Lihue); Montana (Bozeman) and Oregon (Eugene and Medford). Service starts on Oct. 1 for the Oregon markets, and between Nov. 20 and December 18 for the remaining destinations.

"LAX is one of Alaska’s important hub markets and continues to offer valuable opportunities for selective expansion," said Brett Catlin, Alaska Airlines managing director of capacity planning and alliances. "The addition of these 12 new routes from LAX along with our upcoming membership in the oneworld alliance sets the stage for future growth."

Alaska’s guests can currently connect with the airline’s 16 Global Partners at gateway airports on the West Coast, including LAX, to fly to more than 800 destinations around the globe. Flyers can also earn and redeem miles with the airline’s highly-acclaimed Mileage Plan program.

At Alaska, the safety of its guests and employees is always a top priority. Recently, nearly 100 actions have been taken to keep everyone safe. The airline emphasizes a layered approach to safety, which starts with the requirement that all employees and guests to wear a face mask or covering through the airport and onboard, with few exceptions. Flyers must also take a health agreement at check-in to acknowledge and attest to their willingness to adhere to the mask policy. Non-compliance could result in the issuance of a yellow card to remind guests of the importance of wearing a mask. Other layers of safety include physical distancing onboard; enhanced cleaning of aircraft; hospital-grade HEPA air filters; an air filtration system that brings fresh, outside air into the cabin every three minutes; reduced onboard service to limit interactions; hand-sanitizing stations throughout the journey and more.

Alaska Airlines and its regional partners serve more than 115 destinations across the United States and North America, providing essential air service for our guests along with moving crucial cargo shipments, such as food, medicine, mail and e-commerce deliveries. With hubs in Seattle; San Francisco; Los Angeles; Portland, Oregon; and Anchorage, Alaska, the airline is known for low fares, award-winning customer service and sustainability efforts. With Alaska and its Global Partners, guests can earn and redeem miles on flights to more than 800 destinations worldwide. Learn more about Alaska at newsroom.alaskaair.com and blog.alaskaair.com. Alaska Airlines and Horizon Air are subsidiaries of Alaska Air Group (NYSE: ALK).