The season's first shipment of fresh Copper River salmon made the 1,300-mile journey from Cordova, Alaska, to Seattle onboard an Alaska Airlines 737 this morning, marking the start of the summer...

SEATTLE, May 19, 2017 /PRNewswire/ — The season’s first shipment of fresh Copper River salmon made the 1,300-mile journey from Cordova, Alaska, to Seattle onboard an Alaska Airlines 737 this morning, marking the start of the summer salmon grilling season. In addition to the 22,000 pounds of fish delivered this morning, Alaska has four flights scheduled throughout the day to bring up to 77,000 pounds of Copper River salmon to market in Anchorage and the Lower 48. 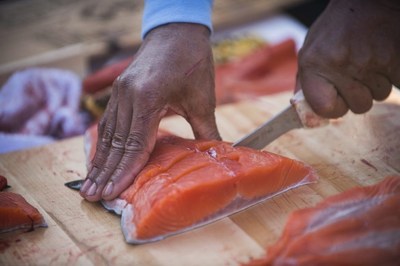 "Alaska Airlines plays a significant role in supporting the Alaska seafood industry, which is recognized worldwide for its sustainable fishing practices," said Jason Berry, Alaska Air Cargo managing director. "Our Cargo employees are working around the clock to ensure we deliver the first catch of the coveted wild Copper River salmon to market, often within 24 hours of being pulled from the water."

Every year Alaska Air Cargo partners with the state of Alaska’s three largest seafood processors, Ocean Beauty Seafoods, Trident Seafoods and Copper River Seafoods to bring the coveted fish to Seattle and Anchorage, and points beyond.

Alaska Air Cargo transports more than 170 million pounds of cargo annually—including seafood, mail and freight —and operates the most extensive air cargo operation on the U.S. West Coast of any passenger airline.

Alaska Airlines, together with Virgin America and its regional partners, flies 40 million guests a year to 119 destinations with an average of 1,200 daily flights across the United States and to Mexico, Canada, Costa Rica and Cuba. With Alaska and Alaska Global Partners, guests can earn and redeem miles on flights to more than 900 destinations worldwide. Alaska Airlines ranked "Highest in Customer Satisfaction Among Traditional Carriers in North America" in the J.D. Power North America Satisfaction Study for 10 consecutive years from 2008 to 2017. Alaska Mileage Plan ranked "Highest in Customer Satisfaction with Airline Loyalty Rewards Programs" in the J.D. Power 2016 Airline Loyalty/Rewards Program Satisfaction Report for the last three consecutive years. Learn more about Alaska’s award-winning service and unmatched reliability at newsroom.alaskaair.com and blog.alaskaair.com. Alaska Airlines, Virgin America and Horizon Air are subsidiaries of Alaska Air Group (NYSE: ALK).