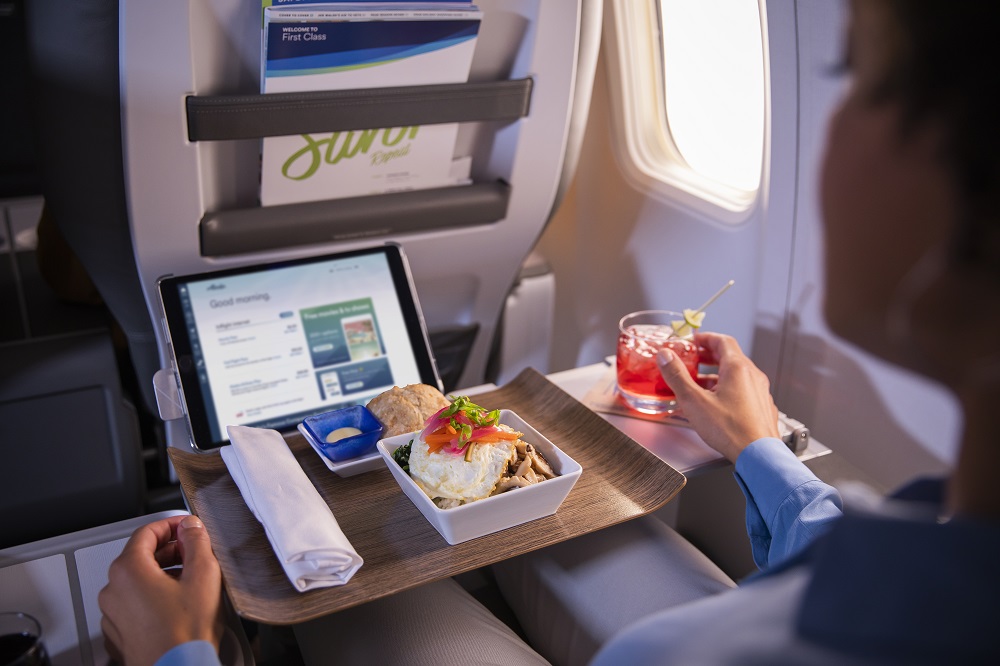 Tell us everything. Don’t hold back.”

In a room full of differing opinions and hungry stomachs, these aren’t the words you expect to hear. But Todd Traynor-Corey, Alaska Airlines director of onboard food and beverages, means it.

At one of Alaska’s multiple menu tastings every year, he solicits honest feedback from guests and flight attendants. The group isn’t shy, with feedback ranging from a sandwich that’s “too tall,” to a dish that’s “very Whole 30” and a unanimous request for “more ketchup, please.” Traynor-Corey and Alaska’s menu creator, Joshua Rappaport of LSG SkyChefs, take notes and keep the samples coming. Many of the dishes will be revised – or won’t make the cut. It’s all part of the process behind Alaska Airlines’ top-ranked rotating, seasonal menus featuring fresh and local ingredients. Taking a page from Virgin America’s book, we believe research is key in order to ensure our food is relevant. Rappaport spends as much time traveling and eating as he does in the kitchen.

“I travel up and down the West Coast,” he says. “I eat out a lot, very intentionally and deliberately. That’s my research.”

Growing up eating his mom’s homemade bread, spending his high school years in a restaurant with an organic garden on site and working at Seattle’s Four Seasons Hotel, Rappaport is no stranger to fresh food. Yet, he’s always looking for ways to perfect the art of fresh at 35,000 feet.

“Being creative and then translating recipes for an airline is more challenging than anything I’ve ever done,” he admits. “There are layers of complexity when it comes to creating food that can be served at 35,000 feet. It’s hard to keep food crisp, for example, because of the humidity in airplane ovens.”

Despite these challenges, he says it’s a big misconception that airplane food can’t be fresh.

“In our kitchen, there is an army of people making everything as close to your flight time as possible,” he explains. “Most food on Alaska Airlines either originated from the city you are departing from or arriving at. Not all airlines can claim this.” “Approachably adventurous is what we’re after,” he says. “We want people to encounter something new but not be so edgy that we scare you away.” One of Rappaport’s favorites is a chicken dish, marinated in sliced clementines. It’s served on saffron rice and sautéed chard with roasted fennel on top.

“These are flavors people may not encounter every day,” he says. “But chicken and rice is something most people are good with.”

With the most nonstops on the West Coast, our latest menus also reflect more California food influences. “There’s a lot of Asian and Latino underpinnings in our food now,” Rappaport says. “These cultures have strong emotional connection to their food. I love this. I think it helps you feel good about what you’re eating if you know where it came from.”

While there’s no industry standard for fresh and local in the sky, it’s not something we’re veering from anytime soon.

Bottom line: we want to serve food that makes you feel good about what you’re eating,” Rappaport says.