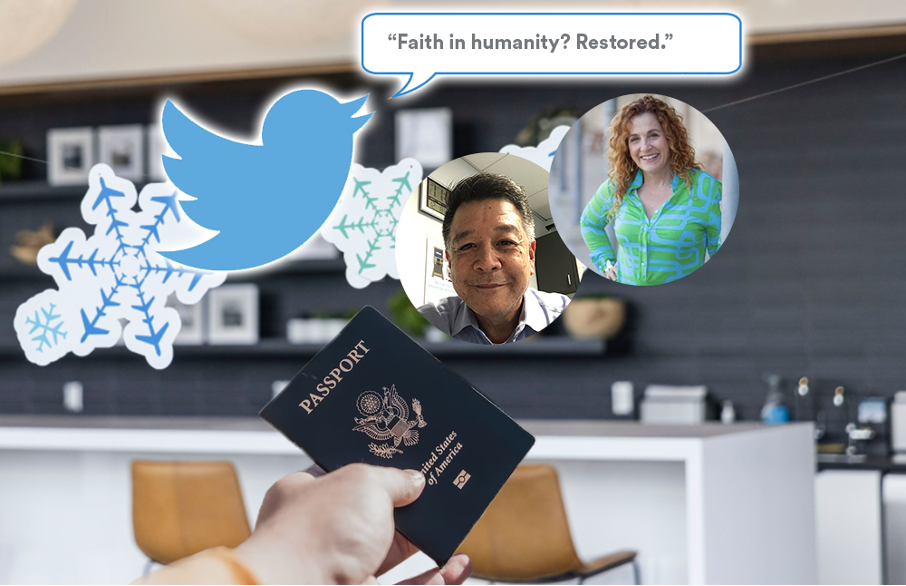 Alaska Airlines employees are some of the most kindhearted, empathetic people in the business and are there for our guests when they need it most. Recently, an Alaska employee in San Francisco, Gary, went out of his way to take care of a guest.

Here’s what happened (in her words):

Two hours later, I am still trying to unpack my ridiculous suitcases when my phone rings. It’s Gary from @AlaskaAir. He found my passport and dug around until he could find my phone number and called. I didn’t even know my passport was missing.

Gary wanted to know if I was planning on returning to the airport anytime soon. I told him that I would jump in the car right away and drive the hour back to the airport, but he asked me where I lived. When I told him, he said that it would be no more than a 15 minute detour for him to drop the passport off at my house. (No way. At least a 45 min detour).

Gary brought me my passport. To my door. I tried to tip him but he wouldn’t accept anything.

Can you believe this? Faith in humanity? Restored.

Not knowing who “Gary” was, we shared this story with our employees on our intranet. Employees pieced together who “GARY” was from the tweets in a matter of hours.

Gary is a customer service agent in San Francisco, who helped Alaska Guest & Author Ayelet Waldman reunite with her passport in the most remarkable way.

It was a normal day for him, he says. He stopped by Alaska’s customer service center at SFO and saw a passport lying there.

“I asked if anyone checked to see who it belonged to. No one had, so I started searching. I found out that she had flown in from Newark. I looked up her reservation, found her phone number and called her,” Gary said.

He offered to mail her passport to New York since that was her listed address, but she said it was a business address and she actually lives in the Bay Area.

“I offered to drop it off on my way home, which was slightly out of my way, but not a big deal. The rest is history,” he said. “I like to put myself in other people’s shoes and think how they would feel if they misplaced or lost something and then learned it had been found. Total joy, right?”

Waldman, a novelist and essayist, recently flew Alaska Airlines from New York to the Bay Area. She was so impressed with the outstanding customer service she received, that she shared her recent Alaska travel story with her 25,000 followers on Twitter.