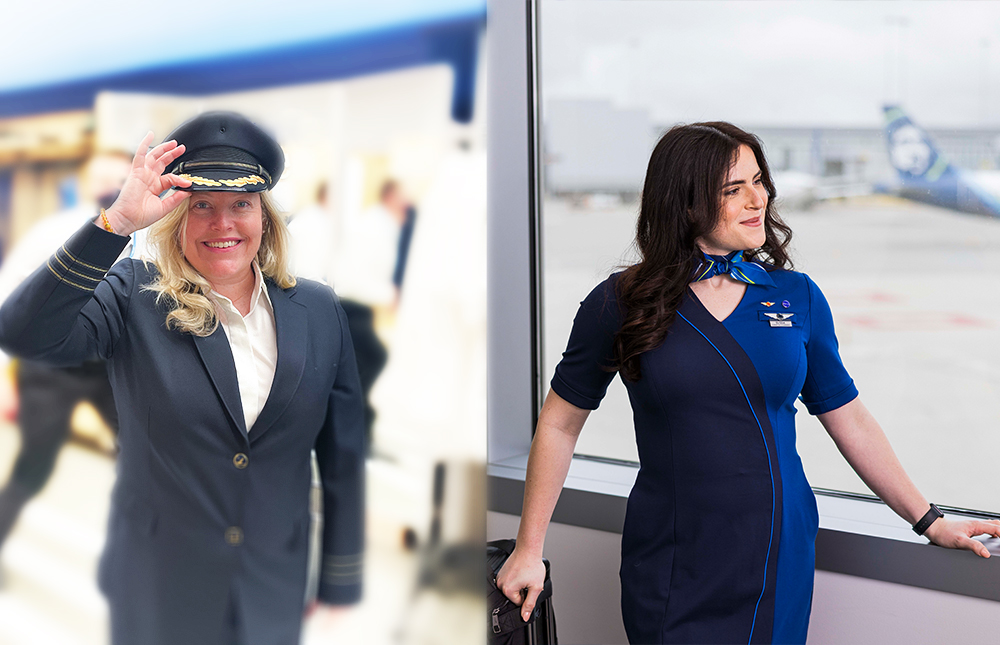 From the cabin to the controls: Meet Ali Eckert, the first flight attendant-to-pilot direct transfer in Alaska Airlines history.

While trying to decide if law school was the right move, Ali Eckert ended up at an open house for flight attendants in 2006. They were looking for Spanish speakers, and she fit the bill. After three days of interviews, she decided she really wanted the job and wanted to work for Alaska.

“My mom was a flight attendant for United and I knew I didn’t want to be a number anywhere,” she said. “From the beginning Alaska has been like a family, and I’ve never felt like a number here.”

As someone who loves to talk and isn’t shy, Eckert loved the work as a flight attendant. She loved the lifestyle and the people, but the idea of becoming a pilot was still there.

She started to get her private pilot’s license in Tacoma, Wash. but had to stop to take care of her mom when she started experiencing health issues. Eckert could no longer afford the cost of getting her license, so she put it on hold and kept flying in the cabin.

Eckert transferred to the Anchorage base in 2012 but still couldn’t afford to finish the expensive flight training. However, several Anchorage pilots remembered Eckert, and they encouraged her to continue her pursuit. The pilots, many of whom are members of the Birchwood Flying Club, even gave her a $1000 gift card to help finance the rest of her private pilot’s license.

In 2017, Eckert was hired at Alaska Central Express (ACE), a cargo airline based out of Anchorage. She fulfilled the requirements and received approval from Andy Schneider, VP of Inflight at the time, in order to work at ACE in addition to working at Alaska Airlines as a flight attendant. Mentored by ACE Capt. Timmreck, who has taught many Alaska-bound pilots, Eckert also credits Tracey Laurion, Anchorage inflight base manager, and the late Craig Huffman, Anchorage base chief pilot, with supporting her through the transition.

She was finally ready to apply for Alaska—in March of 2020—right as a global pandemic was taking hold.

While COVID-19 deferred her dream for a little longer, she got the news she was waiting for in June 2021: Alaska was hiring pilots. When a recruiter called asking for an interview, Eckert admits tearing up. She started her Alaska pilot journey in October 2021. And though her role is in the flight deck instead of the cabin, she says she’s not retiring her love of inflight.

“I miss it,” said Eckert when asked about her time as a flight attendant. “It’s always going to be a part of my heart.” Eckert turned in her flight attendant wings the day before she started training as a first officer.

She is the first flight attendant-to-pilot direct transfer in Alaska Airlines history.

Now that Eckert has achieved her dream as a newly minted San Francisco-based first officer, she’s looking to see who she can help follow in her footsteps.

I want to get more people out of their field and into the flight deck. There are so many great people who are flight attendants, agents and rampers who just need that nudge,” she said. “I can’t tell you how many flight attendants have come to me in the past month and want to know how to become a pilot.”

Eckert is talking with flight ops leadership about how Alaska can make it easier for employees in other workgroups to become pilots, whether it be scholarships or leaves of absence.

“Ali is the epitome of an Alaska pilot – a skilled aviator who also cares deeply for our guests and our coworkers,” said Chief Pilot Scott Day. “Pilots throughout our system have watched her chase her dream, and we’re honored to have her join us in the flight deck.”

When asked if she ever considered getting behind the controls at another airline, Eckert is steadfast: “It’s always been Alaska.”

From the lounge to the cabin: Elissa Maples loves taking care of people and making Alaska the airline people love.

Nearly three years ago, Elissa Maples was greeting guests in Alaska’s Lounges. Today, she’s bringing that same smile and energy to the skies, fulfilling her long-time dream of becoming a flight attendant.

“I’ve been fascinated by everything aviation since I was a kid and there was always a part of me that wanted to be involved in that. I tried the office thing for a while but I just couldn’t do it! I absolutely love people and being stuck staring at a computer was draining me. I wanted a change and I think I found the perfect career to combine all those things into one,” she says.

Maples joined Alaska shortly after the pandemic began. She says while it wasn’t the most normal atmosphere in the airport, the things that have stuck with her most are the chances she got to go above what was required and really turn someone’s day around.

We had one guest in the lounge ask me if I could draw a dragon in his latte. I tried so hard but just couldn’t pull it off. I’m not the kind to give up so I kept practicing. Finally a few months ago, I saw him come through and without hesitation I brought a latte with a beautiful dragon over to his table. This huge smile came over his face and he shared with me how he has been telling all his friends about the latte dragon request for the last two years. Those are the moments I live for and that make me feel like I will be doing this job for a really long time,” she said.

In light of international Women’s Day, Maples says it’s important to be strong, be yourself and stand with those that may not have the same voice or opportunity that you do.

“Everything we do is built on the foundations laid by those that came before us,” Maples said. “Taking some time to reflect on and honor what those women did and all the amazing work that is still being done by all those around us helps me to feel inspired to build a better future for those that come after us. I believe that each and every one of us can play some part in that.”