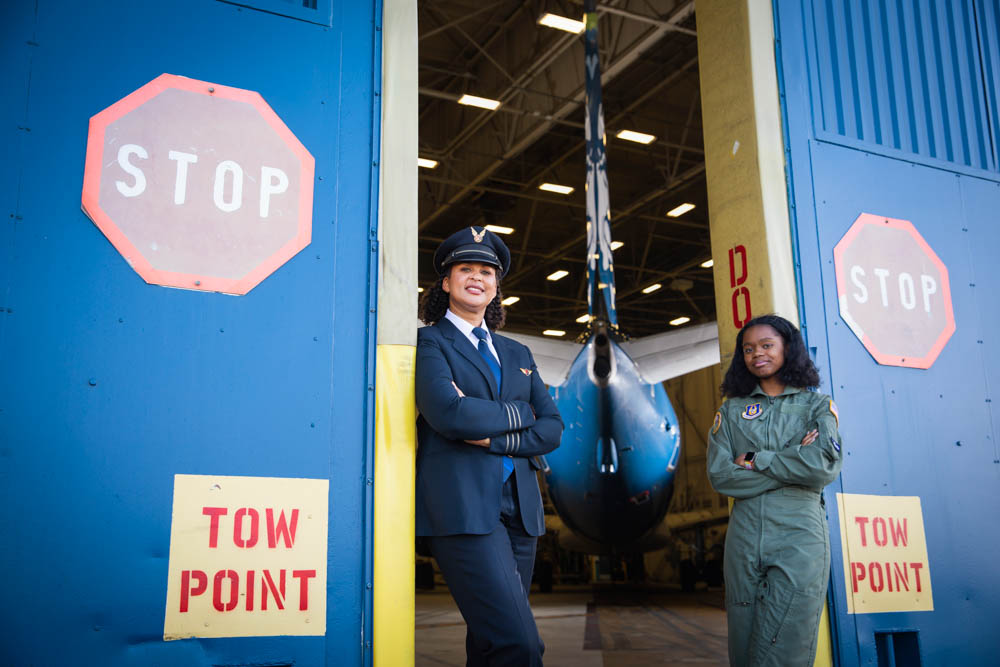 The first time London Holmes flew a plane, she navigated past Santa Monica and out over the ocean. She peeked at the instructor to see if he was nervous — and caught him looking down at his phone. “It was really cool to see that he trusted me,” Holmes says. She took in the view of the blue waters and the coastline. “It was so pretty. I realized then that this is definitely for me.”

Now 17, the Sammamish High School junior is a mere two weeks away from her check ride — the “final exam” to get her private pilot’s license. It’s a milestone for any aspiring pilot, but for Holmes, it’s just one step in the path toward her ultimate goal of becoming a military pilot. “I really want to fly fast jets,” she says.

Holmes is following in the footsteps of one of her mentors, Kim Ford, an Alaska Airlines First Officer and Sammamish High grad who attended the Air Force Academy. Ford’s 25-year Air Force career included service in Afghanistan and Iraq, and she retired from the military as a Lieutenant Colonel. She has been flying for Alaska Airlines since 2001, starting her commercial airline career while still serving in the Air Force Reserves.

Holmes and Ford discovered they shared the same high school and a passion for military jets when they met at a regional Women in Aviation conference at The Museum of Flight in 2016.

“I was just blown away that there were all these parallels and that she had this interest level at such a young age,” Ford says.

She’s thrilled Holmes has taken advantage of opportunities available through The Museum of Flight and other organizations that now put aviation training in reach for many young people, including programs encouraging young women and people of color to explore careers in flight.

“They just didn’t have this wide variety of programs in the ‘80s,” Ford says. “I wish I could have soloed before I went to the Academy. I wish I could have had my private pilot’s license. London has been able to do all of those things that will propel her toward the higher echelons of success.”

Aviation Day: The Need and the Possibilities

One of the opportunities for students like Holmes is Alaska Airlines’ Aviation Day, which brings more than 1,200 young people from around Western Washington to the Alaska Airlines hangar at Sea-Tac International Airport. They get to meet pilots, engineers, flight attendants and technicians who work in a range of aviation jobs at Alaska, Boeing, the FAA and the Port of Seattle. They also can connect with educators, military representatives and corporate recruiters to chart potential career paths. Aviation Day is possible because of the efforts of Alaska employees who lead the event, along with partners including Boeing, Port of Seattle, Aerostrat, the Boy Scouts, Girl Scouts and The Museum of Flight.

Now in its 11th year, Aviation Day on Saturday, May 4, allows students to get up-close to 30 different aircraft, including several military planes and a refurbished DC-3, which will be used for a World War II D-Day reenactment in France next month. The teens also can check out a 737 flight deck with pilots, look into a wheel well with mechanics and kick the tires of an F-18 or Lockheed Martin KC 130.

This will be Holmes’ first time attending Aviation Day, while Ford has volunteered multiple times: “I love to see kids walk into the 737, and they are so excited to go up to the flight deck and to sit in the pilot and co-pilot seats, and look at all the displays,” Ford says. She encourages students to not be limited by preconceptions of who can work in aviation. “There’s room in the military and in aviation for everyone to be able to lend their talents and to enjoy it,” she says. “Have courage. Reach for the sky.”

With a looming pilot shortage, airlines have an urgent need to inspire more young people to pursue aviation careers. In the next seven years, more than half the current commercial pilots in the U.S. will reach the mandatory retirement age of 65, and Boeing projects that in the next 20 years the industry will need 206,000 new pilots working in North America. Because women currently hold just six percent of the commercial pilot jobs in the U.S. — and African-American women hold only about one-half of one percent of all pilot jobs — Alaska is especially committed to helping passionate young women like Holmes find their way into aviation careers.

Ford and Alaska’s Black Employee Advocates and Allies group are helping Alaska significantly increase the number of female African-American pilots by 2025, a commitment made with the nonprofit Sisters of the Skies. And more than 170 Girl Scouts will attend Aviation Day this year.

Aircraft Maintenance: Getting in at the Ground Level

Brendan Cray remembers “geeking out” at the 2011 Aviation Day, which set him on the path to his current job as an aircraft maintenance technician at Alaska Airlines. Back then, he was a junior at Kentwood High School in Covington, Washington, who loved working on cars, and he saw an Aviation Day poster at the school library. At the event, he met some Alaska mechanics, toured Aircraft 569 (which is still in service) and got a look inside a 737 wheel well: “It’s amazing. Pipes, hydraulic lines, hydraulic fuses. I thought, ‘Imagine knowing what each of these lines goes to. Wouldn’t that be incredible to possess that knowledge?’”

After high school graduation, he started in South Seattle College’s Aviation Maintenance Technology Program, working his way through school while living at home. After graduating a little over two years later, he was hired by Alaska within three months. For students worried about costs, he points out that his education and testing costs came to about $16,000 over two years — less than a single semester’s tuition at some four-year universities. And aircraft maintenance technicians start off with good wages, Cray says. “The rate of return is huge.”

The opportunities for people who share Cray’s passion for plane mechanics are growing at Alaska and Horizon Air because more than a third of the airlines’ current maintenance technicians will be eligible for retirement in just three years. And when Cray gets the chance to volunteer at Aviation Day, he looks for those students whose faces reflect the same level of excitement he felt when he first looked inside a wheel well.

“It’s nice to know there are people who love planes as much as me,” he says. “You never know where aviation can take you. And there’s no greater feeling than waking up every day to go do something you love.”

“There are so many people who want to help”

Holmes urges young people who might want to try flying to start with programs like the Private Pilot Ground School at The Museum of Flight. And she shares a list of other resources, including educational organizations and scholarships. (Check out Holmes’ list) “It’s the perfect time to become a pilot,” she says. “Especially for teenagers and young adults, there are so many scholarships out there. There are so many people who want to help.” The costs of her own private pilot training have been covered by a scholarship from the LeRoy W. Homer Jr. Foundation.

Holmes keeps a sharp focus on her goals and takes Aeronautical Science Pathway courses after school. She’s looking forward to a summer internship at Boeing, where she’ll see how the Navy P-8 Poseidon is made. “It’s basically a 737 that carries missiles,” she says. “It’s pretty cool.”

But first, that check ride coming up on May 18. Holmes has a waitlist of passengers eager to fly with her. At the top: her mom, Sherrie Holmes. “Being around people who support you and believe in you is very important,” London Holmes says. “My mom is always there, uplifting me.”