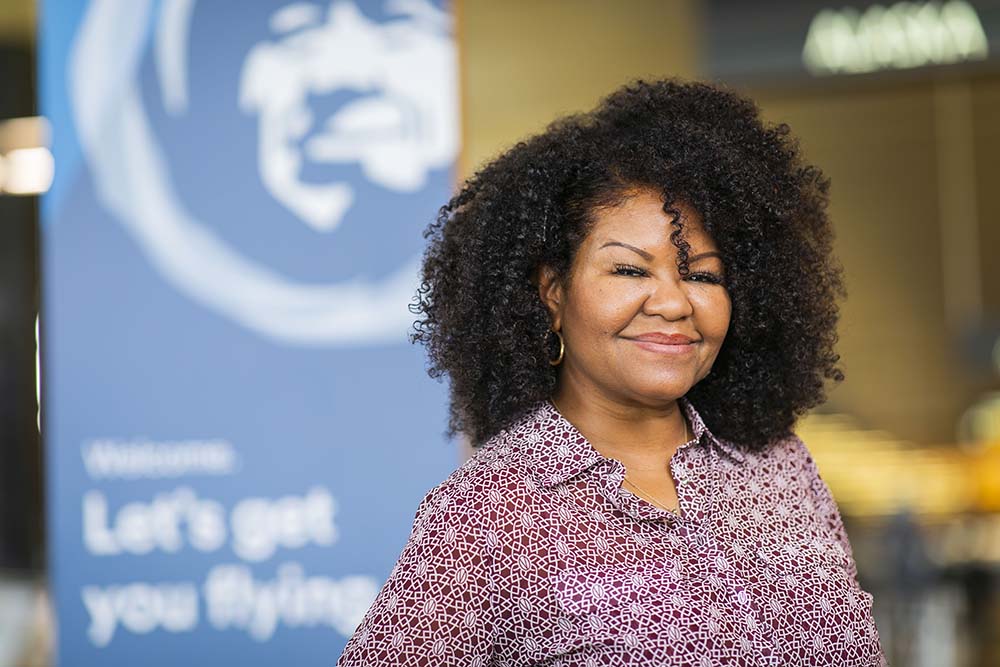 Fifty-seven years ago, Shepherd’s mother, Georgia, an accountant at the Pentagon, joined 250,000 people in front of the Lincoln Memorial to hear Dr. King deliver his “I Have A Dream” speech. Shepherd will always remember her ‘silently strong’ mother telling her about the experience of that moment.

It’s something that will be a legacy in my family. We show up,” said Shepherd. “I’m proud of her. I hope my grandchildren can say ‘my great grandmother, my grandmother stood up for equality and I will too.’”

Born in the 1920s, Shepherd’s mother lived through some of the more difficult times in our history. Nearly two years after Dr. King’s speech at the March on Washington, segregation ended and Black Americans were given the right to vote. Dr. King’s words sparked not only hope in Shepherd’s mother that day but made a lasting impression on Hilda.

It was just as important then as it is now,” Shepherd said. “For Black Americans to continue to strive for equity. It’s really important for the survival of our race to make sure that people understand that there are inequities. There are injustices.”

Shepherd has spent a lot of time reflecting this year. Thinking about where we’ve been and where we have to go.

“It’s been a very tender time in our society … This MLK 2021—the celebration of what he has done for us—means more for me then it ever has before because of all the things and emotions that have been stirred up in our country’s unrest and division this past year,” she said.

Shepherd began her career at Alaska Airlines in 1999 as a customer service agent in Anchorage, Alaska. She later transferred to Oakland, California, where she trained to become an aircraft mechanic. She continues to be a leader and pushes for diversity and racial equity within the company.

You have to have a dream,” she said. “If you don’t have a dream, you won’t work as hard to make things happen.”

After several years of working as an aircraft mechanic, Shepherd transferred to station operations, where she leads a behind-the-scenes team whose goal is to keep the operation running smoothly. She says a key to being a good leader is to make it easier for your team to be successful by removing obstacles—a crucial part of building racial equity in a company.

We have to continue to make sure to honor Dr. King and the life that he led. We have to continue to strive for advancement. We’re not asking for anything above and beyond,” said Shepherd. “We’re just asking for basic human dignity and decency. Please respect and treat and honor us and create laws that say we are equal Americans. That’s all that anyone has ever asked for—nothing more, nothing less.”

At Alaska, we’ve been listening to and learning from our employees, reflecting – and taking a hard look and sharing our commitments to advance racial equity and justice at our company and in our communities. Shepherd and other leaders at Alaska recognize there is still a lot of work to be done, but we are taking steps with policies, education and training, recruiting, and community partnerships, and we recognize that it is a journey.

We have a better point of view when we have a more diverse team,” she said. “If you have all one mindset, you can’t move the needle.”

“I don’t want the dream to ever die. I want the generations behind me to know how important it is to exercise their rights, their votes. To continue to strive for equality—to be treated as one would want their own to be treated,” Shepherd said. “For as long as I live, I’ll show up and keep spreading his message.”

As we celebrate and honor the legacy of Dr. Martin Luther King Jr., Alaska Airlines employees came together to create this powerful 4-minute video, reading a passage from Dr. King’s 1963 speech to a crowd of 250,000 in front of the Lincoln Memorial. It continues to serve as a powerful reminder that we can all make a lasting impact on those around us.