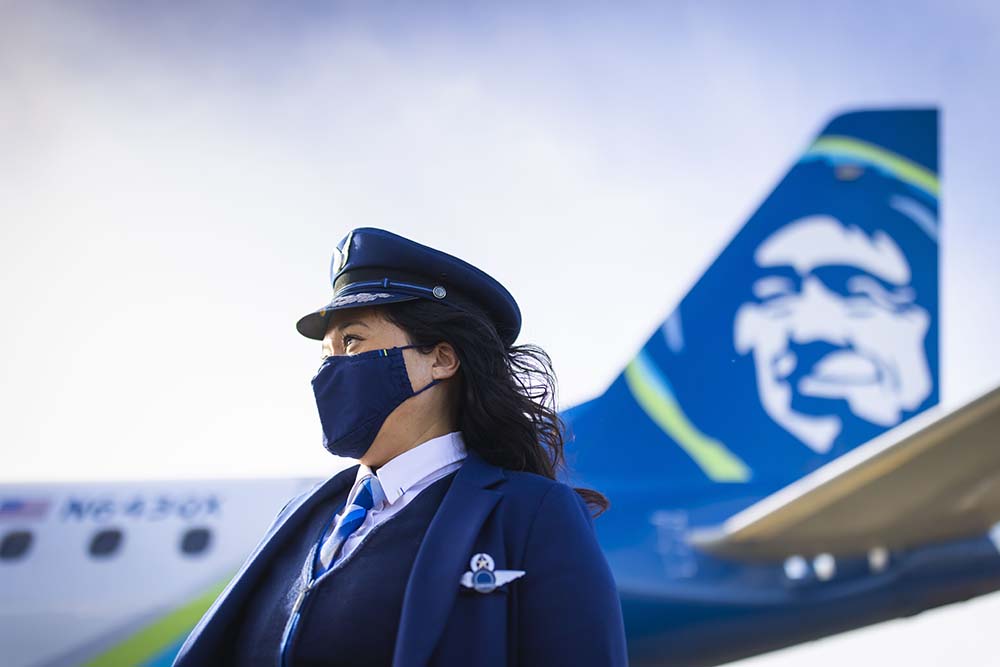 Chances are, on any given flight, your pilot isn’t a woman—an irking approximation both Captain Kat Pullis and Kisa Wiley hope will change during their lifetime.

Women in the flight deck remain somewhat of a rarity: Only about 7 percent of commercial airline pilots in the U.S. are women. However, Pullis and Wiley want the industry to celebrate how far it’s come in recent years and set an example for future generations of women in aviation.

We are rare, but for us to be successful in whatever we choose to do is not.” — Captain Kisa Wiley, Base Chief Pilot, Horizon Air

Both pilots agree the path to becoming a pilot is not always linear, and the aviation industry still has work to do to reach gender and racial equity.

As a company, we celebrate their unwavering tenacity, achievements and paving the way for women alike in the industry every day, especially today, International Women’s Day.

Captain Wiley didn’t always dream of becoming a pilot. Fate has a funny way of putting you in the right place at the right time.

While studying Art History in college, her sister asked her to go to ground school with her—to take classes to gain all necessary aeronautical knowledge before flying. That fall, she turned in her history books for a pair of wings at Embry-Riddle Aeronautical University, the world’s largest, fully accredited university specializing in aviation and aerospace.

Today, she is a captain and base chief pilot for Horizon Air, Alaska’s regional airline, which she has been part of since 2015. When she’s not flying, she is the first point of contact for management when a pilot needs something—similar to an HR representative. She helps pilots navigate medical appointments, jury duty, a death in the family or answer questions they may have about X, Y and Z.

“My favorite thing is being able to make a difference for somebody,” Wiley said. “Because I’ve been that pilot who needs something and it might seem like a little thing, but it can mean a world of a difference to them.”

Captain Pullis, also a base chief pilot, is the first female to assume this role at Alaska Airlines. Her path to aviation was a bit different. Growing up in Hawaii on Oahu, she looked at travel as a way to spread her wings and see the world.

She says her strength and inspiration come from her Hawaiian ancestor Queen Ka’ahumanu, who removed taboos and barriers for women in Hawaii.

“I named my daughter after her. She means a lot to me culturally and as a female,” she says, and like a queen, Capt. Pullis takes pride in not fitting the mold. “As soon as I embraced my differences, everything worked out. I didn’t have to pretend to be the ‘perfect’ pilot—I just had to be myself.”

Wiley quickly learned that flying came naturally to her—call it perseverance or family genes—both her dad and grandfather were pilots. Her mom also worked for Alaska in the 70s with maintenance and later on as a flight attendant.

Her dad was one of the first Black pilots hired at Alaska in 1975.

“I didn’t really think of my dad as a pioneer growing up; it wasn’t until I was older and started learning about some of the history and some of the challenges and discrimination he may have faced when getting his career started that I realized how impressive it all was,” Wiley said.

Growing up, she says she was fortunate not to be told certain things were for boys or girls.

I realized the upbringing I had was a privilege, not the norm. And that is extremely unfortunate because it should just be the norm to tell people of color or women that they can do the same thing that white guys do,” Wiley said.

When asked what sort of changes she’s noticed since her parents’ day, Wiley says the industry is more welcoming, but there is still more work to improve gender inclusivity and racial equity.

“The number of female pilots has increased, but it’s still a male-dominated field. However, I’ve noticed recruiting has changed, and we’re trying to hire more women of color,” Wilesey said.

As a Black Asian female pilot, Wiley says she was happy to see Horizon and Alaska actually put a plan in action to advance racial equity.

“I was glad to see it extend beyond the period of time when the outrage dies down, and the steps toward progress do too,” she said.

Pullis agrees the field could use more women, but it starts with education and setting realistic expectations like what flying will be like while trying to balance a family and personal life.

“When I first started, I was like ‘I want to fly the biggest airplane around the world and just travel.’ If you were to ask me now, that’s the furthest thing from what I want … I want to go up and down the West Coast and then come home and have dinner with my kids. That’s my priority now,” said Pullis.

Wiley, a mom of two, says finding balance as a pilot can be challenging but isn’t anything she can’t handle. Someday, if her daughter chooses to fly, she would be a fifth-generation pilot — and hopefully her chances of sitting next to a female co-pilot will be much greater.