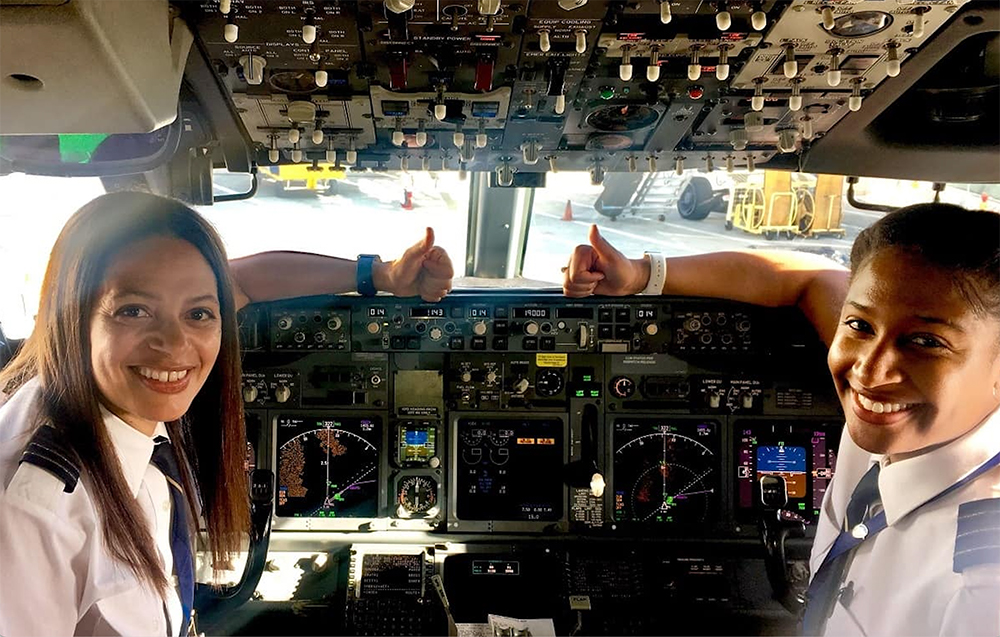 Excerpted from the September/October 2019 issue of Aloft, the magazine of The Museum of Flight. Do you know a middle school girl interested in exploring aviation and aerospace? Sign up for Amelia’s Aero Club at the Museum of Flight.

How do you become a pilot? The best way to find out is to ask one – or better yet, talk with two.

First Officer Mallory Cave and Captain Tara Wright are the first all-women, Black female crew working at Alaska Airlines. They recently took time to share their experiences, explaining that the path to becoming a pilot is not always linear, and the aviation industry still has work to do to reach gender and racial equity. Cave and Wright say pilots benefit from building a support network to lean on when things are difficult – relationships that can last a lifetime – and they see aviation as a rewarding career with exciting changes on the horizon.

Growing up, Cave knew she wanted a job that would be fun and different. “I did always dream of having a job that I enjoyed doing every single day,” she says. “I loved flying as a passenger and one day in high school I thought, ‘I wonder what it’s like up front, to actually fly the airplane?’ ”

But she found the process of becoming a pilot challenging at the outset. “One of the toughest times was initially, when I was going through pilot training,” Cave says. “The flight instructors weren’t enthused to fly any extra days with me, although they would fly extra days with the guys. I kept trying to get someone to fly [with me] so that I could get ahead. I got nowhere.” Cave became the first African American woman to earn a degree in aviation flight from Ohio University.

As she entered the workforce, she continued to see similar inequalities. “In all of my pilot new hire classes, I was the only female as well as the only African American,” Cave says. “The guys in my class would all gather and study together. They would never extend the invitation to me, I had to invite myself to those study groups. I knew I couldn’t do it on my own, there was no time to be shy or reserved.”

Wright, who has been flying since 1993, considered many career possibilities before deciding to become a pilot. She remembers visiting the airport with her family: “My dad would ask me what kind of airplane it was, and we’d make up stories about where in the world it was headed,” Wright says. “The best part was getting to see the reunions people had with friends and loved ones.”

Wright acknowledges that being a part of the first all-female African American flight crew for Alaska is a big milestone, and it would have been impossible without role models and support. “We’ve achieved this only because of the women that have come before us: Bessie Coleman, Patrice Clark-Washington and other aviatrixes who have paved the way,” she says. “Our grandmothers and mothers instilled a sense of confidence that we can do whatever we want with our lives.”

Wright did not set out to become a pioneer, but became one nonetheless: “As one of only an estimated 150 African American female pilots in the United States, I have racked up a few firsts,” Wright says. “I view each one as a major accomplishment in a world where it often seems most everything has been done.”

And now, the need for pilots is greater than ever. A 2016 report from the Boeing Company predicts that 42 percent of the pilots flying with major airlines in the U.S. will retire in the next 10 years. The Museum of Flight wants to ensure that the talent pool for these and other aviation jobs is a diversified one. The nonprofit is on a mission to provide world-class STEM education to youth in our community. Using the lens of aviation and aerospace, the museum offers programs from pre-kindergarten through high school. These include Connections, a free youth educational membership for students ages 5 to 18; Amelia’s Aero Club, designed to inspire middle school girls in the exploration of STEA2M (Science, Technology, Engineering, Aviation, Art and Mathematics); and the Michael P. Anderson Program, designed to inspire middle school youth from throughout Washington state to participate in the museum’s education programs while being mentored by professionals of color in the aerospace and aviation industries. For all of its education programs, the museum places a special emphasis on recruiting those who are currently underrepresented in STEM fields: girls, students of color, and those from low-income and rural communities.

And thanks to companies like Alaska Airlines, which supports The Museum of Flight’s Aerospace Education Center, students of all ages can explore aerospace inventions, STEM activities and new technology. The future of aerospace is being written today, and The Museum of Flight offers the tools needed to succeed.

So, what does it take to become a pilot? “Insert yourself! Donʼt try and do it all on your own. Surround yourself with people and mentors in the aviation industry you feel comfortable confiding in,” Cave says. “If you are passionate about aviation, that passion will drive you to become successful.”

With the high demand for pilots and aviation professionals in the coming years, it’s the perfect time to learn what it takes to earn your wings. “Today, kids excited about being airline pilots have the wind at their backs,” Wright says. “The worldwide market is expanding rapidly. What took me 30 years to accomplish, it might take someone just starting out just half the time.”