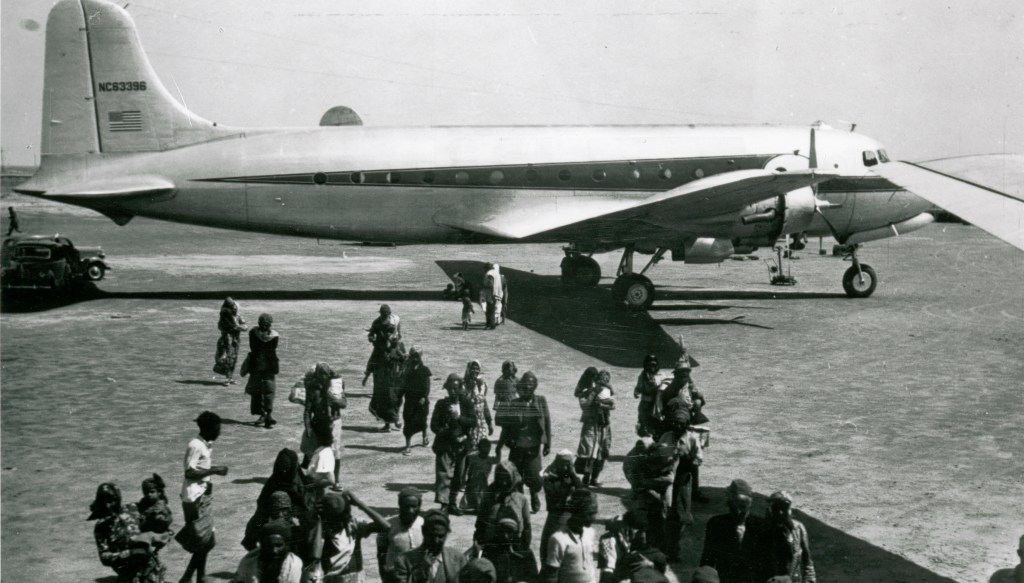 In 1949, the world was continuing to recover from the end of one of the most horrific wars in human history. After the horrors of the Holocaust, Jewish refugees scattered throughout the world were looking to start over in Israel, but the process was not easy. Not only did many groups face logistical challenges, but they also faced a great deal of violence. In addition to Europe, many lesser known Jewish communities resided in the Middle East, in predominantly Arab countries. With the establishment of the State of Israel in 1948, many of them were facing real danger and had to flee. Some 850,000 Jews had to escape from various countries around the Middle East, making their way to Israel in unorthodox ways.

For about 49,000 Yemenite Jews, help would come from an unlikely place – Alaska Airlines.

Thousands of miles away in Anchorage, sat James Wooten, Alaska Airlines’ president. After acquiring war-surplus DC-4 and C-46 aircraft, Wooten was brainstorming creative ways to utilize the new fleet. Wooten converted a few DC-4s to full freighter aircraft to carry cargo in the 1948 Berlin Airlift. But the most creative and noble use would come later in 1949 with a mission known as “On Eagles’ Wings” where the airline would assist in transporting Yemenite Jews to Israel, seeing it as a humanitarian obligation to help people facing grave danger.

Yemenite Jews had been nomadic for centuries. Considered outsiders in Yemen, Yemenite Jews struggled to find a place of their own. Migrating from place to place across the desert, driven away by violence and persecution, the Yemenite Jews were deeply devout. They stuck to Scripture, believing that they would one day be returned to their homeland in Israel “on the wings of eagles.”

But as violence ensued in the region, the fulfillment of that promise couldn’t come soon enough. With the end of the war and Jews migrating to Israel, Yemenite Jews began to arrive in Aden, Yemen – the country’s main port – in the hopes that they, too, could be rescued and returned to their homeland. Many lost their lives along the way, either by disease or starvation, or random attacks by hostile locals. Their escape was vital.

Captain Elgen Long was working for Alaska Airlines as a navigator for its missions overseas. Far removed from the time of radar or GPS, pilots used celestial navigation to steer through the skies. This required the use of sextant (to calculate angular measurements), and a chronometer (to keep time).

In the United States, radio time signals were used to aid in navigation, but overseas, Long needed a chronometer. While awaiting orders in France, he was unable to find a high-quality chronometer, and instead purchased a Rolex watch – which is a certified chronometer – to help him keep time. The watch is still ticking and on Long’s arm today.

From there, the crew made their way to Shanghai, where they began transporting Jewish refugees to Israel. Due to the hostile territory, they could only stop for fuel at British military bases. After a few trips between Shanghai and Tel Aviv, Israel, the crew received new orders sending them to Aden, where they were told a group of Yemenite Jews was awaiting transport.

The crew soon found out that the “group,” in this case, was made up of thousands. And in Aden, there was no place to shelter, protect or feed so many people. When the British military asked how many people the Alaska Airlines DC-4 could carry (48), it was determined that the aircraft in its current configuration would not work.

Upon further brainstorming and calculating, the crew determined the aircraft was more than capable of carrying additional weight, and decided to remove all the seats to accommodate more people. It wouldn’t be a comfortable way to travel from Aden to Tel Aviv, but it would get the job done.

“This was a matter of life and death,” Long said.

By removing all the seats, the Alaska Airlines DC-4 could carry over a hundred people.

Carrying out the mission

Many Yemenite Jews had never flown on an airplane, and even in this life and death situation, they were hesitant. But not because they were not brave – after all, they had been escaping persecution for centuries. First of all, it was a first for them to see an airplane, as such signs of modernity didn’t exist in Yemen. Secondly, the first Yemenite Jews were hesitant to board the aircraft because it was the Jewish holy rest day of Sabbath.

“They didn’t want to fly on the Sabbath,” Long said. “But their Rabbi told them it was okay because this was a life and death situation.”

With their Rabbi’s permission, the Yemenite Jews agreed to fly. The crew fit as many as they could into the aircraft. Long carefully navigated the aircraft up over the Red Sea to avoid any detection or fire from hostile forces. For this reason, the flights were also kept secret.

Long recalled the crew flying back and forth between Aden and Tel Aviv for seven days straight. Running on adrenaline and the determination to do the right thing, they decided there was no time for significant rest during this critical time.

“We’d take turns sleeping,” Long said. “I’d rest and then the captain would wake me up when he needed another navigational reading.”

The airlift would continue through 1950 with Alaska Airlines making more than 430 flights, using two DC-4s and a C-46 aircraft. At the end of the mission, Alaska Airlines had carried 49,000 Yemenite Jews from Aden to Tel Aviv. After decades of persecution, the Yemenite Jews believed God’s prophecy had been fulfilled, as they had been brought back to their homeland “on the wings of eagles.”

Do the right thing

Gratitude is a hallmark of the Jewish faith, with the concept of “Hakarat Hatuv” literally meaning “recognizing the good” in Hebrew. Because the mission was kept secret for years after, recognition wouldn’t come until 2013 when the Alaska Jewish Museum highlighted the historic airlift.

The exhibit, titled “On the Wings of Eagles: Alaska’s Contribution to Operation Magic Carpet,” detailed the story of Alaska Airlines’ efforts to avert a humanitarian crisis.

Shahar Azani, executive director of the Israel Education Organization, StandWithUs New York, said his grandparents and extended family were Yemenite Jews brought to Israel “on the wings of eagles.” Azani learned of Alaska Airlines’ involvement in the airlift when he visited the Alaska Jewish Museum on a trip to Anchorage.

“My family is eternally indebted to Alaska Airlines and its heroic crew who brought us to the land of our ancestors to live in freedom and dignity,” said Azani. “It’s a display of human courage and dignity, which is worthy of our honor and profound respect, and for which Israel, and the Yemenite Jewish community, shall forever be grateful for.”

The event came to life on Sept. 12 in New York City, where Alaska Airlines was presented with the StandWithUs Savior of Israel Award for their participation in the operation. Long received the American Sephardi Federation’s Maimonides Friendship Award, and is the last surviving Alaska Airlines crew member who participated in the airlift. The event also served to share the details of the unique airlift with a broad audience.

While much has changed for Alaska Airlines since the operation, at least one thing remains – the concept of doing the right thing.

“Even as we’ve grown to become the fifth largest U.S. carrier, one of our core values and those held closely by our Alaska Airlines employees is to ‘Do the Right Thing,’” said Tim Thompson, Alaska Airlines manager public affairs in the state of Alaska. “Having answered the call to support the humanitarian efforts of Operation Magic Carpet, nearly 70 years ago, we commend the dedication of the men and women who flew ‘On Eagles’ Wings,’ to do the right thing.”

The exhibit, “On the Wings of Eagles: Alaska’s Contribution to Operation Magic Carpet” can be viewed at the Alaska Jewish Museum in Anchorage from 1-6 p.m. Sunday through Thursday. More information on the airlift can be found at the Alaska Jewish Museum website. Long has also penned a memoir titled, On Eagles’ Wings, detailing his personal experience during the mission. The book is available for purchase here.