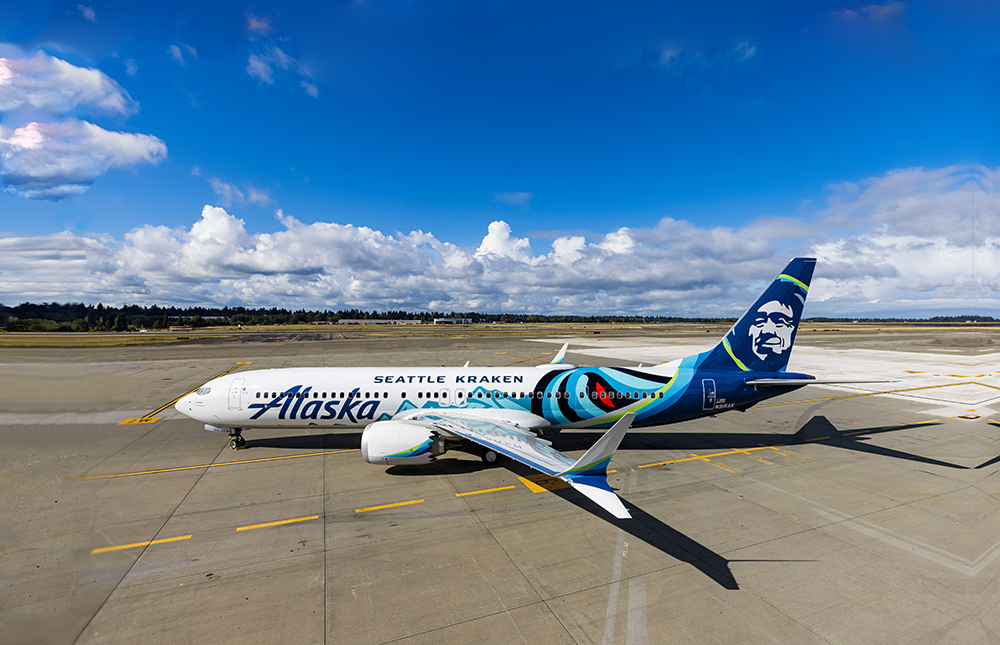 Hockey is back in Seattle! And what better way to celly than a custom plane?

Today, we’re releasing the Kraken with one our special aircraft, which will fly on routes to the team’s away games in cities we serve.

As the official airline of the Kraken, we can’t wait for the first puck drop at Climate Pledge Arena, where our community and guests will get to enjoy the Alaska Airlines Atrium, which will serve as the main entrance for all events at the Climate Pledge Arena.

The plane is just the beginning of a long-term major partnership between us and our new hometown NHL team. See some of the perks we’re offering guests and more below!

As the official airline and founding partner of the Seattle Kraken, we’re so excited for this aircraft to take to the skies and help us cheer on the team during their inaugural season,” said Whitney Ellison, Alaska director of brand marketing. “We’re Seattle’s hometown airline, so we’re thrilled to be part of this historic moment and support Seattle’s first NHL team. Go Kraken!”

Have an ice trip, get early boarding!

It’s time to rally & look fly doing it, Kraken fans. All season long, if you’re flying out of Seattle or Everett and wear a Seattle Kraken jersey, you get priority boarding!

Now, through the end of the hockey season, Kraken fans who wear the teams’ jersey can board early on all Alaska flights departing from the Seattle-Tacoma International Airport (SEA) and Paine Field (PAE).

Located on the south side of the arena, the Atrium spans 36,000 square-feet and feature stories and images reflecting the Pacific Northwest and the travel opportunities within our region and across the globe.

With our headquarters in Seattle, we love giving back to our hometown and connecting Seattle to the world,” says Sangita Woerner, VP of Marketing. “This partnership is no exception as we’ll work closely with the Kraken to create a variety of initiatives that benefit our community, beyond events at the Climate Pledge Arena.”

We can’t wait to cheer on the home team and share some special surprises we have up our wings this season. Follow @alaskaair for your chance to score big in the future!

Related: Alaska and Kraken team up to donate hockey sticks to local youth

Related: We’re the official airline of the Kraken!