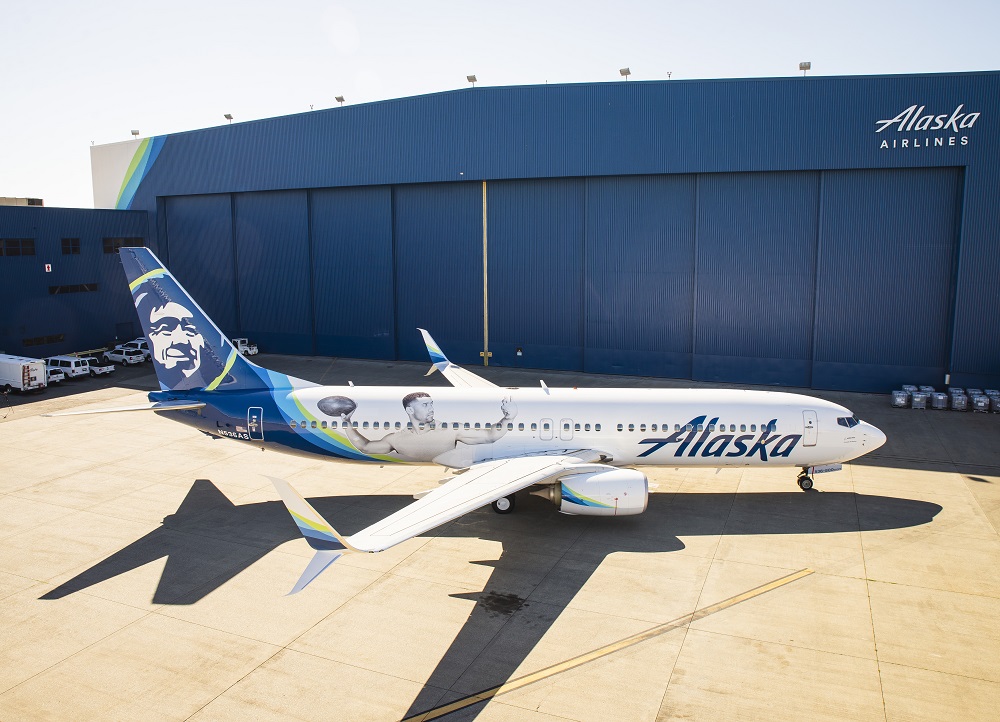 Forget what the playbook says: tailgating starts at the gate.

Seattle football fans flying to the regular season opener in Denver are in for a treat this Friday. Gate C9 at Seattle Tacoma International Airport will be decked out in blue – and a new Russell Wilson plane will be waiting at the end of the jetway.

The Boeing 737-800 features Wilson’s tagline, “Dream Big. Fly High.” above the aircraft door. The tagline is a reminder of what our partnership with Seattle’s star quarterback is about – celebrating our hometown football fans and building a strong local community.

“At Alaska, we don’t just care about the laws of physics lifting a plane into the air – though that’s remarkable no matter how old you are or how often you fly. We know are all better off when we can create lift together, across communities,” says Diana Birkett Rakow, Alaska Airlines vice president of external relations. “Our guests and partners, including our Chief Football Officer, inspire us to invest in the next generation – to champion young people, to show kids a path to aviation jobs or whatever their goals and dreams may be.”

Through the Russell Wilson Passing Academy, Wilson hosts a football camp to develop young players. But football isn’t the only way he coaches kids; Wilson volunteers regularly at Seattle Children’s hospital as part of the Strong Against Cancer campaign to end childhood cancer.

Allison Broadgate, director of Strong Against Cancer, says Wilson has, for several years, been visiting patients at Seattle Children’s hospital every Tuesday during the football season. He’ll spend time with three to six children each time, and when Broadgate informs them a special guest is about to arrive, she says their eyes will bug out, and some will ask expectantly, “Is it Russell Wilson?”

“I would love people to know how truly genuine Russell is and how really, truly amazing he is with our patients and their families,” Broadgate says in Alaska Airlines Beyond Magazine. “He’s not afraid to walk into the room and be with these kids and give them the same kind of inspiration he gives on the field. That is a gift for each and every one of them, and for the hospital.”

At his core, Wilson believes in possibility, in drive, and in the underdog. He believes everyone is capable of whatever they set their mind to if they set clear goals, surround themselves with positive influences and choose their future.

In 2014, this drive led Wilson to launch the Why Not You Foundation. The goal is to empower and inspire kids to dream big, believe in themselves and have a “why not you” attitude. The foundation raised nearly $1.4 million while hosting a concert featuring Ciara, Macklemore, Ryan Lewis and the Seattle Symphony at Benaroya Hall this past May.

At this year’s event, Wilson surprised 13 young leaders with college scholarships. These kids are future community organizers, scientists, engineers and nurses – and some will be the first in their families to attend college. Afterwards, one young woman handed back her check because she wanted to support someone who needed it more. Her selflessness and Wilson’s drive give us hope.

In fact, Wilson’s interest in education and youth development was a major reason Alaska forged and extended a multi-year partnership with the quarterback.

As dedicated as Wilson is to charitable work, he is also committed to a future beyond football as an investor and business owner. In 2017 he started TraceMe, a company focused on connecting fans to athletes and celebrities, with Amazon founder Jeff Bezos, Alibaba co-founder Joe Tsai and YouTube co-founder Chad Hurley involved, as well. He co-founded the Good Man Brand men’s clothing line in 2016, launched West2East Empire, a brand-management company, and holds equity interests in Luvo (a frozen-food company), Juice Press (an organic food company) and The Players’ Tribune (a media company that gives athletes a platform for connecting with fans, founded by Wilson’s favorite athlete growing up, Derek Jeter).

Such varied interests, each embraced with the same level of passion Wilson exhibits on the field, have earned him a high level of respect.

“Russell is just a great person. You see it in the everyday world around him,” says Seattle receiver Tyler Lockett. “He’s the same off the field as he is on the field. To me, since I got here, he’s been like a big brother, kind of showing me the ropes and introducing me to opportunities that a lot of guys in the league may not ever get. I learn a lot from him, different ways to go about things, whether it’s in football or marketing or things in life. Whatever it is that we’re talking about, he’s already given me a lot I can carry with me.”

As he looks forward, Wilson says he’s grateful for experiences that will help him be a better leader, athlete, husband and father.

This story is adapted from the September 2018 Beyond Magazine cover story by freelance writer Jim Caple. Top image by Rochelle Bergstrom.