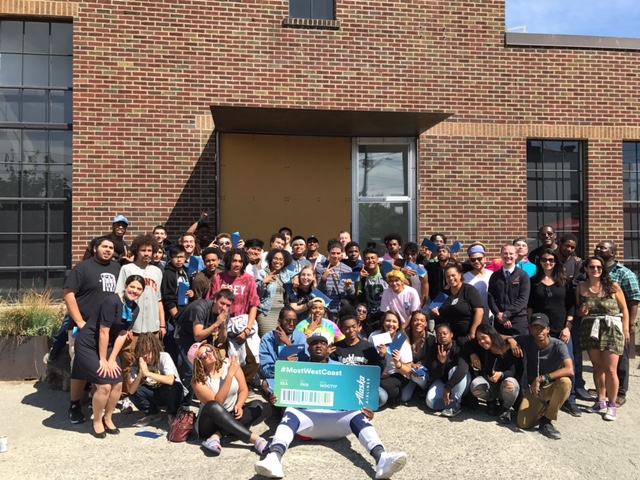 Alaska Airlines surprised all of the participants  from The Residency program with a trip to Phoenix to see Macklemore perform live. See highlights from their trip below:

And on Aug. 16, the beats coming out of the suite sounded like something you’d hear on the radio or streamed on Spotify, but while the city continued to bustle below, it was students in the Residency program who were up above in the suite, recording their first professional tracks.

The Residency program, started in 2015 by Macklemore and Ryan Lewis, along with MoPOP and Arts Corps, provides a fully-funded, high-value arts instruction program for underserved youth in the greater Seattle area.

“There are so many talented young people that just need opportunity and confidence,” Ben Secord, the Residency’s program director said. Secord also serves as Macklemore and Ryan Lewis’ director of philanthropy and community engagement.

The Residency focuses on young people who may not have access to arts programs in their local schools nor the financial means to pursue their hip-hop dreams. For one month in the summer, the Residency is like a full-time job. Students meet Monday through Friday from 10 a.m. to 4 p.m. for intensive instruction on two tracks: vocals and production. The vocal track focuses on lyricism, rhyme structure, and delivery. Production covers media literacy, beat-making and song construction. Youth are then separated into song groups, where vocal artists and production artists collaborate to create original content.

“One of the coolest things is when you see groups knowing each other’s songs and they start singing along,” Secord said.

The program culminates with the young artists professionally recording their tracks, this year at the W Sound Suite, and then performing on stage at MoPOP. Upon successful completion of the program, students receive a $500 stipend, and continue to meet monthly for six months for further instruction.

“It’s a huge commitment and a very stringent application process,” Secord said. “We require they fill out an application, submit some of their own work and come in for an interview.”

While youth at the Residency are learning about producing beats, writing songs and promoting their business, they’re also learning important lessons that transfer to other aspects of life.

“We view hip-hop as the vehicle for youth development and personal growth,” Secord said.

One of those youth is Ivanna Garza, 16. She participated in the Residency in its inaugural year, as the youngest of just 18 youth in the program. Today, she’s still one of the youngest, but has emerged as a leader after three years of experience in the program. While naturally musically-inclined, Garza was a bit hesitant about producing and performing hip-hop.

“It was scary at times, and I’d suggest something and someone in my group would say, ‘No we’re not doing that,’” Garza said. “Now, I’m still one of the youngest people here, but I feel like I’ve found my voice.”

“It was like trying really good cake,” Garza said of her first experience with hip-hop. “Then taking a bite and wanting more.”

At the Residency, she’s found her passion and a network of support to help her pursue that passion.

“I have mentors and I add most everyone on Facebook,” Garza said. “I might reach out to someone with a song I’ve written and ask if they have a beat, so when the summer is over we can all keep collaborating.”

Ralph Redmond, 19, comes from a musically-inclined family and has experience performing in musicals and singing in his church. Redmond participated in the Residency program in 2016 and this year has returned as the program’s intern.

“I started rapping at a very young age,” Redmond said. “I’m passionate about rapping and want to learn as much as I can.”

As an intern, Redmond is not only furthering his own music instruction and professional development, but also becoming a mentor for youth currently in the program.

“For my next step, I want to rap, perform and expand my audience,” Redmond said. “And I also really like the behind-the-scenes work like scouting new talent.”

One of Redmond’s most memorable learning moments was before his group’s live performance at the Museum of Pop last year. They were required to do their own marketing to make sure there was a crowd at their show.

“When you’re starting out that’s how the shows go,” Redmond said. “It’s all self-promoted and you’ve got to tell people about it, so we did.”

The professional teaching artists at the Residency have deep roots in the Seattle music industry, which has allowed the Residency to provide high-quality music instruction and pipelines to internships.

“Just the blessings they are giving out here is incredible,” Redmond said.

Alaska Airlines is sending Garza, Redmond and the 43 other youth artists in this years’ Residency program, and their chaperones, to Phoenix to see Macklemore perform live in October. Alaska is covering the flights, hotel and transportation expenses to and from the event.

“I think this will be a full-circle moment for them,” Secord said. “Seeing an artist who started when he was just 14 and seeing his level of professionalism will make a lasting impression.”

The surprise was unveiled on Wednesday, Aug. 23 at a reception at Ciudad in Seattle. Macklemore himself, along with several Alaska Airlines employees delivered the good news.

“Do you even realize what Alaska Airlines has just given us?” said Redmond. “Oh my gosh. This is huge.”

Alaska Airlines’ support of the Residency is part of the airline’s ongoing commitment to youth and education. Headquartered in Washington’s King County, Alaska in 2016 provided over $6 million in support for its neighbors throughout the state and continues to support youth and education efforts across its route network.