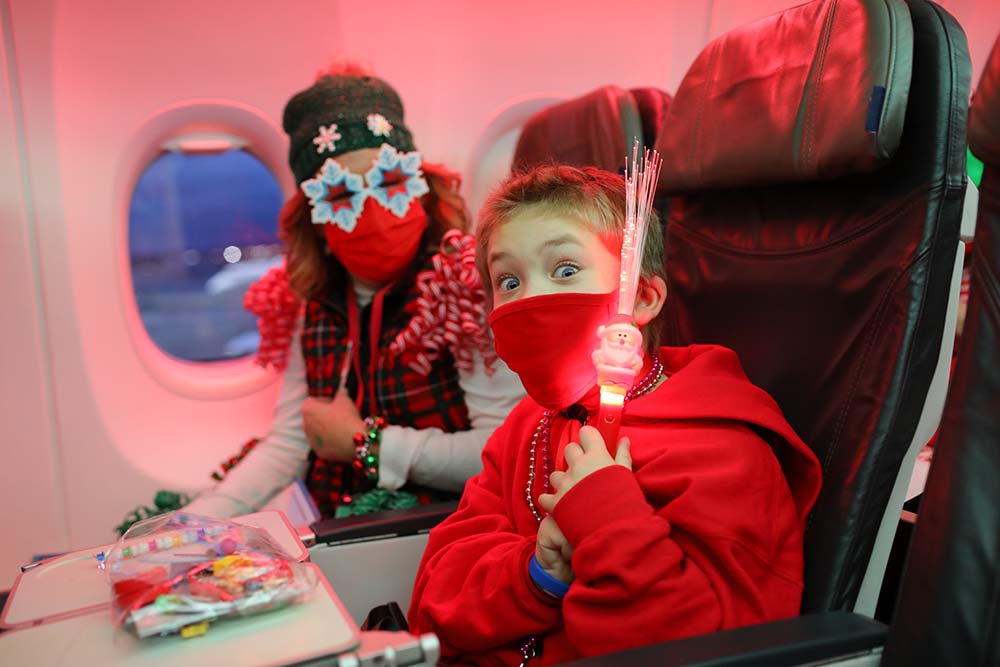 Elf "Snowflake" with Lucian onboard Alaska's Fantasy Flight to the "North Pole." Photos by Genna Martin.

Alaska Airlines flew an unusual and truly magical 40-minute charter flight Saturday afternoon from Spokane International Airport to the “North Pole.” For many, it was their first time on a plane—and for all, it was extraordinary.

Inside the festive “Merrier Together” Starbucks-themed aircraft, 58 beyond-excited kids, ages 4 to 10, came together from the region’s homeless and at-risk youth populations to celebrate the holidays in a big way. Their seatmates were special elves sent to escort them specially to the North Pole for a visit. I jumped at the chance to tag along to report on the adventure as an embedded elf, nicknamed “Notes.”

The day of the flight, I tried my best to blend in with the experienced band of pointy-toed, glittered, and jingle-belled elves with names like Ember, Sugarplum, Sprinkles, Seesaw, McJingles and Ginger Beans. Together, we waited for five school busloads of kids to arrive at the Spokane airport.

I was a bonus elf for Lucian, a 6-year-old child, who was paired with “Snowflake,” also known as Mary Shea-Ferger, one of the many Alaska and Horizon Air employees who volunteer for the event each year.

“Just remember you’re an elf,” she told me, “Try to have fun. Remember what being a child was like. And focus on making this an unforgettable, wonderful memory for a kid who may not otherwise have a great Christmas.”

When the kids arrived at the airport lobby, they were met with a sea of elves and live holiday music courtesy of the Inland Northwest’s Rainbow Fiddle Kids. Some children were understandably nervous and wary at first, but Lucian greeted Snowflake with a big hug.

Once he was fitted for an “I Believe” t-shirt, and filled his North Pole passport with elf autographs, he was ready to fly! Lucian had never flown on a plane before or visited the North Pole before—but said he looked forward to both.

Snowflake, Lucian and I breezed through security and headed up the escalator to a decorated gate area where games, snacks and backpacks filled with school supplies, socks, hats, flashlights and small toys were waiting for everyone.

Anticipation for the flight was palpable.

This is my one of my favorite things,” said Carole Scallon, a senior Alaska flight attendant who has been on every Alaska-hosted Fantasy Flight, “I love being able to help make the event special for these kids.”

During the flight, everyone’s window shades remained closed (to keep the North Pole route a secret). Before we knew it, Santa’s Pilot (Captain Hrivnak) came back on the intercom to tell us Santa’s sleigh has been spotted on radar and we’d be going very fast, at “ludicrous speed,” to catch up to him so they could guide us to the North Pole.

It feels so weird like I’m in a dream,” said Lucian as the plane touched the clouds.

When the plane’s front door finally opened, we were greeted by a horde of elves lining the stairway and walkway to a private hangar, which magically transformed into the “North Pole” for the night. Lucian, beamed with joy as he stepped off the plane, high fiving the elves as they welcomed us ‘home’ to the North Pole. He raced around the whimsical new world, checking out every corner as soon as the doors opened.

Santa and Mrs. Claus welcomed guests, followed by lots of fun at craft tables, activity stations and an all-you-can-eat ice-cream bar. Mrs. Claus’s Kitchen was also there, with shelves stocked with decorated cookies, chocolate, cotton candy and other treats.

Best of all, Santa surprised the kids with a giant bag of gifts they wished for, from pink Barbie Dream Campers and guitars to Robot Batman, Legos, Slime studios and more. Lucian was given a pair of radio control laser tag cars in his bag and said they’d be great for his brother, and declared the evening “the best night ever.”

Noah Stiles, the 29-year-old North Pole DJ, named “Jamz,” recognized the excitement Lucien and the other kids were experiencing. He went to the North Pole on a Fantasy Flight when he was about 10 years old.

I was convinced we’d landed at the North Pole,” he says, “And meeting Santa was exactly as I imagined.” Getting gifts of everything from Lincoln Logs to socks was a real treat, but so was the giant bag he was given to take away all his loot.

“As a foster kid, you’re often given trash bags to move your stuff,” says Stiles. “The really well-made green bag I got became very special to me. I used it to move my belongings from placement to placement until I aged out of the foster program, and I still have it.”

When the evening winded down, Mrs. Claus gathered the children and the elves to read aloud her favorite storybook, The Polar Express, by Chris Van Allsburg, which tells the story of a boy who travels to the North Pole by train and learns the importance of believing. As one final gift (to nod to the story), each child received a large silver jingle bell from their elf.

When the evening wrapped, and it was time for the kids to make their way back, the elves escorted their new little friends to the “Magic Transporter,” a decoratively foggy room made to look like a portal back to reality.

Lucian exited the portal, bound for the awaiting bus. And just when we thought he wouldn’t look back, he ran up to the bus window as quick as he could to wave goodbye to Snowflake and me one more time.

Both exhausted and filled with gratitude, we will forever be grateful knowing we helped deliver a memorable holiday for him—one he and the other children may never forget.

“Notes” sure won’t forget the magic! ✨

Fantasy Flight requires juggling thousands of details each year. This year, with COVID-19 top of mind, Alaska Airlines/Horizon Air and Northwest North Pole Adventures ensured all safety-protocols and precautions were met to ensure the safety of attendees.