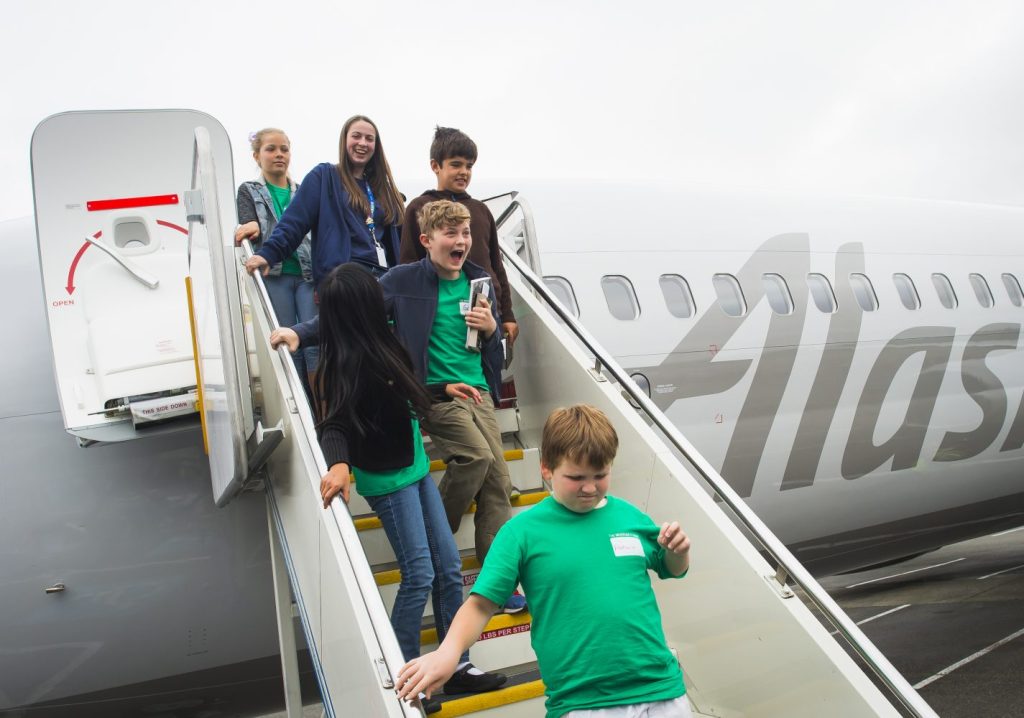 Campers from the Museum of Flight's Aerospace Camp Experience arrive on the first passenger flight of Alaska Airlines' brand-new, custom painted "Celebration of Boeing" 737 on June 30, 2016.

Twenty-five fourth and fifth graders recently had the flight of their lives. They were part of a select group of people invited to be on the very first passenger flight of a brand new Alaska Airlines 737-900ER with a special paint job celebrating Boeing’s 100th birthday.

The students were part of a summer camp at the Museum of Flight that encourages youth to pursue degrees and careers in science, technology, engineering and math (S.T.E.M.). Joining them on the flight were four former governors of Washington along with the CEOs of Alaska Airlines and Boeing Commercial Airplanes to experience a flight of a lifetime.

Excitement was at a fever pitch as campers boarded the aircraft. The first thing that caught their attention was how shiny the plane was; few people have the opportunity to see the sun reflect so sharply off of the wings and fuselage, or smell that “new plane smell.” Every camper marveled at how shiny and untouched the plane appeared.

Cheers abounded as everyone found their seats. The campers each received a pair of golden flight wings to commemorate the experience.

Once everyone was settled, the campers were so excited they all screamed in unison “I love flying” at the top of their lungs to Alaska CEO Brad Tilden.

Soon after, the pilot stood at the front of the cabin and spoke over the intercom welcoming everyone to this very special delivery flight. He explained the flight path for the quick 35 minute flight then headed to the flight deck to prepare for takeoff.

“I’ve never been on a plane before,” said camper Alexi Gonzalez. “I’m excited to go really fast and for being above the clouds.”

The next thing he knew, the plane was rolling down the runway on its way to Boeing field. Campers gasped as the momentum pushed them deep into their seats. Gonzalez’s face beamed with excitement as the plane lifted off the runway and headed for the sky.

“Takeoff felt weird, it felt funny,” said Alexi. “But I want to do it again.”

After takeoff from Sea-Tac airport, the plane flew south to circle Mount Rainier, which was camper Jessica Rugland’s favorite part.

“This is my third time flying. The coolest part for me is looking out the window and passing Mount Rainier,” she said. “Takeoff was really cool. I like it when it goes really fast. But, my favorite part is when it goes down, it’s like a rollercoaster.”

Camper Nicholas Vlasceanu was excited, too.

He especially liked the sharp turns around the mountains and Seattle. On the flight’s descent into Boeing Field and the Museum of Flight, it flew parallel to downtown Seattle and the campers were again captivated, pointing out the Space Needle as they flew by.

Soon after, everyone felt that vibration of the landing gears preparing for wheels down. Each passenger was greeted by Alaska’s Chief Football Officer Russell Wilson and Washington Governor Jay Inslee as they disembarked and walked down the air stairs to greet the awaiting crowd. The campers will not forget this flying experience for a very long time.

“This was super cool for Boeing’s 100th birthday,” first time flier Alexi Gonzalez exclaimed at the conclusion of the flight.