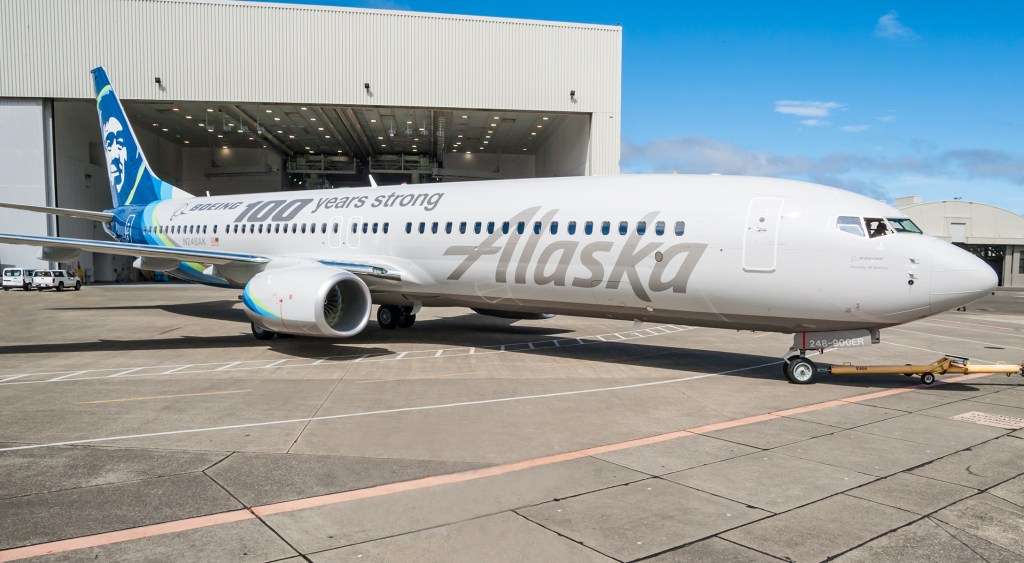 3 p.m. June 30, 2016 update: Broadcast quality b-roll and photos of Alaska’s June 30 Boeing centennial event are available for download at the bottom of this post.

This summer, The Boeing Company celebrates its 100th anniversary. With its Commercial Airplanes division based in Seattle, the company traces its beginning to July 1916, when Bill Boeing and a few fellow engineers formed Pacific Aero Products Company, which was renamed The Boeing Airplane Company in 1917.

Boeing employees include more than 77,000 who live and work in the Pacific Northwest. Together, these folks build incredible airplanes. Boeing is our country’s leading exporter and has been a driver of economic growth in the Pacific Northwest for many decades. Houses have been bought, mortgages paid, kids sent to college and food put on the table—not only for the people who work directly for Boeing, but for untold families and communities that have benefited from the thousands of jobs created to support the manufacture and sale of Boeing airplanes.

With Alaska Airlines’ home base located a mere 5 miles from where our airplanes are built, it has been our privilege to work with and get to know the people who run Boeing. Ray Conner, Boeing Commercial Airplanes’ talented CEO, is truly a hometown guy, having attended Highline High School just west of Sea-Tac. Ray joined Boeing as a mechanic on the 727 program in 1977 and, after serving in a number of roles throughout the company, was appointed CEO in 2012.

Over his nearly 40-year career, Ray has earned a reputation for doing the right thing, both for customers and for employees. Many leaders aspire to this worthy goal, but Ray has actually done it—and it is our honor to know Ray and the rest of his leadership team.

It would be difficult to overstate the impact Boeing has had on the economy of the Pacific Northwest and on aviation globally. If you doubt this, visit virtually any airport on the planet and you are likely to see airplanes built by Boeing employees. From Bill Boeing’s determination to design a more efficient biplane to the launch of the first dedicated passenger aircraft in 1933, to the multi-decade evolution of the 737—the most popular commercial jet aircraft ever made—to today’s Dreamliner, Boeing has had a lasting impact on air transportation throughout the past century.

In honor of Boeing’s 100th anniversary, we painted an airplane in a special livery. You’ll see it flying this month. For those who have worked or provided support for Boeing over the years, this livery is our tribute to them and the terrific airplanes that they helped build.

I hope you will join us in celebrating a century of achievements by The Boeing Company.