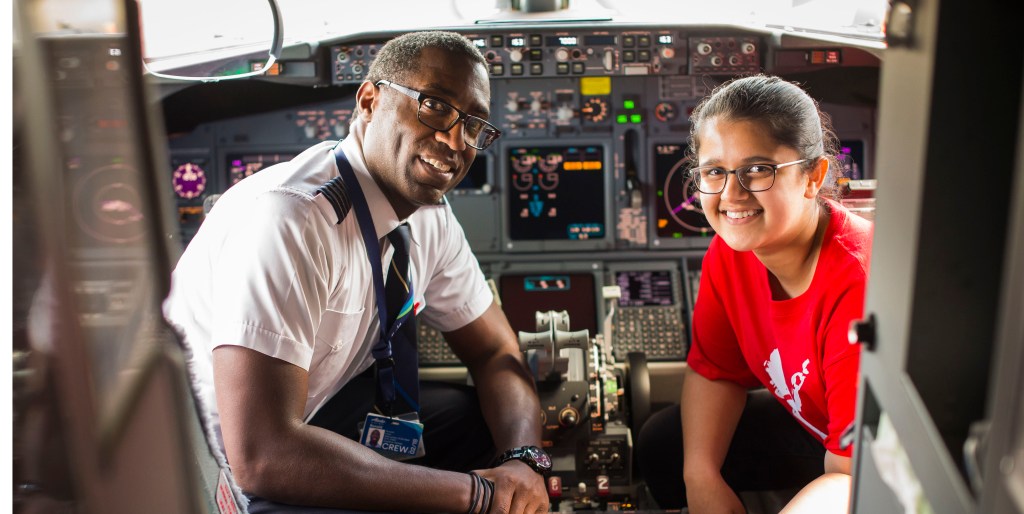 It found that spark when Kaur’s older brother talked her into joining the Michael P. Anderson Memorial Aerospace program. The program exposed her to a world of aviation and aerospace careers, introduced her to her mentor, Alaska Airlines Captain Ron Limes, and connected her with online aviation projects, Museum of Flight programs and Alaska Airlines Aviation Day.

To many people, pursuing a career in aviation is daunting. Myths abound that it’s a career you need to have your heart set on since grade school to get started; that you need years of pilot lessons, schooling and, most likely, military service just to get a foot in the door. In Limes’ case, all of the above was true. He began dreaming of a job in aviation in fifth grade – his teacher was a private pilot who would come to class with stories of weekend adventures. From there, he attended Embry Riddle Aeronautical University before spending 26 years in the U.S. Air Force. But Limes wants to show students like Kaur that his path isn’t the only way to earn a seat on the flight deck.

“Initially I was really into robotics and building things, and then by being a part of the program, I got interested in aerospace engineering,” said Kaur, a high school freshman. “Now through working with Ron and doing ground school and trying out flight simulators, I’m really excited about becoming a pilot.”

Aviation needs more Hamreet Kaurs. A lot more. Half of the current pilots at major U.S. airlines will reach age 65, the mandatory retirement age, by 2026. Boeing predicts in the next 20 years the industry will need 112,000 new commercial airline pilots in North America. Additionally, women make up about six percent of commercial pilots according to the FAA. Alaska Airlines and Horizon Air are pushing hard to help more young women like Kaur find their aviation spark.

A grassroots group of passionate Alaska Airlines employees created Aviation Day to open the door to careers for students like Kaur. Held in the Alaska Airlines Hangar at SeaTac, the event is something like a job fair, air show and a tour of Willy Wonka’s chocolate factory all rolled into one.

This year marks the ninth year of Alaska’s Aviation Day in Seattle and Portland. In Seattle, more than 1,200 students checked out aircraft ranging from an Alaska Airlines 737 to a U.S. Navy EF-18 Growler, tested out their maintenance skills with Alaska Airlines mechanics, practiced preflight checks with pilots, discussed aircraft design with Boeing engineers, and explored rocketry with Blue Origin.

The real show stopper for Kaur was the flight simulator, where she had a chance take off, cruise the clouds and then land (or… try to land—that’s the tricky part) an Alaska Airlines 737. This is the closest Kaur will get to flying until she can enroll in flight lessons when she turns 16 next year.

In Limes’ opinion, Aviation Day is exactly what the industry needs.

“Our goal is to trick kids into learning,” he says. “We make it engaging. Make it hands on. We want students to have fun and only realize later that they learned about orbits or the four forces of flight.”

“The future of aviation depends on making paths to careers as pilots, mechanics, and aeronautical engineers accessible,” Cassino says. “So much work in aviation is behind the scenes. And even for kids who are passionate about the wild blue yonder, it’s hard to know where to start. Aviation Day shows thousands of kids a side of aviation they’ve never seen before and gives them a path to follow from high school through college and into the field.”

Along with Alaska’s interactive exhibits, students at Aviation Day can connect with programs such as TeenFlight Puyallup, where teens build and fly an aircraft and learn about higher education opportunities nationwide.

To Kaur, events like Aviation Day and working with Limes make the dream of aviation tangible.

“After meeting Ron a couple times, he asked me if I had a spark,” Kaur said, recalling the first time her mentor asked her if she wanted to pursue aviation as a career. “At first I wasn’t sure, but he asked me again a few weeks ago and… yeah! I have a spark now.”

Kaur’s career as a pilot has a long way to go before she can take flight. Flying lessons, an FAA-approved four-year degree in aviation, and about 1,000 hours of flight time stand between her and telling a plane-load of passengers, “this is your pilot speaking.” But thanks to mentors like Limes and the 350 Alaska Airlines employee volunteers making Aviation Day happen, the future of flight looks brighter and more accessible to kids from all walks of life than ever before.

High school-age students interested in registering for Aviation Day in Seattle next year or for the May 20 event in Portland can learn more at http://alaskaair-aviationday.org.