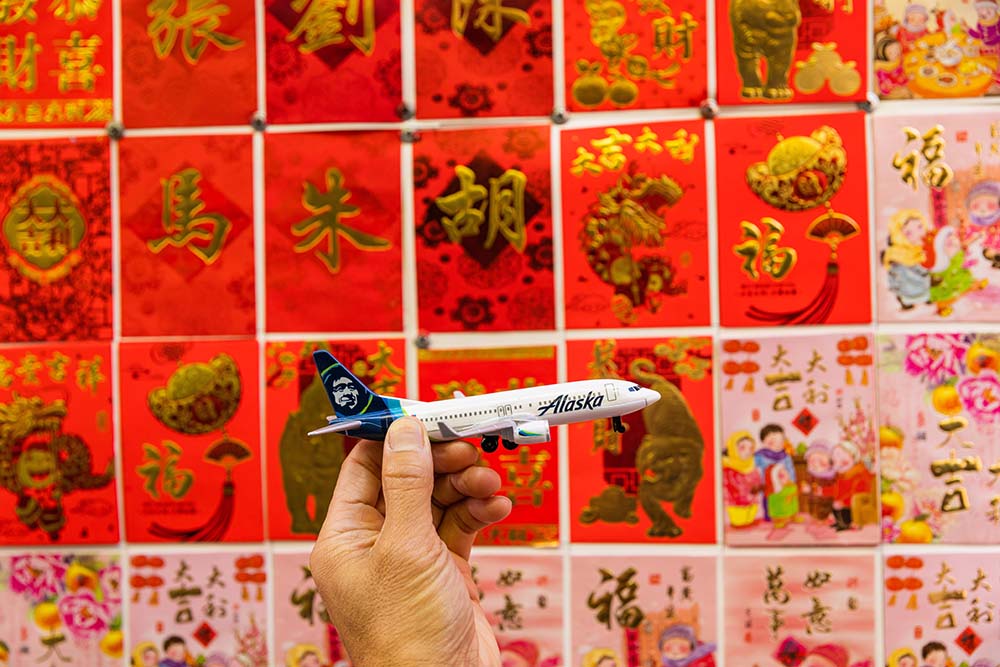 Alaska Airlines and the Chinese Chamber of Commerce of San Francisco are excited to welcome the Year of the Tiger with its annual parade celebration on February 19, 2022.

Happy Lunar New Year! As the title sponsor of this year’s San Francisco Chinese New Year Festival and Parade, we are honored to join all our friends for this beloved celebration and send our best wishes for a happy and prosperous Year of the Tiger!

The resilience, character and strong traditions of the Asian American Community in the Bay Area are an inspiration. To mark the start of Lunar New Year, Alaska is proud to share the stories of some of our Asian employees—stories about connecting with their roots, about overcoming hate and learning to unapologetically be who you are no matter what.

When we know about each other, we’re better together.

Many Asian Americans and allies hope the Year of the  Tiger will resemble more resilience than ever.

“The year of the  Tiger means prosperity and strength to me,” says Angel Li, duty manager for Alaska Airlines at San Francisco Airport. “As the Tiger is always looked (upon) as a guardian and a protector.”

“I want everyone who’s been hurt the last couple of years to heal,” she said.

Throughout 2020, as the Covid-19 global pandemic spread, so  did hate crimes against Asian and Asian Americans. Among many other incidents, in early 2021, Asian communities across the U.S. were shook after multiple shootings in Atlanta targeted and killed several Asian American women. Shortly thereafter, many of the Asian American community at large surveyed said they felt scared of discrimination and violence. But others came to rise in solidarity with the community, with rallies and joint efforts, including Alaska who publicly stood against the hatred. As such, 2022 feels like a great reset, especially in the context and care of the Covid-19 Crisis—when many folks felt afraid and alone, unable to safely gather with family and friends.

“I now make this a time to truly connect with my family in China over video chat instead,” Li explains. “In a way, it has helped us all grow closer.”

And many are looking forward to celebrating again, while looking back at old traditions. Nicholas Mendiola, customer service agent at SFO, celebrates both Lunar and Solar New Years in the Chinese and Spanish traditions. His grandmother helped start the tradition of purging for the Lunar New Year: donating old items and cleaning the entire house.

Mendiola says she also made dumplings and noodles to symbolize luck and a long life. His grandmother and older aunties would distribute red envelopes with crispy bills. There was also the tradition of lighting firecrackers in the garage. With a kung fu teacher for a dad, Mendiola would sometimes perform lion head dance (choy cheng) blessings at San Francisco’s Chinese New Year parade. It’s a joyful memory.

“I love the sound of the drums and gongs,” he says. “Then after dinner, we would light off more fireworks. We loved it. So much fun!”

It’s about hope, over harassment. Family, over fear. Love, over languishing. It’s about warmth, over worry.   — Nick Mendiola

As for Li, she and her parents will continue their own Lunar New Year tradition: celebrating with a large steamed fish at home.

By Tim Horn, director of station operations at Alaska Airlines in SFO

Asian Americans in the U.S. are growing in numbers—and in resilience.

But crimes against Asian Americans also spiked, especially during the pandemic. In October 2021, the FBI reported hate crimes increased significantly, and anti-Asian hate crimes went up more than 73 percent in 2020. Additionally, The Center for the Study of Hate and Extremism at Cal State San Bernardino found a 164% increase in reports of anti-Asian hate crimes in the first quarter of 2021, compared with the same period last year—with a 140% change in San Francisco. It was a struggle, and heartbreaking for many to see and be wary of.

“While I didn’t face any violence or hostility to me personally, it was a period of high stress, frustration and anger knowing it was happening to others, and the fear that it could happen to me anytime,” said Tim Horn, director of station operations at Alaska Airlines in San Francisco.

This Lunar New Year represents so much more for many in the Bay area: courage, strength and boldness. There have been wins alongside the struggles, like raising diversity, equity and inclusion (DEI) awareness and funds, such as California dedicating $10 million towards the nonprofit Stop AAPI Hate.

“After this past year, Lunar New Year means an opportunity to turn the page and make adjustments and new commitments toward my goal of living the best version of myself that I can,” Horn said.

Elmer Tosta, a customer service agent at SFO, is eager to celebrate—privately and publicly—with festivities, fireworks and food. He hopes the new year will be kind.

“Hope and optimism are what I’m thinking about as we approach this new Lunar Year,” he said. “This isn’t limited to thoughts about the pandemic possibly being behind us, but also about prosperity, health, and good fortune for our families, neighbors, communities, and workplaces.”

Horn hopes we can all turn a new leaf together, as the 2022 Alaska Airlines Chinese New Year Parade float, complete with marching bands, fighting lion and dragon dances and more, comes through the city. The return of the float is a thoughtful symbol of revival.

“The float also makes me proud to work for a company that makes such a bold commitment in one of its hub cities,” Tosta said of San Francisco’s 35 percent Asian American population. “Alaska’s contribution says a lot about their strong support for diverse cultures through this public display.”

Equity and inclusion remain top of mind. Meantime, there will be many additional events in Chinatown and SF. And, Horn will be helping his own team learn more about Lunar New Year in several ways, from communications to visual displays and savory delights—using his knowledge for good.

“And of course, through yummy potlucks that delight our taste buds and also educate us on ethnic foods,” he added.