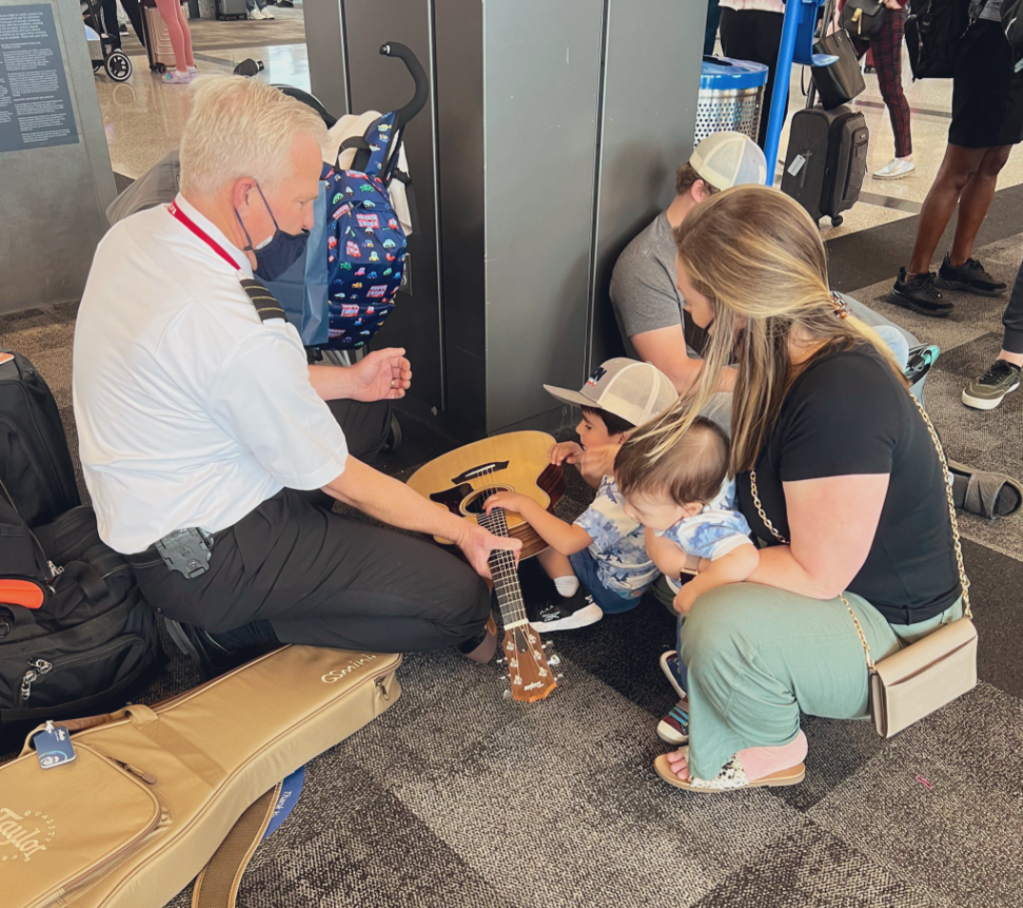 During long stretches at work, Buddy, an Alaska Airlines First Officer, will bring his acoustic guitar as his trusted travel companion.

“Music is a big thing for me,” said Buddy, who has played the guitar for over 20 years. “I think that everybody should have their own soundtrack going on in their mind all the time.”

Little did the San Francisco-based pilot know his musical gift would bring joy to guests on his next flight.

Earlier this month, while Buddy was flying from Austin to Seattle, the flight was delayed. Luckily, Buddy and his instrument were at the “right place, right time.”

“I was standing close to the gate and noticed one of our guests with two small children,” said Buddy. “The mother looked at me and said, ‘So, are you going to serenade us while we’re waiting?’”

Without hesitation, he pulled out his guitar to play for the kiddos.

“I got down on the ground right there with the little kids,” he said. “I started playing for one of the boys at first because he was all over the place and I was just trying to help distract him for a little bit.”

“We were delayed, which wasn’t the greatest news for parents traveling with a three-year-old and a one-year-old,” said Seattle resident and KING5 Reporter Steve Soliz. It was his wife who had jokingly asked Buddy whether “a serenade came with the price of a ticket.”

Other parents, whose children had also grown restless while waiting at the gate, gratefully watched as their kids were intrigued by the simple melody that suddenly filled the air. At one point, about a half dozen children surrounded Buddy.

“Buddy even let my toddler touch his guitar,” he said. “My three-year-old son and I walked up on the impromptu concert. Buddy happily played for my little ones and the others near the gate, who also enjoyed this musical moment. To be honest, this is one of the many reasons we enjoy flying Alaska.”

The pilot, who was concerned about being too loud and bothering the guests waiting at the gate, had no idea the group of kids weren’t the only ones paying attention to him.

I felt proud to work for a company who has employees that care, and Buddy needs this recognition,” Elisa said. “Buddy created a genuine connection that is off-script to what our job demands.”

Buddy was surprised to learn his small gesture had such a big impact.

“Every now and then you can do something that just seems so little to you that actually becomes a big deal to somebody else,” said Buddy. “If I can inspire anybody to do something, it would be — to be nice to other people. I think we all have the ability to do that.”

This past year, we’ve established new programs to enable more young people to reach aviation and other career goals, working with local schools and establishing our own pilot academies.

As we plan for Alaska and Horizon’s future, we’re actively working to train the next generation of pilots through a variety of programs. In March 2022, we launched the Ascend Pilot Academy in partnership with Hillsboro Aero Academy, a premier flight school in the Pacific Northwest. The Ascend Pilot Academy provides aspiring airline pilots with a streamlined, more financially accessible path to becoming a commercial pilot at Horizon and eventually Alaska. At launch, 180 prospective pilots signed up for the program—more than double our goal!

For Horizon Air pilots seeking to become pilots for Alaska Airlines, the Pilot Pathways Program provides the most direct route. Horizon Air and Alaska Airlines share a goal of creating a rewarding career at the Air Group family of airlines and making the move from regional to a major airline, if desired, as simple as possible.

Each year, a minimum of 30% of Alaska new-hire pilots will come from the Alaska Pilot Pathways Program. In 2021, 32% (51 pilots total) of our overall pilot new hires at Alaska were Horizon transfers through the Pathways program.

Over the past year, a group of Black Alaska pilots got together to find creative ways to make aviation careers more attainable for aspiring pilots.

Led by Ron Limes, an Alaska captain since 1999, the group worked in partnership with their colleagues, peers and leaders from across our company to develop a program called True North.

The program will increase the diversity of our industry by directly funding students’ flight instruction, providing internship and mentorship opportunities and ultimately moving graduates to first officer positions at Horizon Air, with a confirmed path to Alaska.

The program kicked off in 2021 with four students from two Historically Black Colleges and Universities (HBCUs), Delaware State University and University of Maryland-Eastern Shore. In the future, we plan to expand the program to other schools as well as broaden its scope of career opportunities within Alaska.