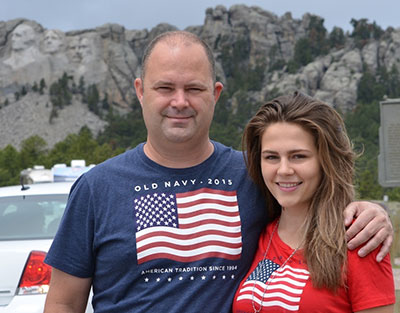 Brian returned from his deployment to surprise his daughter on a flight.

Airline employees witness emotional reunions all of the time – that’s what happens when your business is bringing people together from long distances. But it’s not that often that we get to help behind the scenes to plan and facilitate such a reunion.

Last month, Alaska Airlines was contacted by a woman named Aimee from Ketchikan, Alaska. Aimee’s husband, Brian, was returning from a U.S. Coast Guard deployment in Saudi Arabia, and Aimee had arranged for him to be on the same Seattle-Ketchikan flight as her daughter, Rachel, who was coming home for the holidays after her first semester away at Western Washington University in Bellingham, Washington.

Rachel had no idea her father, who she had not seen since last May, would be on the flight. Aimee was hoping the reunion would be a total surprise – something that would require several Alaska Airlines employees to pull off.

(The family asked that we not use their last name in this story because of Brian’s active military service.)

Customer Care agent Mary Wylie saw an opportunity to “be remarkable” and was happy to do her part. She worked with Seattle reservations agent Bruce Vignal to arrange for them to sit together and then relayed the request for secrecy to flight attendant supervisors.

“She was crying happy tears on the phone with me. I was hoping it was going to be something very special!” Wylie said.

Flight attendant supervisors Patty Baerg and DJ Brooks then took the baton and coordinated on their end. On the day of the flight, Baerg went to the airport to facilitate the reunion. Concierges at the Alaska Lounge at Sea-Tac agreed to harbor Brian so his daughter would not see him in the waiting area.

“We waited for her to board first and then escorted her dad to the plane,” Baerg said. “We then called Rachel up to the galley ‘to sign a paper’ and that is when she saw him. She was totally surprised and delighted.”

Upon spotting him, Rachel grabbed her father, and the two embraced for several long moments, him laughing and her sobbing with joy. Baerg captured the whole scene on video so that mom Aimee would later get to witness the joyful embrace.

The pilot announced the reunion to the rest of the guests and they all applauded as the giddy father and daughter took their seats together so they could catch up on the flight home.

Aimee said she was hopeful that the unexpected reunion could be arranged, but wasn’t sure a bunch of strangers would be willing and able to pull it off.

“Thanks to you all at Alaska Airlines, we got it on film and were able to keep the surprise hidden,” she said.

Apparently, that was just the first delightful discovery of the weekend for the family. Aimee had also kept Brian’s homecoming a surprise from her other two children – Sam, 16, and Ben, 5, and her mother, who is living with them.

The family spent time over the holidays reconnecting, enjoying their time together and exploring the beautiful Southeast Alaska hiking trails before Brian had to return to Saudi Arabia.