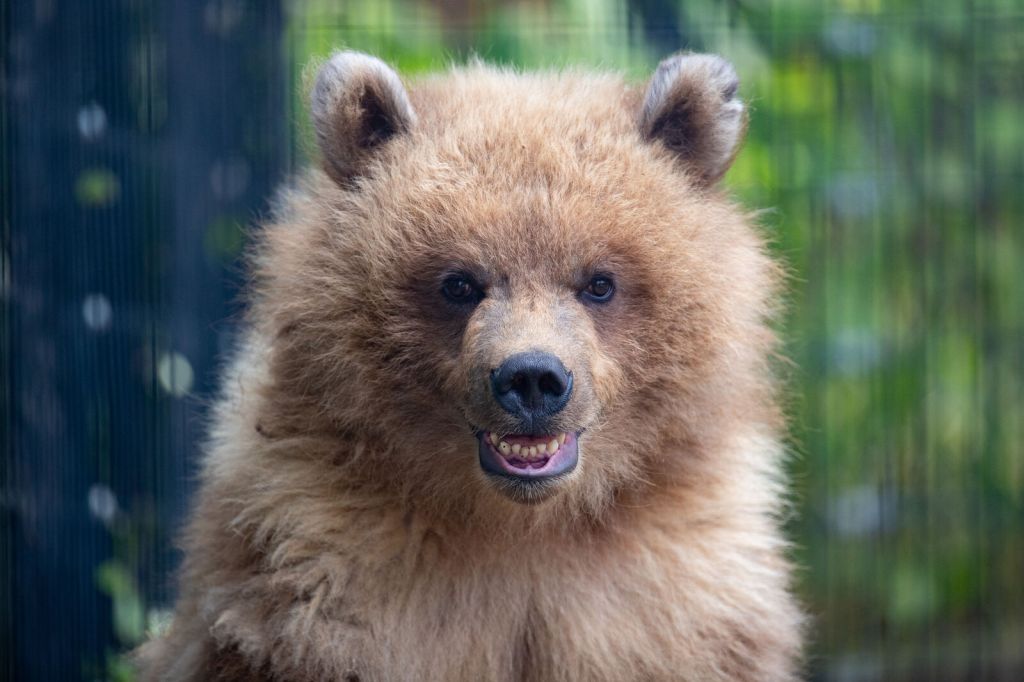 An orphaned brown bear cub found wandering alone on a military base outside Anchorage is settling in at Seattle’s Woodland Park Zoo after flying to her new home in the special care of Alaska Air Cargo.

Alaska Department of Fish and Game officials observed the cub earlier this year on Joint Base Elmendorf-Richardson and took her to the Alaska Zoo when they determined she didn’t have a mother bear to look after her. Orphaned cubs can’t survive alone in the wild, and Woodland Park Zoo was eager to offer its Living Northwest Trail habitat to a cub in need of a permanent home.

“It’s unfortunate when a wild cub loses its mother and becomes an orphan, especially because the cub learns so much about how to be a bear directly from its mother,” says Kevin Murphy, interim senior director of animal management at Woodland Park Zoo. “We are grateful that we are in a position to take in another brown bear at this time and have the expertise and facility to do so.”

The 89-pound cub flew to Seattle from Anchorage in mid-July and is now busy getting to know her new digs. “She’s growing like a weed and exploring with her exquisite sense of smell,” Murphy says. The zoo’s staff is using strategies like tucking food into rotted logs to teach the cub crucial bear skills like foraging. “She’s a wild bear and we want her to be resilient and engaged with her environment on every level,” Murphy says.

Every year tens of thousands of live animals travel via Alaska Air Cargo’s Pet Connect service – mostly beloved dogs and cats joining their human families. But when the rare bear is booked for travel, the cargo teams and the zoos and wildlife agencies involved work together closely to choreograph the journey to ensure the cub’s safety and comfort each step of the way.

Our team is so experienced moving animals of all kinds, and we just love it,” says Jeff Munro, cargo operations manager for Anchorage (ANC). His airport regularly shepherds wild animals bound for zoos, wildlife rehabilitation centers or back to remote areas of Alaska once they’ve been rehabilitated. “Whether it’s a bear or a moose or a seal or a puppy, we follow our Pet Connect processes and focus on really taking great care of them,” he says.

For this cub’s journey, the cargo team coordinated a travel plan with the zoos in both Anchorage and Seattle. Before the flight, the zoos confirmed the size and weight of the cub’s crate so the cargo team could ensure the kennel would fit in the belly of the aircraft, and the Cargo Network Support team reserved space for the bear, blocking other animal bookings from the same flight. “It’s prudent to keep other animals off that flight, both for the bear and other animals like dogs who might be upset by smelling a wild bear next to them,” Munro says.

When the cub arrived for her flight, Munro’s team made sure her crate was secluded away from the cargo station bustle as much as possible. The Cargo Network Support team monitored the timely departure and arrival of the flight, and if the flight had been delayed, they were poised to work quickly with the two zoos to coordinate a new flight plan for the cub.

Like all of our live animal travelers, the cub received the highest-priority loading – last on in Anchorage and first off in Seattle – and when she arrived, the Woodland Park Zoo team was ready and waiting to scoop up their newest resident. “She was calm when we picked her up,” says Murphy, who notes that a small crate can feel like a safe space to a young cub in transit.

Woodland Park Zoo ships around 250 animals each year via air freight and chooses to work with Alaska Air Cargo whenever possible because of our team’s attention to customer service and the animals’ needs. “This process was seamless, and when there are no hiccups on the human side, it reduces stress for the animals, too,” Murphy says. “Alaska Air Cargo and Alaska Airlines really show that they care about the animals.”

The as-yet-unnamed cub still must pass her 30-day quarantine (standard procedure at Woodland Park Zoo) and learn her new environment before visitors to the zoo can meet her, but Murphy is excited to share the cub with the Seattle community. “Brown bears are an iconic species, and this new cub is a symbol of hope to restore grizzlies in the North Cascades,” Murphy says, explaining that all grizzly bears are brown bears, but not all brown bears are grizzlies. This cub is a coastal brown bear – a bit larger than a grizzly – and she will grow to around 500 pounds. “Her role is as an ambassador, and we hope that when people see her and care about her, they will also care more about bears in the wild and preserving their habitat.”