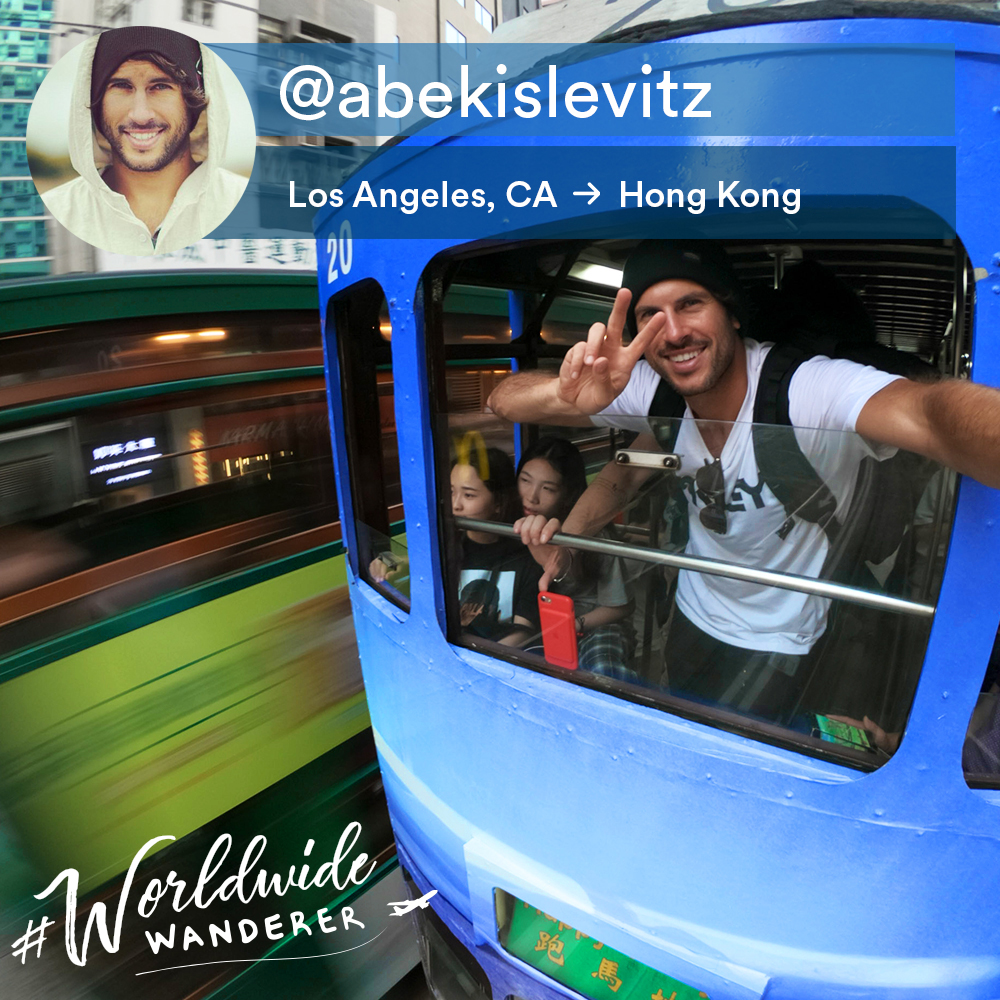 Alaska Airlines’ program to send people to cool places around the world, the #WorldwideWanderer, gave me and my best friend Caleb Farro the opportunity to explore Hong Kong for the first time. No, Alaska Airlines doesn’t fly to Hong Kong, but Alaska Global Partner Cathay Pacific does! I always heard great things about this city but never had the chance to go until now. We spent a full six days in the heart of the city, adventuring to as many spots as we could.

Cathay Pacific makes flying from the West Coast a breeze. The direct flight from LAX is 14 hours straight into Hong Kong, and only 12 on the way back! You’ll be treated to the newest International Terminal at LAX, followed by a comfortable flight that’ll have you well rested and ready for the organized chaos that lies ahead.

From the airport there’s an express train that immediately puts you into the web of public transportation in downtown that you’ll become familiar with after a day or two. The subway system (MTR) gets you within steps of pretty much anywhere you need to go. I highly recommend grabbing an Octopus card as soon as you get in – this is a pre-loaded tap card for the subways. You can pick it up at any station from the customer service desks. Hold onto it because you pay a deposit that you’ll get back when you leave. You can also use the Octopus card to buy things at 7-Eleven, which is on every street corner!

We got an AirBNB in the heart of the city in the area called Mong Kok. It’s more of a local’s zone with tons of shopping and bustling markets. We stayed on the top floor of a 26-floor building in a little apartment. Hong Kong’s population density is of the highest in the world so keep an eye out when you’re booking AirBNBs, some can be pretty tiny. Ours was around $130/night and slept four people. It had two balconies and a bunch of windows which made it perfect for capturing photos of the city at all hours. 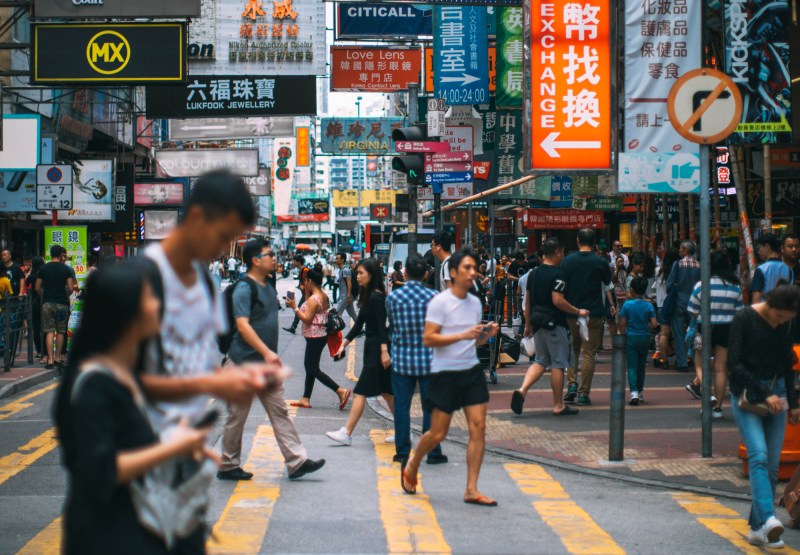 Our first night we headed up to the top of Victoria Peak to get a sense of place and scale of the city. Hong Kong is broken up into two major halves – there’s the mainland side or sometimes referred to as the Kowloon side, and then the Island side which is where Victoria Peak is. A little hint for the peak – there’s a tram that goes straight up the mountain-side – which can be a great activity if you have a lot of time, but the line can get quite long. We just hopped in a taxi at the bottom which took us to the same place if you’re just looking for the views. If you go around sunset, stay until just after 8 p.m. – every night Hong Kong puts on a laser/light show that lasts 20 minutes and incorporates a bunch of buildings on both sides of the city. 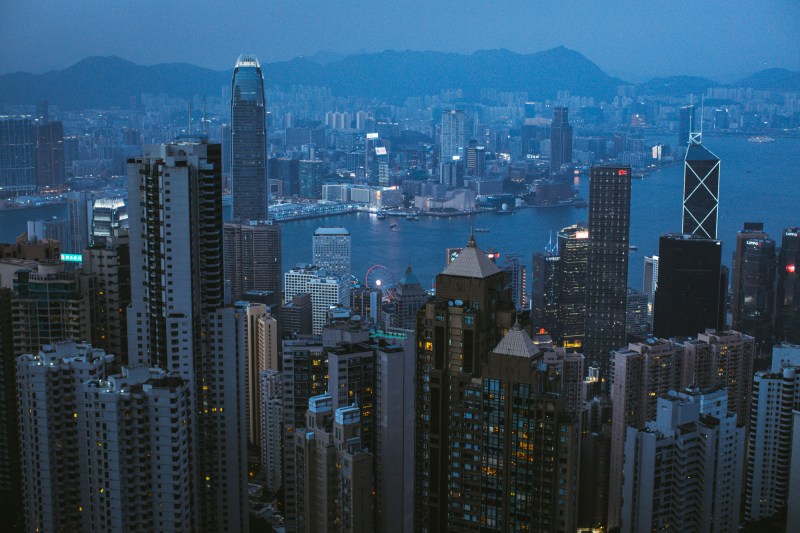 We sampled as much food as we possibly could. Our favorite spots were the famous Dim Sum locales featuring pork buns, dumplings, and everything in between. There’s a chain of spots called Tim Ho Wan, one of which is located right in the Central station. It’s a Michelin-starred restaurant, and it tastes like it! They know how to get people in and out too – you hand them your order when you sit down, and you’ll be eating within seconds. I highly recommend the baked pork bun as the go-to item here.

Pro tip: If you’re just passing through the station, just get a couple buns to-go, then you don’t have to wait in line! Another one of our favorites was getting milk tea on the street. There are tons of vendors everywhere, just explore! 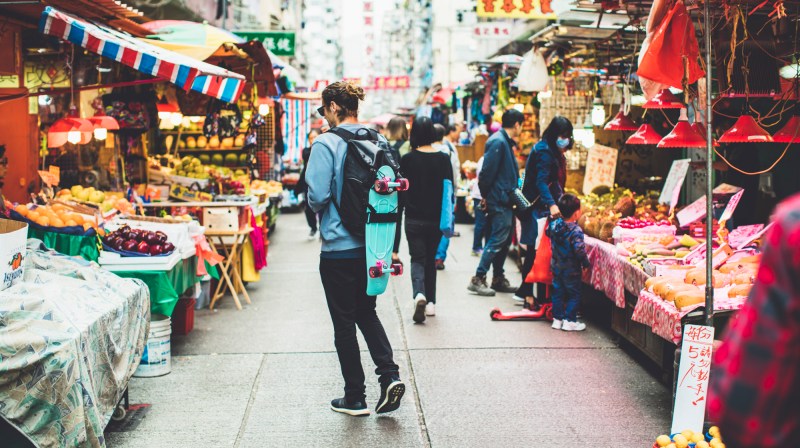 Hong Kong is a vibrant city full of buildings splashed in amazing color. We got a list of must-see places from friends and plotted it out all on a map for a single day. The MTR system was easy enough that we just rode it in one giant circle all the way around the city. These spots are no secret, you’ll definitely see tons of other like-minded photographers looking to snag the shot. We went to a couple of the famous ones, and they didn’t disappoint! 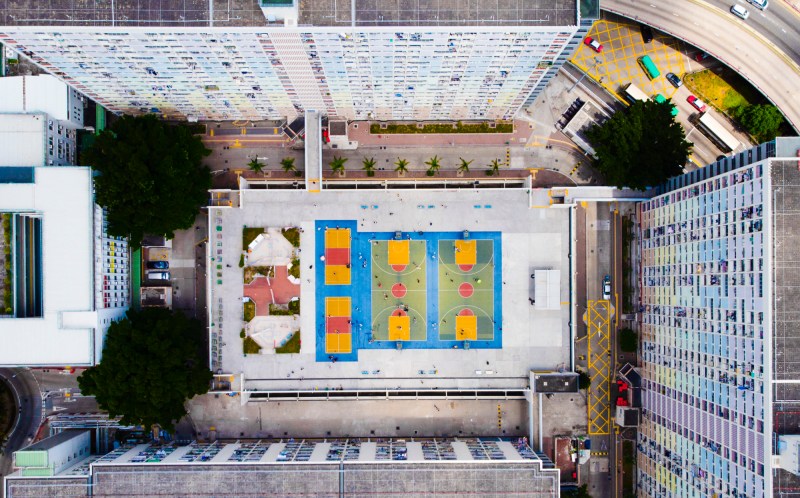 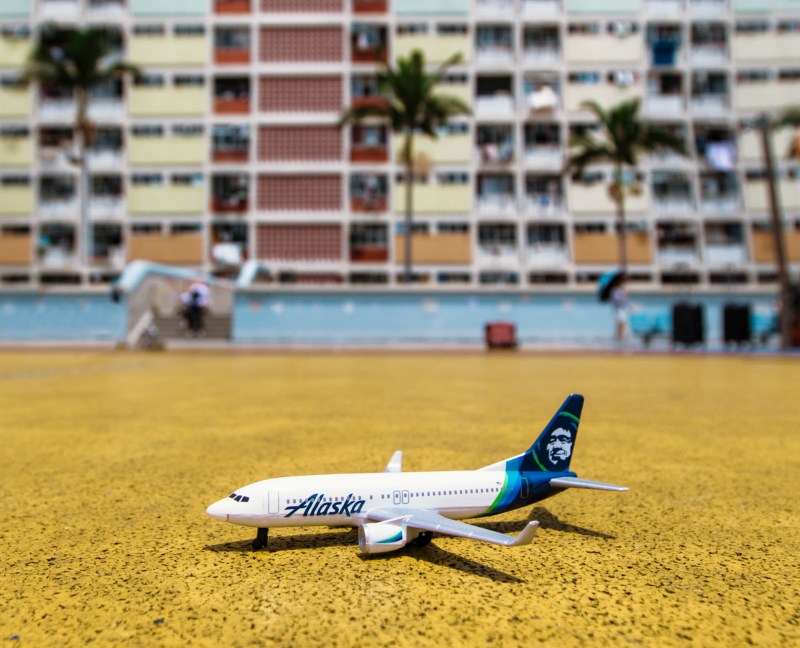 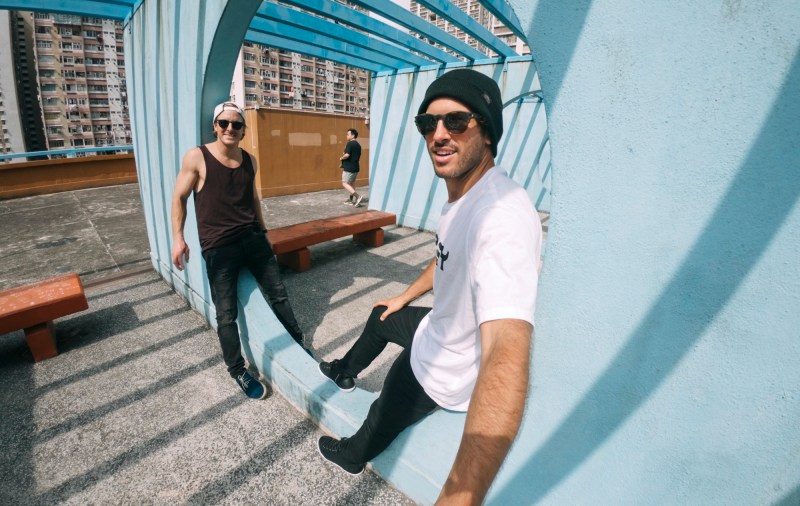 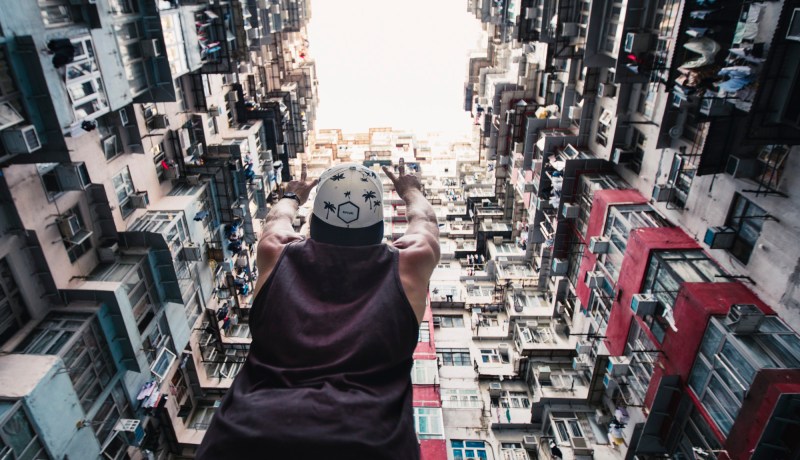 Getting out of the City

There are tons of amazing spots right out of the city that’ll make you forget you were ever in one of the world’s most populated cities. We had a spot we wanted to shoot that we found about an hour north east of the city. There was a way to take a train to a bus, but we just decided to hop in a taxi. From downtown we took our first taxi to the center of Sai Kung, a little coastal town, and then swapped into a local taxi to go the rest of the way. Taxis are affordable and everywhere because most people living in HK don’t own cars. I highly recommend getting out to see the zones just outside of the city because you’ll experience the jungle vibe and see all the amazing island formations that surround the area. 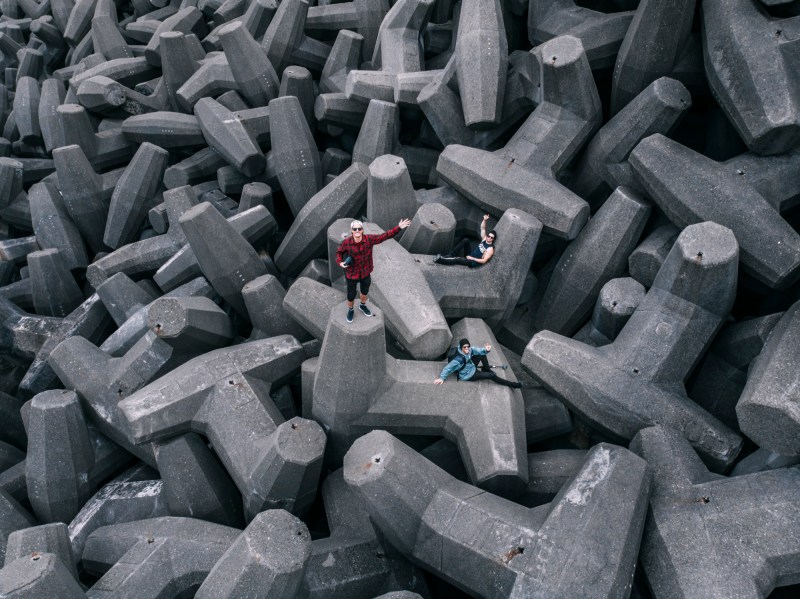 Visible from just about everywhere is the International Commerce Center building right on the shores of the Kowloon side of Hong Kong. It’s the tallest building in Hong Kong, and the 8th tallest in the world. Perched in the top 20-or-so floors is the Ritz Carlton Hong Kong, featuring a bunch of high-rated restaurants and a bar at the very top claiming to be the highest bar in the world. We came up here for sunset one evening and to snap some photos of the city. It’s a sweet ambiance, and a rather fun spot to explore. 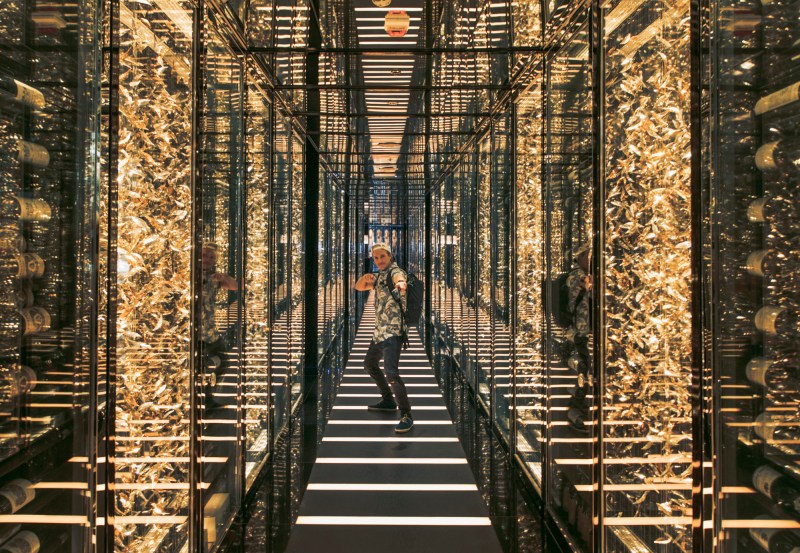 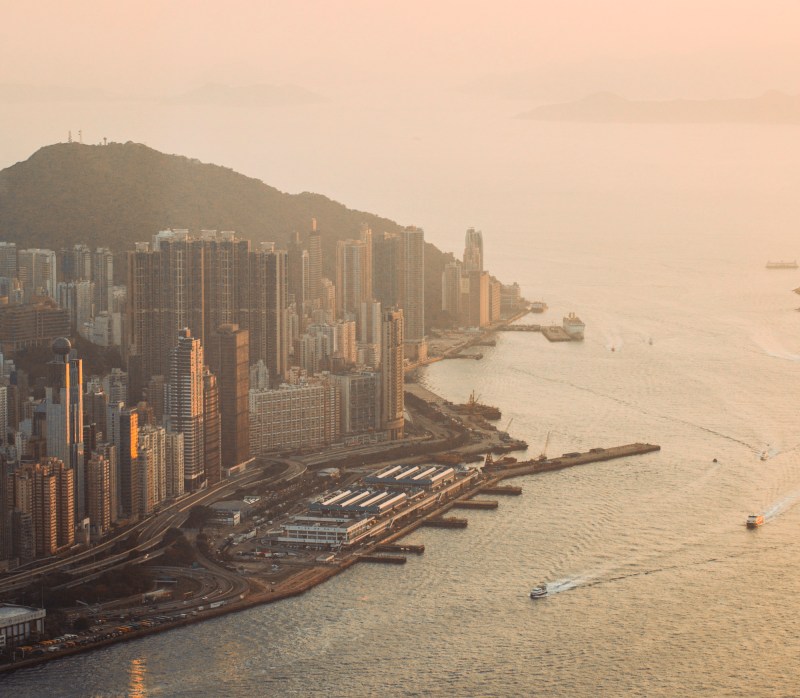 One of the biggest sporting events in Hong Kong was taking place during our stay, the Hong Kong Sevens – a rugby tournament! We were able to find tickets from some international friends we met in the city. The Sevens draws a ton of visitors from Australia, South Africa, and Europe. It’s a three-day affair, with matches taking place from morning to night each day. Afterward, the whole crowd seems to migrate a couple subway stops down the street to the party zone of Lan Kwai Fong (LKF for short). This is a hot spot of bars, clubs, and late-night fun. 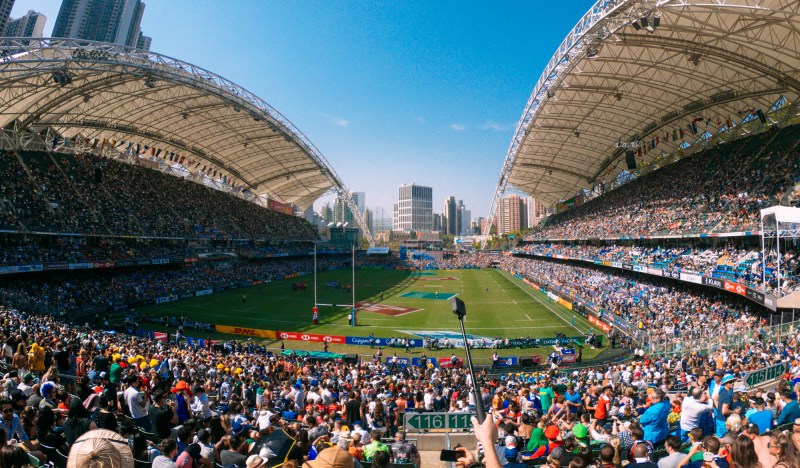 As we were departing we felt like locals in the city – Hong Kong was by-far one of the easiest places to feel at home, even all the while feeling so different from anything else I’ve experienced. We never felt any sense of risk, always knew where we were and how to get home, and were genuinely happy to be there! I’d definitely love to go back and bring a big crew of friends. There’s so much to explore on every street corner, you could get lost just wandering around and discovering new and exciting things everyday.

Sincerest thanks to Alaska Airlines and Cathay Pacific for having us along this awesome journey!

No experience is too extreme for returning Wanderer, Abe Kislevitz, and his GoPro-style adventures. With everything from underwater explorations to reaching the highest mountain peaks, Abe is ready to take on the world. He just returned from a global Instagram takeover in Hong Kong with Alaska Global Partner Cathay Pacific. For more Wanderer posts to inspire your wanderlust, be sure to follow Alaska Airlines on Instagram.