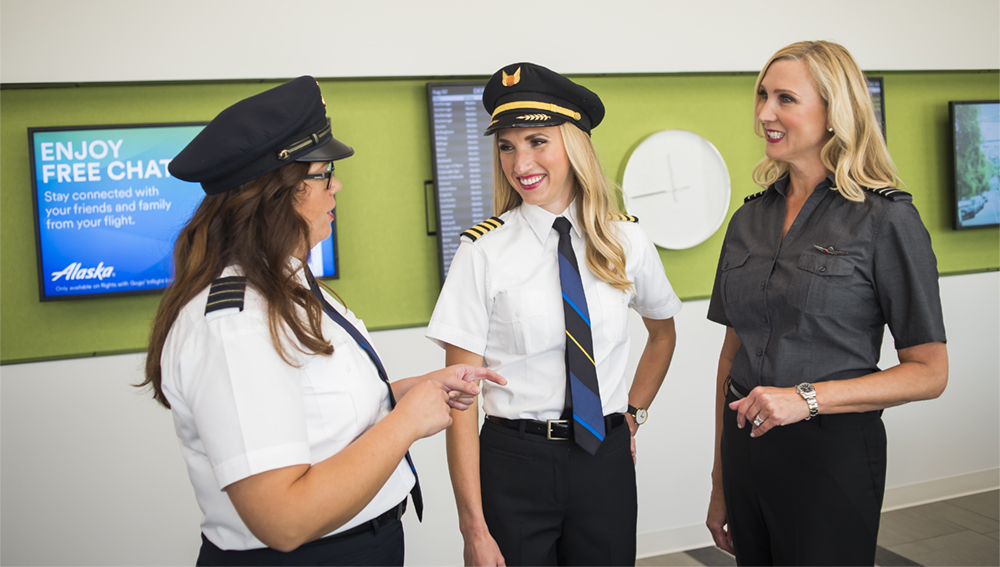 Good pilots are known for their technical expertise, precision, teamwork and customer service. At Alaska Air Group, pilots go beyond that to also exemplify the company’s core values: Own safety, do the right thing, be kindhearted, deliver performance and be remarkable.

These professionals have a deep and unwavering commitment to outstanding flying skills. They take seriously their command responsibility and authority.

At the same time, they know they’re not just flying planes, they’re flying people. That mindset informs everything they do.

Women in the flight deck remain somewhat of a rarity: Only about 5 percent of commercial airline pilots in the U.S. are women. Among the three pilots profiled here, there is a certain sense of camaraderie. But above all, they’re professional pilots doing what they love – flying our guests.

One of the flights that Captain Kimberly Gabrelcik treasures most happened three years ago. Six of the original Bay Area “Rosie the Riveters” were being honored at the White House for their work in the shipyards in support of World War II, and Gabrelcik captained their flight to Washington, D.C.

“These women are so inspirational. They’re sharp, witty, strong and involved in their communities,” says Gabrelcik, who now regularly has lunch with the Rosies. “They shaped the course of history and showed that women could do anything.”

For Gabrelcik, that has meant piloting a commercial jet for Virgin America. When she was growing up near Sea-Tac Airport, she says, “A number of our neighbors were pilots, but it never dawned on me that it was a job I could pursue as a woman.”

One evening at a dinner party, Gabrelcik met a woman who was a pilot. The two spent just 10 minutes talking, but Gabrelcik had an epiphany: “Wow! This was something I could actually do.”

The next day, she began plotting her career in aviation.

Flying is a passion that Gabrelcik enjoys sharing with others, as well. She coordinates fundraisers and hospital visits for Pilots for Kids in San Francisco, where she’s based.

Gabrelcik also likes to bring kids into the flight deck before a flight, noting that it’s also important for parents to witness that experience and recognize the possibilities for their child as part of the next generation of aviators.

That little piece of inspiration, she says, can go a long way.

Alaska Airlines First Officer Chazmin “Chaz” Peters now directs the camp that she attended as a kid – a camp that gave her career direction. She stands at the front of a class at Eagles Aviation Camp, a program in Seattle that helps middle school and high school students from populations underrepresented in aviation learn about the field. The camp was founded 22 years ago by Peters’ step-father, Millison Fambles, a 25-year Alaska pilot who still participates.

Peters knows that, as a member of the Squaxin Island Tribe of South Puget Sound, with a Native American father, an Asian-American mother and an African American step-father, she can be a role model for underrepresented groups.

After her early camp experiences, Peters decided to seriously consider being an airline pilot, a decision that gave her a reason to improve academically.

“I made a declaration that I was going to try hard and focus … and I did,” she says.

After eight years of flying with smaller airlines, Peters joined Alaska in 2014. Soon after, she was a First Officer on a flight captained by her step-father – a proud, defining moment for her entire family.

As Peters sees it, she is part of a larger community of Alaska pilots and other employees doing good work. This is one of the reasons she was intent on working at the airline.

“Alaska cares about the community, our camps and a lot of other programs,” she said. “That matters to me.”

In May, she taught a seminar for Alaska’s Aviation Day, an annual event that aims to inspire Puget Sound-area kids. And she participates in events geared toward encouraging women in aviation.

She sees many possibilities for her own career, including working in Alaska’s training department.

“Eventually, I’d love to have a group of pilots who say, ‘She helped me get my job; she got me started in aviation.’”

On her office wall, Horizon Air Captain April Eriksson displays a quote that particularly resonates with her. It’s by Amelia Earhart: “The most effective way to do it, is to do it.”

“That quote shows the mentality that something might seem intimidating or challenging at first, but … just go ahead and do it,” she says.

As Horizon’s Seattle Base Chief Pilot, Eriksson manages more than 270 pilots. To help foster the next generation of pilots, she enjoys giving presentations at schools, connecting with college students at Women in Aviation events and representing the airline at community events.

Ali Donway, Director of Flight Standards for all of Horizon’s approximately 750 pilots, says Eriksson deftly juggles everything, from scheduling and regulatory compliance to mentoring pilots and working on special projects.

“No task is too big for her,” Donway says, adding that Eriksson cares about her colleagues in all positions at the airline. “She’s also a great personality, so if you’re in a flight deck with her, it’s going to be enjoyable.”

Eriksson says she loves flying: “I enjoy the challenge of flying in various conditions and environments, and the views in the Northwest are second to none in terms of an aviation career. There’s also something pretty special about knowing I’m flying 76 people to places they want to go, and it’s an honor to have them on my airplane.”

On an especially memorable flight, one of the passengers was celebrating her 100th birthday that day, and had never flown before. Flight attendants used their creativity to craft a pretend “birthday cake.” Eriksson made an announcement and gifted the centenarian with a set of pilot wings.

“She had tears of joy because of the treatment she got,” Eriksson said.

One of Eriksson’s favorite captain activities is inviting youngsters to see the flight deck before departure. In fact, getting to see flight decks as a child helped inspire her to be a pilot.

She was also inspired by a school report she did at age 8: She wrote about Amelia Earhart.