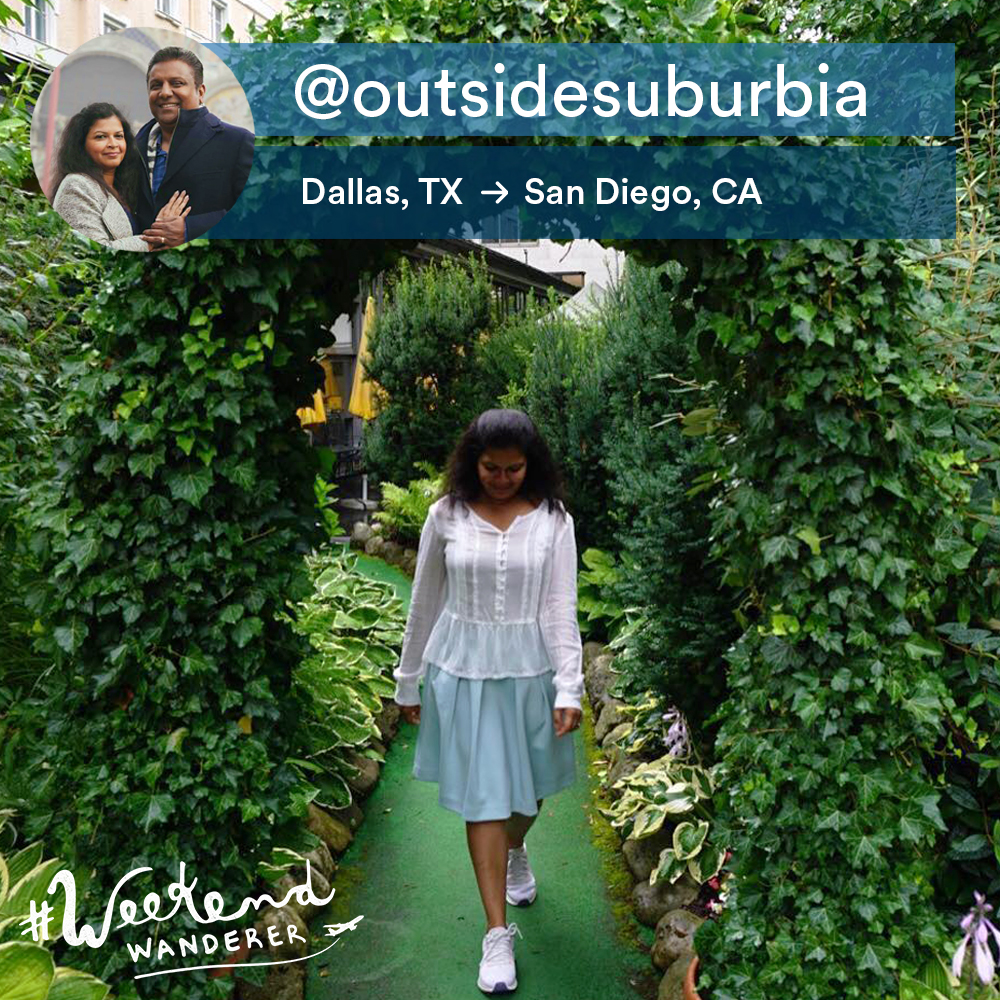 When Alaska Airlines asked us if we wanted to go Outside Suburbia and be a Weekend Wanderer in San Diego, we could not refuse – not just because we know life is a beach in San Diego, but also because we were hoping to see some spring blooms while we were there.

From Dallas Love Field, it’s a three-hour flight to sunny San Diego where the expected forecast was 70 degrees for the next few days. Perfect for exploring some of the 70 miles of coastline and more than two-dozen beaches with my husband an our son, D.

Ready to vacation in San Diego? Turn your dream into reality with these flight deals.

Checking in to The Hotel US Grant

We felt like royalty checking in at the US Grant in the lively Gaslamp area, part of the Luxury Collection this Hotel has hosted 15 U.S Presidents and 5 First ladies. There is a collection of photos that captures these visits throughout history, including Senator John F. Kennedy’s presidential campaign speech on the doorstep of the Hotel days before the election. Downstairs the Bivouac Ballroom used to be the Bivouac Grill which during prohibition was transformed into a popular Speakeasy and alcohol was smuggled in from Mexico through underground tunnels that carried saltwater from the nearby San Diego Bay to the hotel’s Turkish and Moroccan baths.

Our first stop was brunch in the Gaslamp Quarter in the heart of downtown San Diego. It’s full of historical buildings with brick facades, gas lamp street lights and bustling nightlife. You are spoiled with choices here, with 120-plus restaurants and shopping at boutiques and galleries long Fourth and Fifth avenues.

Our son D, the baseball fanatic, wanted to check out the Petco Park – home of the San Diego Padres. If there are no scheduled games you can still stop at the fan shop or opt for the in-depth tour through the ballpark and the dugouts. After buying a San Diego Padre’s pennant to add to his baseball collection, we took an Uber to Balboa Park.

Balboa Park is 100 years old and one of our first stops anytime we are in the fine city of San Diego. It is one of the largest urban parks at 1,200 acres, larger than even NYC’s Central Park. We love strolling through the Spanish styles buildings and gardens, visiting the many museums. Balboa Park is home to the famous San Diego Zoo, historical Old Globe theater, San Diego Museum of Art, Aircraft Museum, Natural History Museum among others and a picturesque Spanish Art Village. Since it was spring and we missed seeing the Cherry blossoms during our visit to Japans last December, we stopped at the Japanese Friendship garden to see if they were blooming. Not all the trees were on full bloom but still it was a pretty sight to see the pink blooms in the serene landscape dotted with rocks and bridges. You can stop at the adjacent Japanese Tea house or the many stores around for some refreshments. We saw a few families having a picnic and kids playing in the pretty structures.

Along the Embarcadero, historical vessels including the aircraft carrier USS Midway and the 1863 Star of India are floating museums. Around the corner near the parking lot is the 25-foot “Unconditional Surrender” statue the infamous embrace starring a sailor and a nurse is an iconic image of the end of World War II. The original image of the moment was captured by photographer Alfred Eisenstaedt on August 14, 1945. J. Seward Johnson is the sculptor of this version, though there has been some debate whether it is actually based on the famous photo. In any event, tourists and old veterans love it, assuming the same kissing pose with a loved one at its base, or just peeking up the nurse’s skirt.

Little Trivia : Glenn McDuffie, who claimed that he was the smooching sailor, died at age 86 on March 9, 2014. He is said to have spent the last several years of his life charging women $10 to take a picture of themselves kissing him on the cheek.

Road trip to the La Jolla and the North Coast

We rented a car for a day from TravCar in Little Italy and drove north, after a pit stop at La Jolla for lunch at our favorite George’s by the cove, stopping by to see the sea lions at the La Jolla cove and watching the Gliders at the Torrey Pines we drove to Carlsbad.

Since we were visiting during spring, we couldn’t pass up the opportunity to visit the blooming The Flower Fields in the North coast.

The tecolote ranunculus put on quite a show at this patch of hilly land along with roses gardens, orchids and other spring flowers. There is even a sweet pea maze and an American Flag thanks to strategically placed patches of pansies. We took a tractor ride to see the flowers up close – there were colors ranging from pinks oranges and yellow.

On the way back to return the car, we stopped to watch the sunset at the man-made Mission Bay – part of Mission Bay Park – where kayaks, jet skis, sailboats were enjoying the last light of the day in the calm backwaters along with hikers, joggers on the bayside paths. It was time to head home.

If you have some more time …

There is plenty to do in San Diego if have a few more days from world class golf, visiting LegoLand or Seaworld to visiting the San Diego Zoo Safari Park that makes you wonder if you are in Africa.

If you have time or rather make some time to take a ferry over to Coronado to experience the fine sand, the mica in the sand catches the sun’s rays and turn silver. You can stay at the historical Hotel Del Coronado or just stop by for a visit to stroll along the tree-lined boulevards and eat at one of the cafes in the quaint town center.

There is world class golf at some of the famous greens around the area like the Torrey Pines Golf course and Arnold Palmer signature course at the Park Hyatt Aviara.

You should visit the Old Town, it is called the Birthplace of California since the earliest settlers and explorers called it home. You can browse through the many stores here for colorful Mexican collectibles and enjoy some fresh tortillas in the one of the many restaurants that line San Diego Avenue.

3 places we ate and loved

There is no shortage of places to eat.

This farm to table spot in Gaslamp oozes Insta-glam. Located in Gaslamp it serves contemporary international food made from scratch, with fresh and organic ingredients. You will find delectable homemade bread sandwiches, fresh organic salads, decadent brunches and a huge assortment of organic coffees and complete line of craft cocktails. We started brunch here – mine was California Greenin’ Bloody Mary that came loaded with veggies and a grilled cheese skewer and a chocolate cake before heading to Petco Park and then over to Balboa Park.

This Bayfront Mexican Restaurant on Harbor Island features a massive waterfront dinning deck with a beautiful view of the San Diego Bay and the downtown skyline. You can watch the ferries make their way from Coronado and if you are lucky even catch some fireworks like we did. While I enjoyed my plantain taquitos, hubby had their ahi tuna toastadas and some freshly prepared fish. D had what looked like a giant portion of nachos with carneras. They have nice cocktail list with more than 100 tequilas and a dozen mescal infusions. I like the Mexican wine that our waitress suggested – a light and fruity rosé  – a grenache cursi from Valle de Gaudalupe.

Georges at the cove

This La Jolla landmark serves up California cuisine with some pretty amazing ocean views. We love coming here anytime we are we in the area, they have 3 different dining options – the terrace is our favorite. Get a couple of drinks at the bar and enjoy the view while you wait for your table. Hubby stuck to the favorite fish tacos and ceviche and I had their Impossible burger – I took a bite of the burger and saw the medium rare center had to call in the chef who assured me what I was served was indeed a plant based burger. We soaked in the views and enjoyed a warm chocolate cake that came with chocolate covered corn kernels and ice cream and coffee.

Our experience with Alaska Airlines 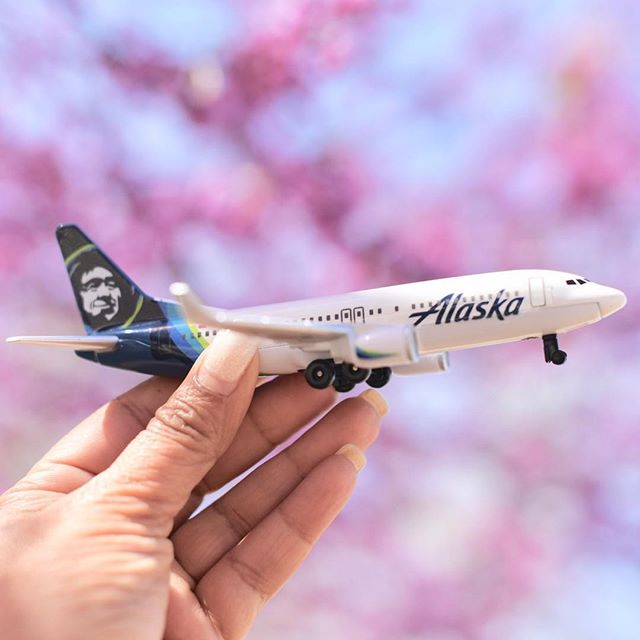 We have nothing but wonderful experiences with Alaska Airlines – from the staff at the ticketing counter or gate and inflight personnel.

Our First Class seats were roomy and comfortable, since we were catching an early flight back home – a warm breakfast was included. When I mentioned to my friendly flight attendant that I don’t eat meat, she brought me a fresh plate with just eggs and fruit, sans sausage.

If you download the Alaska Airline app before takeoff, you can watch movies or chat with friends on Facebook or Whatsapp using the free Wi-Fi. While the boys dozed off I was busy browsing through the Alaska Beyond Magazine trying to decide if we should go to Hawaii or visit Alaska next: Where would you go if you could be a #WeekendWanderer?

Ready to vacation in San Diego? Turn your dream into reality with these flight deals.

Travel writer and family expert extraordinaire Priya Ramachandran of Outside Suburbia uses school breaks to see the world with her husband and kids. Her travels have taken her all over the United States and beyond. She just returned from an Instagram takeover in San Diego, California as part of Alaska’s Weekend Wanderer series.  For more Weekend Wanderer posts, be sure to follow Alaska Airlines on Instagram.