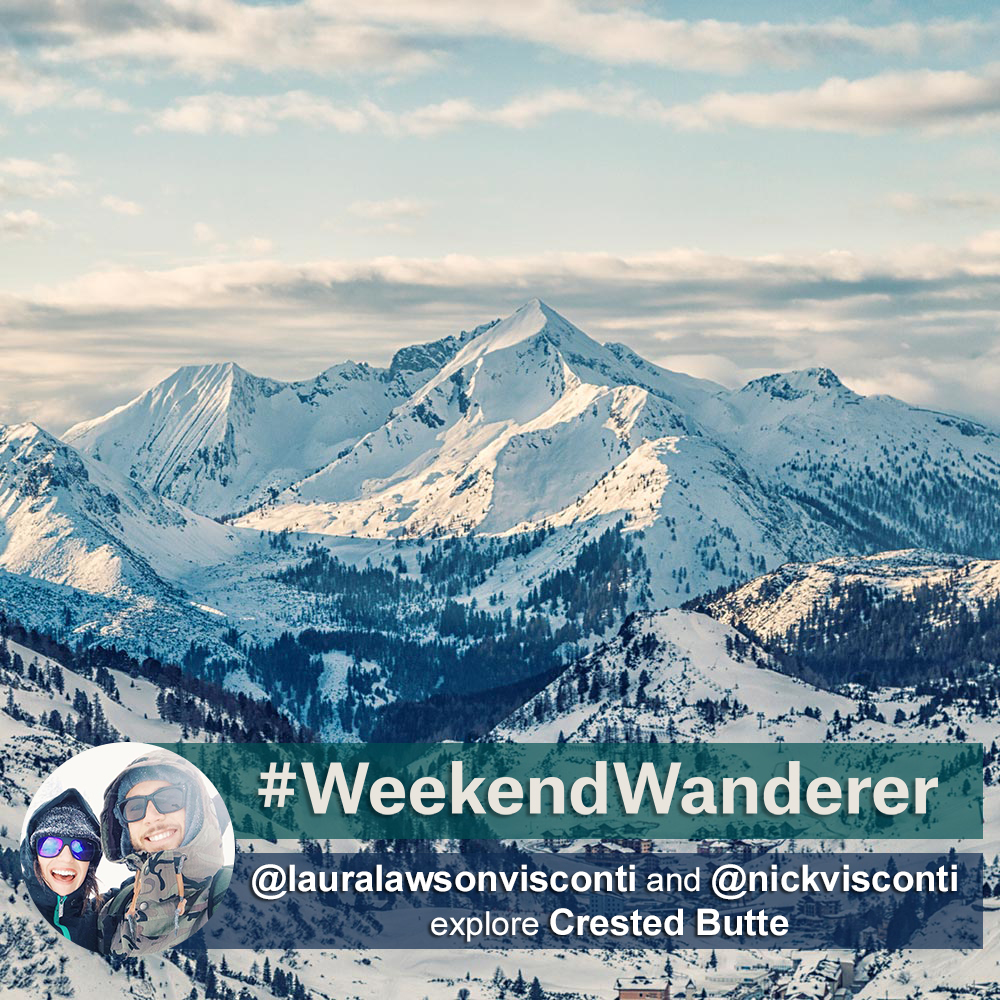 Nick and Laura Visconti are a husband and wife duo hailing from Truckee, California. Laura considers herself a coffee-fueled mountain soul while Nick loves to shred the mountains as a professional snowboarder. They just returned from an Instagram takeover in Crested Butte as part of Alaska’s Weekend Wanderer series. For more Weekend Wanderer posts, make sure you’re following Alaska Airlines on Instagram.

I was so excited when Alaska Airlines invited me and my husband Nick to spend a couple of days in Crested Butte, Colorado as Weekend Wanderers.

Coming from Truckee, a small ski town nestled in the mountains of Lake Tahoe, we were excited to pack our snowboard bags and head out for a ski vacation that I assumed would somewhat mimic our everyday life. But once we touched down in Gunnison after the inaugural Alaska Airlines nonstop flight from Los Angeles, I realized that while Crested Butte may be a small ski town in the mountains not unlike my own home, it had a culture entirely its own. It was, in a word, unforgettable.

Packing for a ski trip: 6 tips to get through the airport and to the slopes faster

Locals ride beach cruisers in 6-degree weather as craggy mountains jut out of the sky in every direction … while it���s snowing, no less. The year-round population is so small that before a full 24 hours had passed, Nick and I were getting recognized in the grocery store and on the ski lifts as the “Weekend Wanderers.” We made friends with Gretchen from Daily Dose where we got our daily dose of juice concoctions (with extra garlic), and chatted all things coffee with Travis from local roastery First Ascent. All our meals had locally sourced ingredients, including one memorable five-course dinner at Uley’s Cabin, accessed via sleigh ride.

Oh, and we snowboarded. A lot. Crested Butte Mountain Resort boasts 121 trails and breathtaking terrain that anyone from your casual weekend wanderer (myself) or former professional snowboarder and X Games medalist (my husband) could enjoy. My husband, who has ridden many of the great ski mountains around the world, says only a few in Switzerland rivaled the austerity and majesty of Crested Butte.

The warmth that oozed out of the heart and soul of this town was something special, and unlike anything I’d experienced. I can’t wait to go back.