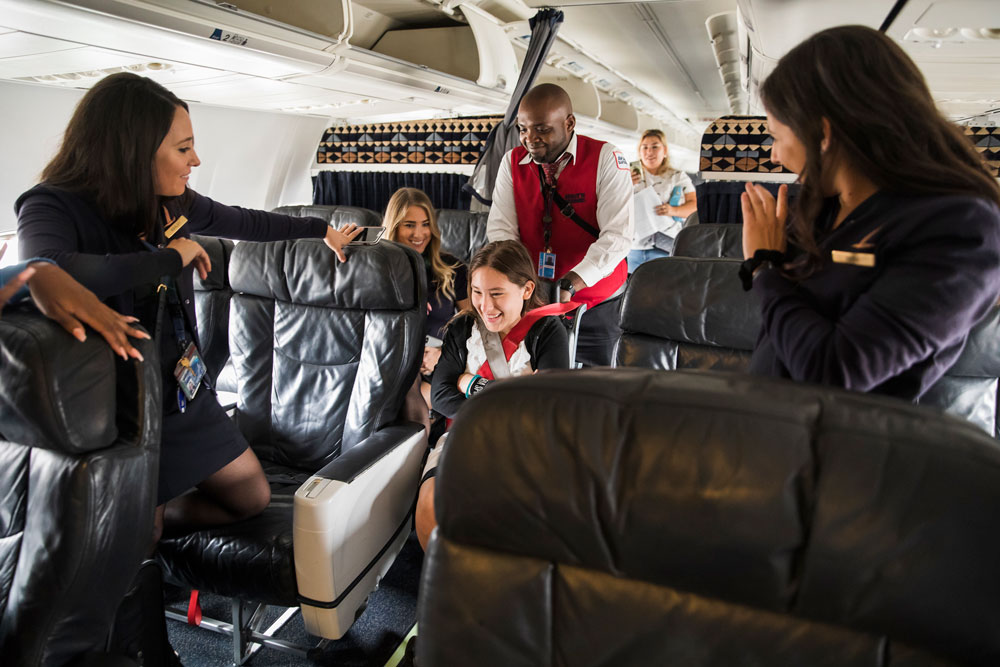 Photography and story by Ingrid Barrentine

The Gaspar family of five has big travel dreams: Washington, D.C. Colorado. Disney World! But for years, just getting on an airplane seemed almost impossible.

Karen Gaspar worried the bustle and noise of an airport might overwhelm her 10-year-old son. “Karlo has sensory-processing and mobility challenges. When we have a new situation, he can have meltdowns,” she says. “It’s hard on him. It’s hard on the family, and It’s not pleasant for other people on the plane.”

This June, the Los Angeles family had the chance to try out flying – without the expense of buying a ticket, without worrying about disrupting a flight, without even leaving the ground. The Gaspars were among 71 individuals with disabilities and their families who participated in the “Ability to Fly” event at Los Angeles International Airport – the first collaboration between Alaska Airlines and Los Angeles World Airports to help travelers with disabilities experience how a commercial flight feels before going on an actual trip.

Families went through the major steps in airport travel: check-in, security screening and the boarding process. Once they were aboard Alaska’s “Toy Story 4”-themed 737, the plane taxied to LAX’s remote gates to simulate taxiing for takeoff, and then returned to the gate. The pilot, Capt. Rick Russek, volunteered for the event because his 12-year-old nephew has autism. “I’ve been with him a lot at a young age and I know the things that could be scary for him,” he says.

For the Gaspars, the event made Disney World feel just a little closer. “People have been answering his questions, and he’s been getting special attention,” Karlo’s mom says. “So far, he loves it!”

“These events are intended to help alleviate the anxiety commonly associated with air travel for individuals with disabilities and their families,” says Ray Prentice, Alaska’s Director of Customer Advocacy. Alaska participates in four to five similar events each year at airports around the country. “There are great benefits to Alaska as well,” he says. “Our volunteers become disability advocates for life, after attending a single event.”

A few families shared their stories as they embarked on their travel adventure:

The Jaronczyk family: “They explained everything to him”

Elyse and Evan Jaronczyk learned about “Ability to Fly” through a Facebook group and brought their 5-year-old son Emmitt, who has a sensory-processing disorder, and his 2-year-old brother, Easton.

Can you tell a little about what Emmitt’s experience is?

Elyse: “We have a lot of issues with sensory sound and noise. It could feel like a full-on meltdown. With kids on the spectrum, you don’t know why they’re going to freak out, and it’s good to know that he is calm about this. I think how they treated us VIP-like was nice because they explained everything to him, and he knew what was happening. Now that he knows this and has a memory of it, we’re comfortable to come back and fly.”

The Livio family: “I think I was more nervous than she was”

Keith and Elin Livio of Torrance, California, travel frequently and had been searching for a program to help their 9-year-old daughter, Kahlen, experience air travel so she can join them on longer trips. Through Kahlen’s therapy for autism, they learned about “Ability to Fly.”

Has Kahlen flown before?

Elin: “This is the first time we actually got her into the airport. Before, we could not even drive in because of her fear of new situations. She gets terrified if you don’t give her a story, like ‘Where are you going?’ This time, we said ‘We’re going to go on an adventure.’ We’ve been talking to her for days. We’re very impressed; she’s just doing very well. I was nervous about how she was going to react with the TSA check-in – and keeping her with us because she likes to wander off. They were very kind and it was so easy. I think I was more nervous than she was. I think we’re ready to actually fly.”

Elin: “Hawaii! She loves the beach. And maybe Florida because she wants to go to Disney World.”

Keith: “That’s the fear – the risk of paying thousands of dollars for an entire trip and then at the end of the day, if she has a meltdown, we’d have to back out. So that’s why being here helped, to go through the motions.”

Elin: “My fear is that she’s going to melt down in an airplane and what am I going to do? How is the staff going to react? If she does, I want to make sure she’s safe and people around understand, ‘OK, this is what’s going on.’ Those are the kinds of fears I have, but everyone here is very well-trained.”

ADDITIONAL RESOURCES FOR TRAVELERS WITH DISABILITIES:

More scenes from “Ability to Fly”