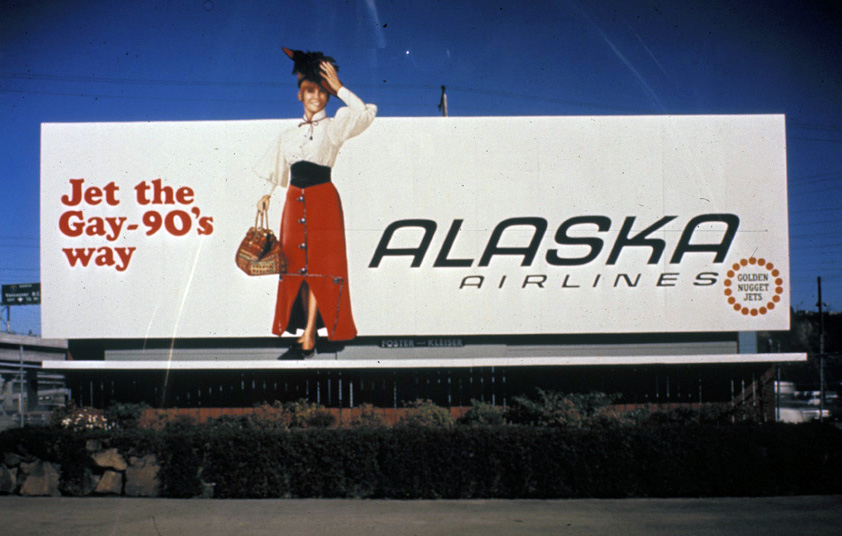 A billboard invites customers to "jet the Gay 90s way."

Three-quarters of a century after the cries of “Gold! Gold! In the Klondike!” a quirky little airline with deep roots in the state of Alaska decided to pay its own tribute to the gold rush.

Alaska Airlines’ “Golden Nugget Service” era launched in the early 1960s, and passengers would not soon forget it.

The rest of the airline’s fleet, including several twin-prop jets, amphibian float planes and freighters, were also decked out in a special “Golden Nugget Jets” paint job.

“It was certainly different,” says retiree Ron Suttell. “The aircraft interiors were described as 1890s bordellos by some.”

Suttell began his four-decade career at Alaska Airlines in 1971, during the height of the Golden Nugget era. He recalls airline president Charlie Willis from time to time dressing up in the gay 90s uniform and playing the banjo onboard to entertain passengers.

One of the era’s most famous promotional gimmicks was “the stilt lady” – a woman clad in the gay 90s uniform, perched on stilts tall enough to allow her to knock on airplane windows and wave at boarded passengers.

“We’ve been quirky throughout our history,” says Suttell. ”We definitely stood out, and that was part of our legacy. We were competing against giants.”

Suttell is a member of Alaska’s Historical Archives Team, a small and passionate group of current and former employees who meet twice each month to sort through decades of old photographs and artifacts.

He began collecting memorabilia on behalf of the airline in the 1970s, for many years keeping it locked away in the loft of the facilities maintenance shop he managed. Word spread throughout the company, and the collection began to grow.

“Of course, I’m in this business because I love airplanes, and one of my treasured collectibles at the time was a Golden Nugget 727 model,” says Suttell. “That was one of the first things I made sure we had preserved in our collection.”

The current team really solidified in the mid-2000s, as the airline began to prepare for its 75th anniversary celebration.

Alaska’s employee programs and events supervisor Paula Marchitto, “the organized one,” is the team leader. She’s been involved since the current team’s kick-off meeting in April 2008, and says her job is to support members like Suttell, newly retired writer and photographer Don Conrard, dangerous goods manager Mike Tobin and aircraft line technician trainer Tim Fahey, who love the airline industry and know the ins and outs of Alaska’s history.

They’re joined by others who volunteer their time out of a love of history and the company that brought them together. “They’re just a fun group,” she says.

“They collectively have a lot of company information in their heads, and we’re trying to extract all of that information out of their minds and put it on paper.”

Today, Alaska’s archives are stored in the Museum of Flight’s archival storage and research facilities located in South Seattle, where museum personnel have consulted and trained the archives team to catalogue and process each photograph, uniform piece and brochure. Each artifact must include a detailed description of how, when, why and where it was used.

“In 1,500 years, we want people to be able to come here and really understand what it was like during the first 100 years of commercial flight,” says Dan Hagedorn, Museum of Flight senior curator.

Eventually, the airline’s archives will become part of the museum’s permanent collection, held “in perpetuity” for future generations. Today visitors can see a Douglas DC-3 in Alaska Airlines period livery in the museum’s Great Gallery. The rest of the archived collection will become available for potential display in the museum’s public galleries once ownership has been transferred.

Some of those items include:

“We encourage airlines to think about their legacies,” says Hagedorn. “Sometimes we get so wrapped up in running the business, because that’s what we do, and sometimes we forget that it’s all about the human experience. It’s sharing human stories.”