By Kathryn Drury Wagner for Alaska Beyond Magazine

It’s an intense progression, becoming a reality TV star. One evening Lauren Bushnell was contemplating her dating life in Los Angeles, and the next, the path to becoming one of the most talked about and envied women in the country was laid out before her, a glimpse of an alluring but uncertain trail. Most certainly, she would not walk it alone.

Over the next several months, an average of 8 million people watched Lauren B. each week as she dated on national television.

They watched her dine with a handsome software salesman named Ben Higgins as his other would-be love interests faded from the limelight.

They increasingly saw her on the cover of Us Weekly and other supermarket publications.

More than a million fans followed her on Instagram.

Luckily for the winner of Season 20 of The Bachelor, Lauren B. had her training to help keep her focused.

“Everyone kept saying how calm and collected I seemed on the show,” the Alaska Airlines flight attendant says. “In my head, I wasn’t. I was nervous, and anxious, and falling in love.”

It was her flying experience that helped her keep her composure. “No matter what kind of day I have, I can keep my cool,” she says of her three years with Alaska.

It’s a good thing; this season was marked by high drama, with Ben declaring his love for two women before ultimately proposing to the beautiful, poised Lauren.

Lauren grew up in Portland, in a family well-acquainted with aviation. Her father has logged more than a million miles as an Alaska passenger; her mother had worked as a flight attendant for American Airlines. It was her mother who suggested that being a flight attendant might suit her oldest child, who was working a desk job in Los Angeles after returning from a backpacking trip. Lauren was already clamoring for more adventure.

Inspired by Lauren, younger sister Mollie also became an Alaska flight attendant. The two schedule flights with each other whenever possible.

“My favorite part about flying with Lauren is that we are able to do so much traveling together,” Mollie says. “Whether it’s going home to Portland for a Blazers game or doing a girls’ trip to Mexico, she is my designated travel buddy. We have bigger plans to eventually travel the world, too.”

Growing up in a family so engaged with flying, Lauren says, opened her eyes to the possibilities of being a flight attendant.

“It’s funny: When I tell people I’m a flight attendant, their eyes light up like it’s the coolest thing ever. I think some people forget that it’s a career option.”

She found that her career with Alaska offered great flexibility and fed her wanderlust, but it also made dating a bit challenging for the then LA-based young woman.

“People think you meet so many people, but when I was at work, I was at work. I didn’t meet people that way, and I was always out of town.”

One evening last summer, Lauren’s roommate joked that Lauren should go on The Bachelor. Lauren says she only half-seriously filled out an online application.

“It was literally 5 minutes. Two photos, name, height, weight, why you want to be on The Bachelor. They called me the next day. I hesitantly went into the office since I was local in LA. But then I met some really cool people. It wasn’t what I thought it would be.”

Lauren soon found herself cast for the show. Her family and friends were amazed.

“It was surreal. It wasn’t something I always wanted or could have seen myself doing. It was so out of left field. I didn’t pack for the show until the night before,” she says. “I kept thinking I might back out.” 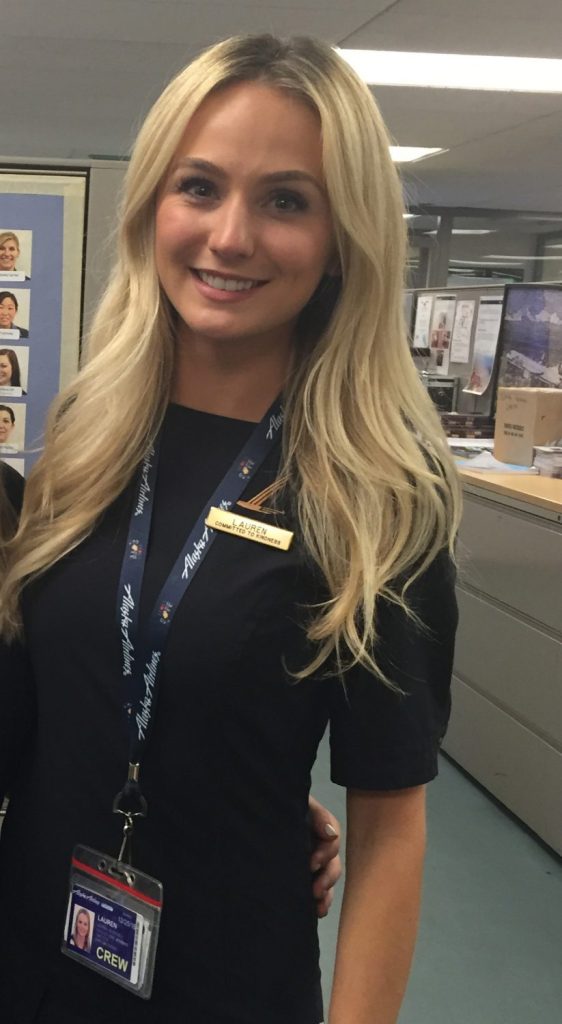 With reality programming such as The Bachelor, contestants might appear on the show for one night, or they might be involved for the entire season—a two-month commitment—like Lauren was. That’s a big leap of faith that for some contestants meant quitting jobs. But the flexibility in her position at Alaska Airlines was fortuitous.

Airline travel volumes tend to taper off in October, so the airline was offering a voluntary staffing-adjustment leave, and Lauren had already planned to take the month of October off to travel through Europe with her sister. All she had to do to make time for the show was get other flight attendants to cover her last couple of trips in September and her first couple of trips in November.

Still, she had to deal with that dreaded chore of packing; a task you might think comes naturally for a travel professional. But it’s a task she struggles with, calling herself a chronic under-packer.

“They give you a list, but it’s very vague, because they don’t know how long you’ll be there,” Lauren says. “A formal dress. Clothing for the tropics. But you might also be in New York or Europe. I literally packed for all four seasons. That was the hardest part leading up to the experience. I figured, well, if I need anything I’m hoping I will have made some friends and can borrow something. People assume there’s someone there to do our wardrobe, hair and makeup, but no, it’s you. It’s a reality show. They don’t help you at all.”

What’s more, there’s no compensation for being on the show—no wardrobe budget. “I’m really practical,” Lauren says. “I’m not going to spend thousands on dresses if I’m going to go home the first night. I did buy some things, but I didn’t go overboard.”

Once she’d prepped for nearly every climate zone on Earth, it was time to check in to a hotel near the Bachelor Mansion in Los Angeles. There, the 28 contestants were kept for four days, sequestered from each other, to meet with producers.

After Night One, which is what viewers see as the television season premiere, seven women are sent home, and the rest of the contestants move into the mansion.

“The whole time, there’s no cellphone, no TV, no iPad, no computer. You’re so disconnected from the outside world. They want you focused on the dating experience, and to make that work, they need you to be fully present and not have any distractions,” Lauren says.

Despite the pressure cooker atmosphere, she thrived. Rita Daniels, her in-flight base supervisor, wasn’t surprised. As a flight attendant, Daniels says, “You learn to work closely with many personalities, so you learn the art of teamwork and getting along with others who see things differently than you. You have to keep your professionalism, your ethics, morals and values. You have to be your own person and not be swayed. Training is five and a half weeks with 75 people. It’s similar to the time frame of the show, immersed with people whom you become close to and some you survive with. It creates a small community.”

Bachelor Nation watched as throughout the season, Lauren and Ben fell in love, and rooted the couple on as he proposed with a 4-carat Neil Lane sparkler in the March 14 season finale in Jamaica. But viewers saw this footage long after the event actually took place (the couple got engaged in real life on November 18, 2015), and the joyful pair had to keep it a closely guarded secret. They could each tell their parents and siblings, but when they left Jamaica, Ben went home to Denver, and Lauren went to Portland.

“I had to trick myself, like I wasn’t engaged,” Lauren says. “I didn’t have a ring on my finger. I could basically only FaceTime with Ben. I couldn’t share my excitement; I had to bundle it up and put it away. That was really hard.”

Sans ring, with lips tightly sealed, Lauren returned to work at the end of November, keeping a light schedule. “The producers were scheduling these secret rendezvous so I could see Ben, and I had to acclimate myself back to normal life.”

Now that the cat is out of the bag, and the whirlwind press tour is over, is there a normal life ahead? Lauren and Ben are determined to try. She’s moved to Denver to be with him and plans to keep working for Alaska Airlines.

Lauren says she looks forward to a time when the two can have dinner together at a restaurant without eyes watching, but admits she’s enjoying the attention, as well. “The people who come up to us and take a photo are all so nice,” she says. “But I’m missing running out to the grocery store and just grabbing something without being noticed. I’m trying to enjoy it, though, because it won’t last. And we love each other so much. We’re so happy.”

Ben remains supportive of his future bride’s plans to continue as a flight attendant. “No matter what job she has, I’ll be a little nervous when she’s away. But she really loves her job, and I ultimately want her to do the things she loves,” he says.

He calls himself a calm flyer who usually “kicks back.” When he hears about Lauren’s desire to whisk him away to destinations such as Hawai‘i and Alaska, he sounds pleased. “That all appeals to me! Being engaged to a flight attendant may come in handy!”

Those who have worked with Lauren at Alaska Airlines, as well as those who faithfully tuned in to The Bachelor series, know this is just one of the ways Ben can count himself a lucky man.

Kathryn Drury Wagner is a Los Angeles–based writer and editor.