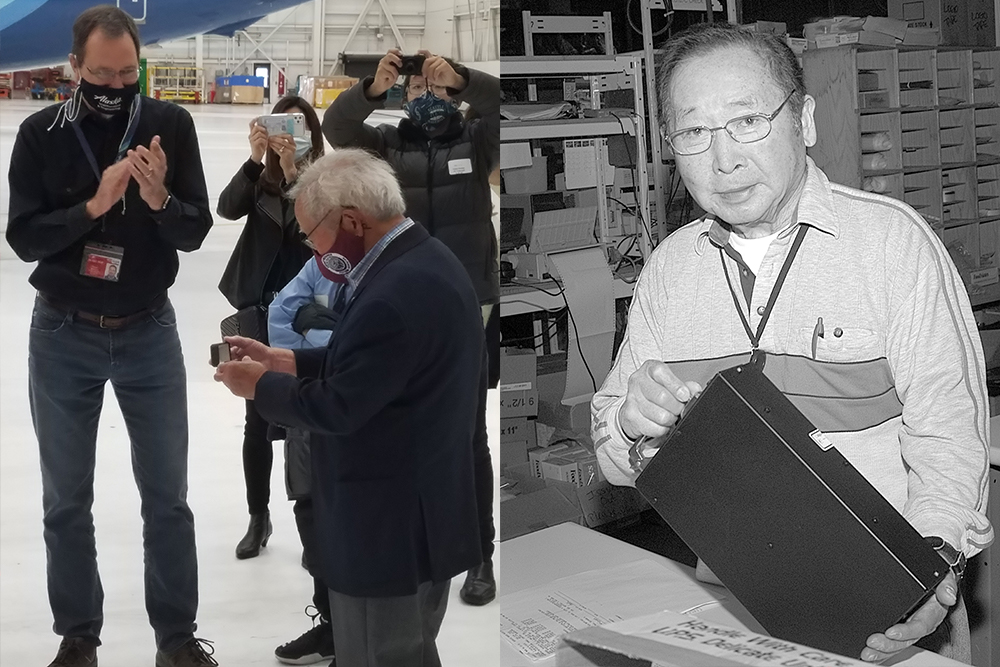 This year was a special year for both Tada Yotsuuye, Seattle line inspector, and the Alaska Air Group family. Last month, Yotsuuye celebrated 55 years as an employee with Alaska, and he’s the first employee to achieve this monumental milestone in the history of our company.

Leaders recently hosted a special pin recognition ceremony to honor Yotsuuye’s 55th anniversary, and there was no shortage of funny stories and notes of gratitude.

“Tada is an incredible Alaska Airlines employee,” said Constance von Muehlen, SVP of maintenance and engineering, during the presentation. In reflecting on this major milestone, she did a little math. The aviation industry is 117 years old (starting in 1903), and Tada has been part of the aviation industry for 74 of those years since he started with the Air Force in 1946. He later joined Alaska in 1965.

“That means not only are you, Tada, a fantastic part of our Alaska history,” she said, “but you’re really part of American airline and aviation history, which we are treasured and honored to have among us.”

Not only is Yotsuuye an Alaska Legend, but he’s also a 2006 Charles Taylor Master Mechanic Award recipient, which is a prestigious award that only 2,888 individuals in the United States have received. He has had a long and distinguished career.

Scott Miller, director chief inspector, reflected on the 19 years he has spent working with Yotsuuye and what a pleasure it has been to learn from him and share laughs along the way.

Whenever he’s asked by co-workers about retirement, Yotsuuye would say with a smile that he had no plans to put away his tools.

Fifty-five years sounds like a long time,” Yotsuuye said during his recognition ceremony. “Ninety years sounds ridiculous, but here I am 55 years with Alaska Airlines at the age of 92 and I am glad to be here.”

When asked what has kept him with Alaska for so long, he said, “Alaska Airlines has the most exceptional people I enjoy working for and with, which makes the time fly by.”

Often referred to as the Jedi Master among his coworkers, Miller researched what it means to be one.

“Jedi Master is the highest rank attainable in the Jedi Order, reserved only for those who have shown exceptional skill and devotion,” he said. “I can’t think of a better way to describe Tada as somebody that has displayed 55 years of exceptional skill and devotion to safety and compliance and helped grow Alaska Airlines into the company it is today.”

CEO Brad Tilden also wanted to express his gratitude during the presentation to Yotsuuye and recognize his dedication to Alaska.

Tada, thank you for 55 years of service,” said Tilden. “It’s just amazing. It’s stunning. This is a great company because of folks like you. We appreciate everything you’ve done to make this great company what it is.”

So, what’s in store for Yotsuuye now that he’s seen what the 55-year pin looks like?

In support of other employees who would like to work toward long-lasting careers with the Alaska family, Yotsuuye offers this advice: “Keep busy and have fun.” Those are two things Yotsuuye is likely to do even as he welcomes retirement with open arms and his toolbox at his side.

Please join us in sharing your notes of congratulations and appreciation below for all Yotsuuye has done to help make us who we are today.

Tada, Alaska wouldn’t be the same without you! May the force be with you, friend.