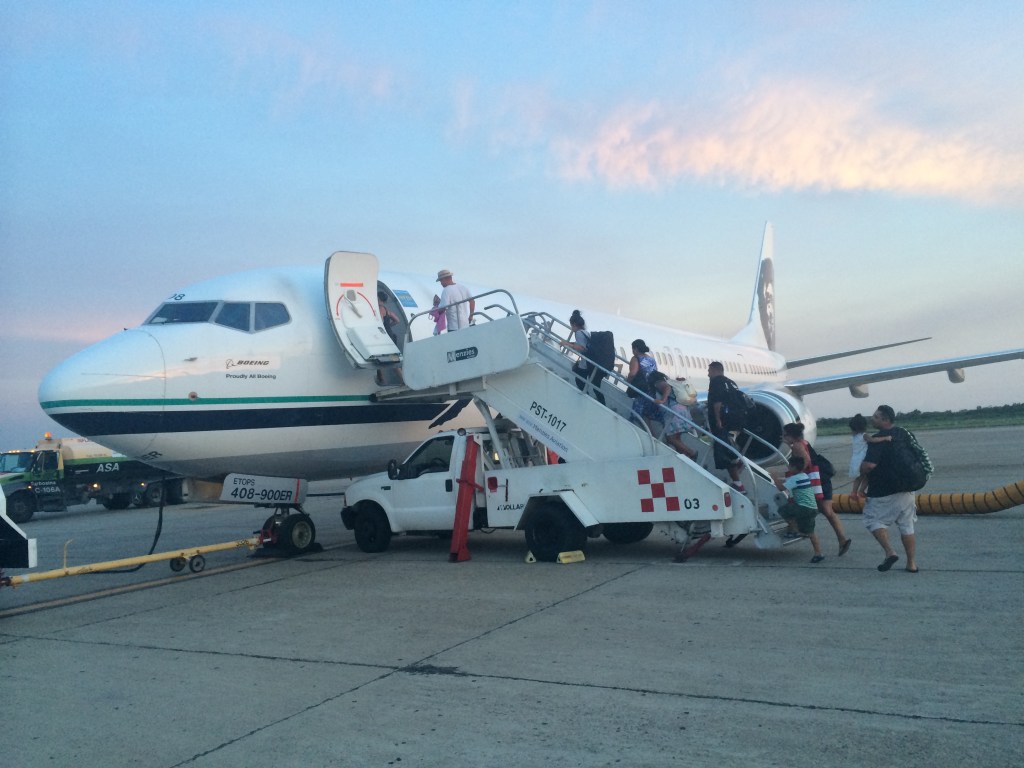 Customers board a relief flight in Mazatlán Sept. 16.

All flights passenger flights to Los Cabos have been canceled.

The following flights are planned for Friday:

These flights are trackable on alaskaair.com.

The first two domestic flights out of Los Cabos arrived safely in Los Angeles and San Diego this evening. A third, flight 279, is expected to arrive at about 9:20 p.m.

The airport remains closed to commercial  air service, but local authorities have authorized outgoing humanitarian relief flights. Customers waiting at the airport are being boarded on those flights on a first come, first serve basis.

All flights to Los Cabos have been canceled.

Alaska will operate six humanitarian relief flights out of Los Cabos International Airport. The six flights to Los Cabos will be loaded with water, food and supplies.

The following flights are planned for Thursday:

These flights are trackable on alaskaair.com.

For media: these photos may be distributed courtesy of Alaska Airlines

Alaska Airlines’ first flight into Los Cabos International Airport since Hurricane Odile hit Sunday is safely on the ground in Los Cabos. Next, Alaska is planning to fly a first flight of passengers from Los Cabos back to Los Angeles.

Flight 251 is trackable on alaskaair.com.

Two additional relief flights are on their way to Los Cabos, one from San Diego and a second from Los Angeles.

Flights 233 and 279 are also trackable on alaskaair.com.

Alaska Airlines didn’t have any flights planned in Mazatlán on Tuesday. But when the airline got word that 74 customers from Alaska and other airlines were flown from Los Cabos to Mazatlán on a military evacuation flight, the company quickly scheduled a rescue flight for stranded customers.

Alaska Capt. Robert Kelly and first officer Vicki Frank flew the aircraft from Los Angeles to Mazatlán, prepared to depart at 7 p.m. local time. Just before departure, the crew got word that 14 additional U.S. citizens were on their way via police helicopter and held the plane an additional 20 minutes.

Frank said she and Kelly began to truly understand the impact of the situation as they flew the customers home.

“Many were in tears after their ordeal in Cabo,” said Kelly. “Some people had no belongings at all. There were several rounds of cheering on the plane while on the way to Los Angeles.”

The flight landed in Los Angeles at 8:51 p.m. with tears, cheers and hugs for the crew.

Alaska plans to begin operating a limited number of flights out of Los Cabos as soon as it’s deemed safe.

Alaska Airlines Los Cabos-based employees are monitoring the situation closely and will advise the company of the airport’s efforts to re-open the airport. New information will be shared here and at alaskaair.com as it becomes available.

For media: these photos may be distributed, courtesy of Alaska Airlines.