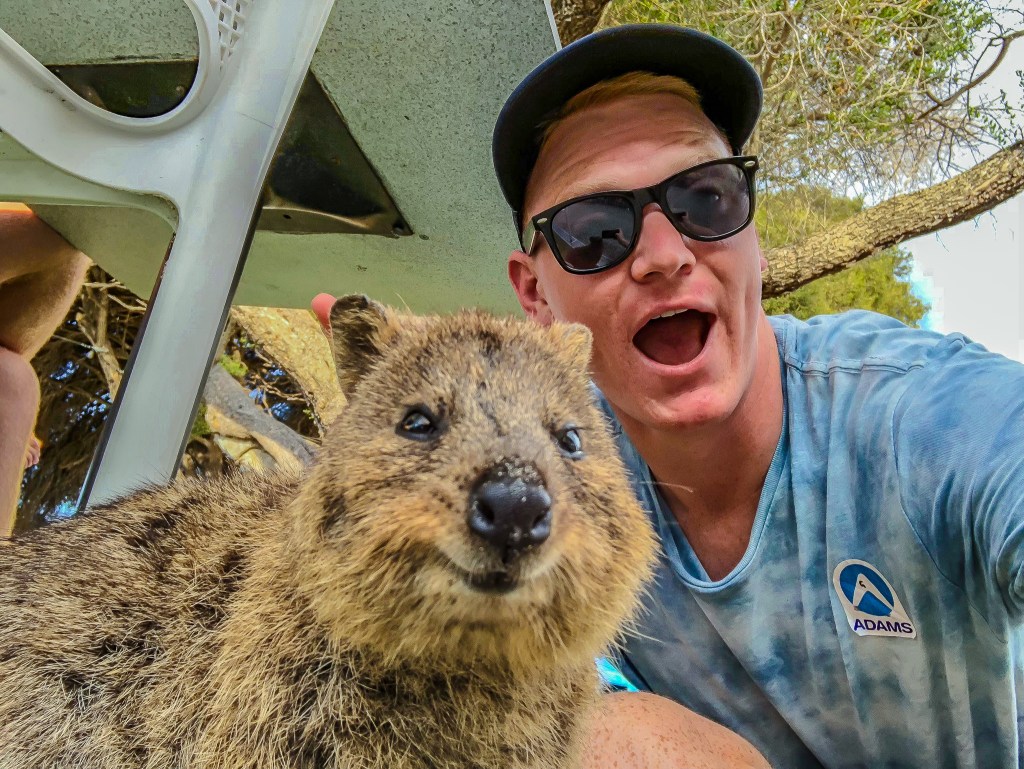 Smile. Dave Anderson snaps a selfie with a quokka.

My alarm clock started loudly chiming at 7 a.m. and I sprang out of bed with excitement.

While I normally loathe the idea of waking up that early, the day I had been impatiently waiting for had finally arrived.

Now if you’ve never heard of this place before — prepare to add it to your bucket list! I’ll never forget the first time I saw pictures of Rottnest Island off Australia’s west coast near Perth, and I immediately knew that I had to visit this place someday. It’s been at the top of my “dream destinations” list for years now, and I was ecstatic to experience its beauty for myself.

I could barely contain my excitement while on board my business class flight from Sydney to Perth with Qantas, an Alaska Airlines Global Partner. During the flight, I definitely enjoyed some Rottnest Island dreams in my comfy lie-flat bed.

Rottnest Island is famous for it’s wildly gorgeous beaches, outstanding marine biodiversity, and for being the home to the one of the cutest animals you’ll ever come across on this planet— the quokka.

These furry little critters are a bit difficult to explain, but I guarantee you’ll experience love at first sight when you see them hopping around Rottnest. Quokkas have been nicknamed the “happiest animal in the world” – and the name suits them perfectly.

To explain the quokka, I would say that they are a cute mix between a “ big mouse” and a kangaroo. They aren’t afraid of human interaction at all, and will gladly come up and hang out with you.

They can only be found in Australia, so it should be no surprise that Qantas decided to name one of their incredible new Boeing 787 Dreamliner planes “Quokka.” You can fly on the incredible Qantas Dreamliner all the way from Los Angeles to Perth (via Melbourne)!

Getting a “quokka selfie” is a popular mission for many Rottnest Island visitors, and that was pretty much the only thing on my mind during the quick 30-minute ferry ride from Fremantle.

When I arrived onto the island, my first stop was to the visitor’s center to ask some questions about exploration options, and where most likely I’d run into the happy quokkas! The friendly worker politely laughed, smiled back at me, and simply responded “don’t worry — if you want a selfie, you’ll get one”.

PHEW! For some reason, I was thinking I’d really have to search for the quokkas to get my picture, but it turns out they are everywhere, and it’s practically impossible to come to Rottnest Island and not see them! 🙂 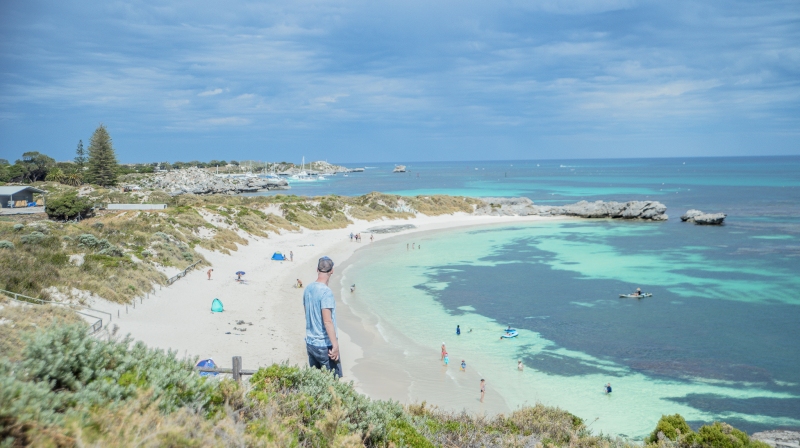 With my mind at ease, the sun shining bright in the sky, and an hour to kill before I needed to be at the Rottnest Skydive pick-up location, my explorations began by walking 10-15 minutes over to Bathurst Bay. This just happened to be the closest point of interest on the map to the island jetty, and was wanted to check out the Bathurst Lighthouse.

On this short walk, I remember I could feel my energy levels raise. While I had only been on the island for about 20 minutes, I had already fallen in love with the vibe. It’s a mixture of a relaxed island pace and adventurous fun. Perfect for just about everyone like families looking for a weekend getaway or young travelers in search of Australia’s best scenery.

I made it to the Bathurst Lighthouse, and came across my first real viewpoint of a typical Rottnest Island beach. Crystal clear waters, bright white sand, and sail boats in the distance are just a few key components.

I set-up my tri-pod, took some photos with me in them (which is kind of rare these days), and enjoyed some sun while sitting on the beach.

Then my biggest fear for the ONLY DAY I had on Rottnest island happened … it started raining! I looked at the forecast earlier in the morning, and it actually looked somewhat promising. I had noticed it was meant to be a little cloudy in the morning, but I really thought it would clear up quickly. Australia weather can be unpredictable.

On my Qantas flight from Sydney to Perth, the flight attendant even told me, “You’re coming at the right time, as it’s 35 degrees (Celsius) and beautiful today.” For my fellow Fahrenheit folk, that’s over 90 degrees! It was so incredibly hot my first day in Fremantle and I was hoping it would stay the same for my entire visit!

The sad realization that I would have terrible weather for my entire day on Rottnest Island was confirmed when my skydiving was canceled. As the Aussies would say, “I was completely gutted, Mate!” I have been skydiving two times in my life, and both jumps were absolutely phenomenal. When I heard that I could go skydiving over Rottnest Island, I knew that I had to do it! There’s no better way to appreciate a destination’s scenery than to jump out of a plane 15,000 meters above it. 😉 Sadly, skydiving wasn’t in the cards for me during this trip, but it just gives me a great reason to head back to Australia soon.

After returning from the Rottnest airport, I met up with my mate Damo, who had just arrived onto the island from Perth. I actually met Damo while backpacking through Thailand, and it was epic that our travel schedules aligned so perfectly!

When it comes to exploring Rottnest Island — there are basically two options.

Since Damo and I are both relatively young and physically fit, we agreed it would be truly pathetic if we took the bus with the older folk. So after a delicious lunch at the Rottnest Island Hotel, we began our biking adventures around the island.

Pedaling around the island

One of my favorite aspects about Rottnest is that there are no cars on the island (besides the buses and National Park transport vehicles) which provides a very calm and peaceful bike riding experience.

So for the next 4 hours, Damo and I spent cruising along these well-paved coastal roads. It was actually kind of nice that it was overcast, because I barely broke a sweat.

The scenery is seriously next level, and every few kilometers there were (clearly marked) attractions where we’d stop, take some pictures, go swimming, or just relax.

My personal favorite stop was without a doubt Parker Point. Not only did it provide an amazing viewpoint, but the staircase led down to a pristine beach in this little cove which was filled with boats.

One of the most memorable parts of the day was witnessing a group of twenty-somethings having a straight up boat party while docked in Parker Point. I couldn’t help but find myself become a little envious as I watched them afar drinking beers and blasting FLUME from the loud speakers they had on board. That’s not a bad summer set-up they’ve got in Western Australia!

As Damo and I continued biking around the island, the feeling of extreme thirst came over us. We regrettably both forgot to fill up our water bottles before embarking on this journey, and realized we’d have to head back to “civilization.” We both thought there would be more establishments on Rottnest Island — but there really isn’t. Besides the island jetty, and one or two other locations on the island — it’s just beautiful nature and smiling quokkas.

So at the next fork in the path, we followed signs back toward the jetty. There was a path across the island that would lead us towards drinking water/restrooms, and another coastal track before arriving back at our point of origin.

We stopped at this grocery store/rest stop near Geordie Bay, and was pleasantly surprised by seeing dozens of quokkas hopping around the area. It was here when I attempted my first round of selfies, and got a couple decent shots 🙂

It was also here where I realized something quite important about quokkas though — they’re looked at as “pests” or “rodents”. It is STRICTLY FORBIDDEN to feed the quokkas on Rottnest Island because their stomach can’t handle human food, and there are very strict laws about how to interact with them. I did find it rather humorous that were “no quokka” signs at the entrances of some of the establishments on Rottnest Island.

*Random Thought — I really think Disney & Pixar Studios need to come up with a movie idea starring a quokka family. They’re just so adorable, and I think it’d be an instant hit. I’m imagining a movie like Ratatouille combined with the Australian aspects of Finding Nemo. Not a bad idea, right?

I like to think that Australia can be a land of extremities — it may have some of the world’s most dangerous snakes and spiders, but it’s also home to some of the cutest and friendliest creatures as well. 🙂

Anyways, our time on Rottnest was nearly over — so we rode back towards the island jetty, returned our bikes, and enjoyed a couple cold Aussie brews to finish the adventure. We found seats in the lovely outdoor patio at the Rottnest Hotel, drank our beers, and my search for the perfect quokka selfie was completed. There were a few awesome quokkas hopping around the patio, and one came right up next to me — and happily posed as I took a picture with him.

I’m not sure if he’s a guy or not, but we named him Gary, and he’s my favorite!