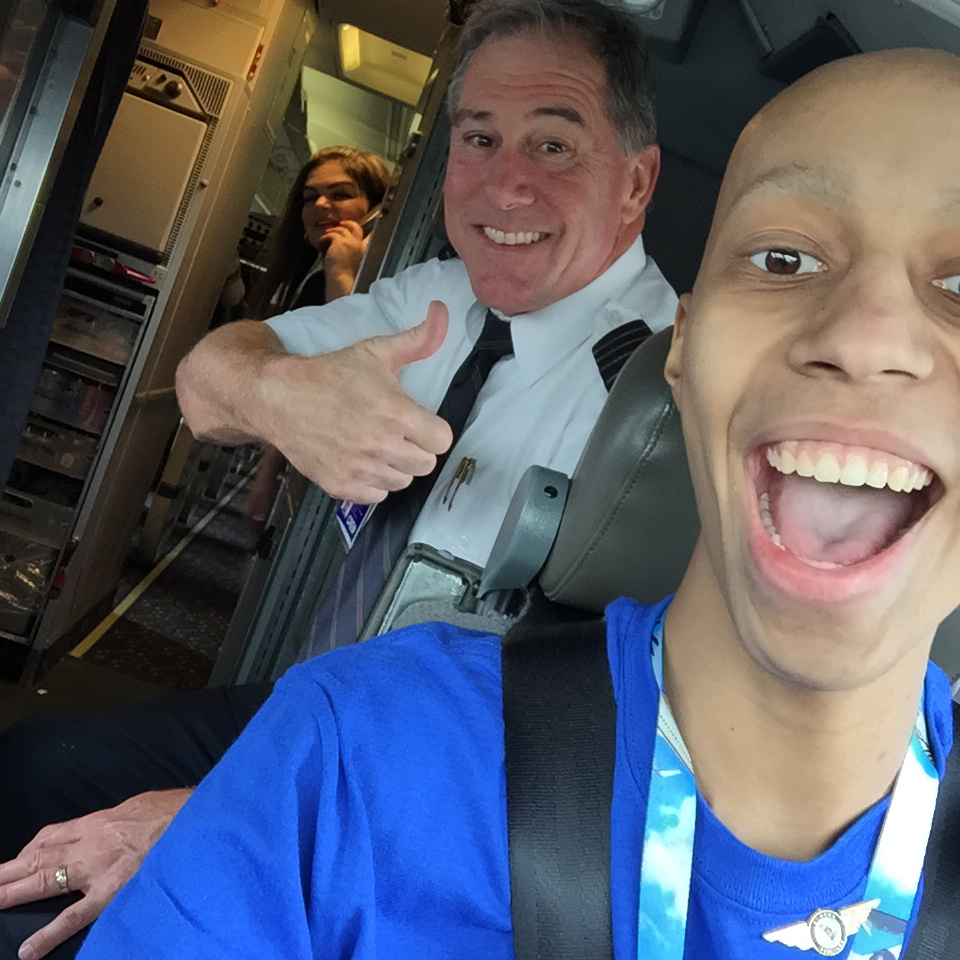 After a year of treatment for a rare form of cancer – 14 rounds of chemotherapy and two major surgeries – the only thing 18-year-old Payton Williams wanted was a family vacation somewhere “warm and tropical.”

Thanks to Alaska Airlines and Make-A-Wish Oregon, the teenager’s wish will come true when he flies to Hawaii later this month.

But first, Alaska Airlines gave Payton another unexpected experience – a surprise visit with his favorite football player: former University of Oregon quarterback Marcus Mariota, the Heisman Trophy winner and the No. 2 pick in the NFL draft by the Tennessee Titans.

Each year, Alaska Airlines “adopts” a child from Make-A-Wish Oregon as part of the airline’s involvement in the Portland Rose Festival. This year, it’s Payton, and Alaska employees in Hawaii and Oregon pulled a few strings to arrange his meet-up with Mariota, as well as other cool experiences over the past few months.

“It’s crazy how much Alaska is doing for me, just because they want to help me out in the situation I’m in,” Payton said.

On Saturday, June 6, Payton and his family (parents Spencer and Kim, and younger sister Shaylee) rode on Alaska’s float in the Grand Floral Parade in Portland. The float is a Hawaiian theme, in honor of Payton and his wish.

“The theme for this year’s Rose Festival celebration is ‘Bloomin’ Good Time’ and this is exactly what we are giving this family,” said flight attendant Contesa Diaz-Nicolaidis, who coordinates Alaska’s involvement as a premier sponsor of the Rose Festival. “We feel like we’re working to make this family feel special. They give us purpose.”

Alaska employees gave Payton a behind-the-scenes tour of Portland International Airport, where he met Captain Don Kayler, the pilot who will fly the plane that takes him to Maui later this month.

Today during Payton’s high school graduation ceremony, Captain Kayler and his wife will be there to cheer him on.

“Cancer has probably touched everyone’s life – including mine – in one way or another,” said Captain Kayler said. “Payton has persevered, all while keeping a positive attitude. This inspires ME to step out of my comfort zone of my daily routines and do a little more to help a family have as nice a time together as I have been blessed to have with my family.”

A surprise in Eugene

Back in April, the entire plan to meet Mariota was kept secret from Payton, who had just finished his final chemotherapy treatment the day before. He wasn’t sure what was happening when a limousine picked up the family at their home in the Salem-Keizer area. During lunch in Eugene, Diaz-Nicolaidis and Chris Bowe, Alaska’s system cargo manager in Portland, dropped hints and eventually unveiled an Oregon football jersey with the No. 8 on it.

That’s when it clicked.

So I get to Eugene today and apparently I'm meeting Mariota 🆗🆒😇

Payton wore the yellow No. 8 jersey, an Oregon cap, and the family was decked out in Hawaiian leis – Mariota grew up in Hawaii. At the university, they were introduced to Mariota, who signed autographs and gave them a tour of the football facility.

“He showed me his locker, which is insane,” Payton said. “It was really awesome. We just got to hang out. I was happy. It was a good day.”

Later on, Mariota passed a football to Payton.

“I caught it, too,” Payton said with a laugh, before deadpanning, “He’s fairly accurate.”

Payton’s mom, Kim, said Mariota was extremely friendly and down to earth, and spent time talking with the family between his workouts for a couple of NFL teams who were scouting him. Mariota was drafted by the Tennessee Titans with the No. 2 pick overall.

“I had a very candid conversation with Payton’s mother, who explained that this was the first day in a very long time in which she felt true happiness and excitement,” Diaz-Nicolaidis said. “The most amazing part of the day was to witness a family who, although they have faced many challenges this year, was still able to make jokes, have fun and smile.”

After graduation, Payton and his family will fly to Maui on Alaska Airlines, with Captain Kayler flying the plane.

Payton also might want to start planning his own trip to Tennessee this fall – Mariota and Payton have stayed in contact and exchange text messages.

“After the draft, I told him congrats, and he told me I should come out to Tennessee to watch a game,” Payton said. “Now I’ve got to be a Titans fan, but that’s all right.”

In the fall, Payton plans to attend Oregon State University, the rival school of Oregon – Mariota couldn’t quite recruit him to Eugene.

“I’m going into bio-engineering, to work with genes and cells, and maybe work on medicines,” Payton said. “Even before I was diagnosed, this is what I wanted to do. Now I have even more of a reason to do it.”

To learn more about Make-A-Wish: