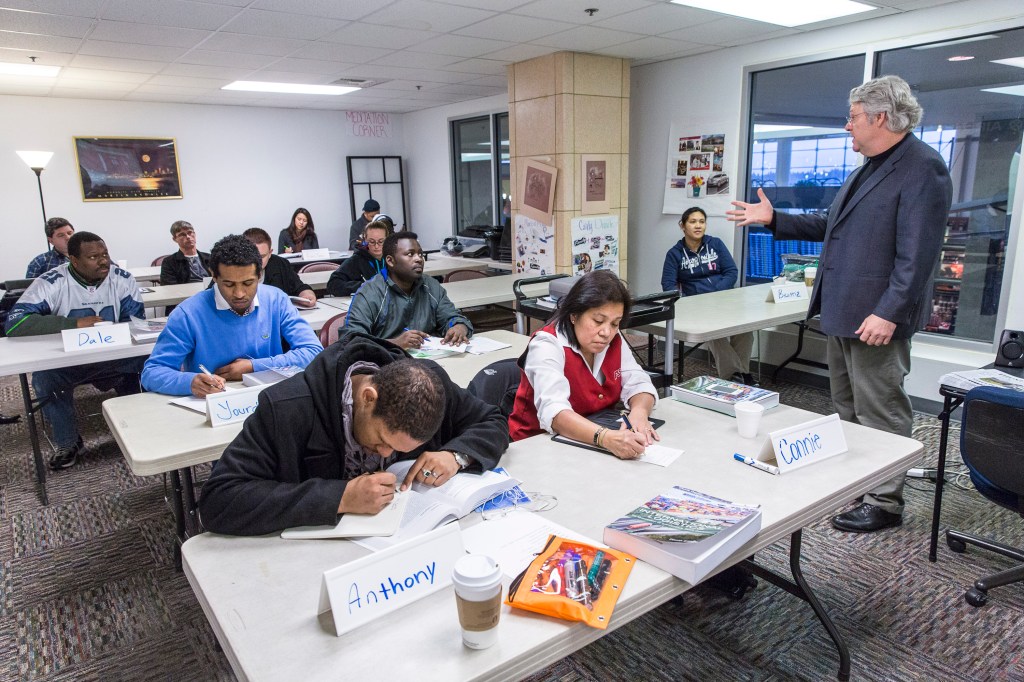 Connie Aguilar is nothing if not ambitious. She works full-time at Seattle-Tacoma International Airport, where she’s tackling the added responsibility of a recent promotion, takes college-credit classes through a special program for airport workers, has two grown children, spends her day off volunteering back at the airport to help travelers, and is planning to go back to school to get a second bachelor’s degree in accounting.

She is also a fierce advocate for her fellow airport workers, encouraging them to take advantage of the resources available to them through Port Jobs, a nonprofit committed to preparing workers for the Port of Seattle economy.

“If I can do it, anyone can,” Aguilar repeats like a mantra.

Port Jobs was created in 1993 to create a place for employers, unions, training providers, community-based organizations and local governments to come together in support of workforce development. Since its inception, it has served more than 78,400 community residents and helped more than 12,300 people find jobs.

One of those jobs was filled by Aguilar. She started about a year ago as a wheelchair attendant for a company that provides ground services to various airlines at Sea-Tac. Soon after, she learned about Airport University, a service offered by Port Jobs to workers in the airport. Most workers who apply are able to take all of their classes free (based on a sliding income scale).

“More and more, what we’re seeing is that people need more skills to advance to better jobs,” says Mary Turla, program manager for Airport University. “Previously, if someone started out in an entry-level position they could continue to advance but now that’s not the case. It takes more skill and higher-level credentials to get on the higher-level career path. That’s where Airport University comes in.”

Earlier this year, Alaska announced a $1.5 million grant to support job training at Sea-Tac Airport through Port Jobs and Airport University. The money will effectively double the number of courses, college credits and students in Airport University, as well as enable Port Jobs to add more advanced courses.

Turla says they work closely with both employers and students to figure out the skills that people are needing to advance in their jobs and have incorporated classes on customer service, computer skills, safety and more as a result of those conversations.

We’re seeing more and more people getting jobs thanks to those new skills, and with the gift from Alaska we’ll be able to offer more courses,” she says.

Aguilar earned her bachelor’s degree in marketing 20 years ago at home in the Philippines and was interested in attending school in the U.S. to see what it was like. Since trying her first Airport University class about a year ago, she’s taken at least one course every quarter, in everything from Microsoft Excel to a class deconstructing transportation and logistics.

She believes there is a direct link between the classes she’s taken and a recent promotion to a supervisor role over a team of wheelchair attendants. Plus, she’s been able to apply many of the skills she’s acquired to her new role.

Right now, Aguilar is enrolled in “Managing Customer Service,” a class that she says she’s learning a lot in – despite an 18-year career in the customer service industry. And the lessons she’s learning go hand-in-hand with her volunteer work at the airport.

“You would think I’d learn everything about customer service dealing with people every day and that’s it,” she says. “But really it’s deeper than that. Customer service is not just answering their questions, it’s about making a connection.”

Now she’s trying to encourage another coworker to take some Airport University classes, where he’ll be able to earn college credits from Highline College right there at the airport.

I tell him if I can attend classes, if that guy can do it and that girl can do it, you can do it.”

“It’s just so awesome that I can attend school right here at the airport, and it’s really professional classes,” she says.