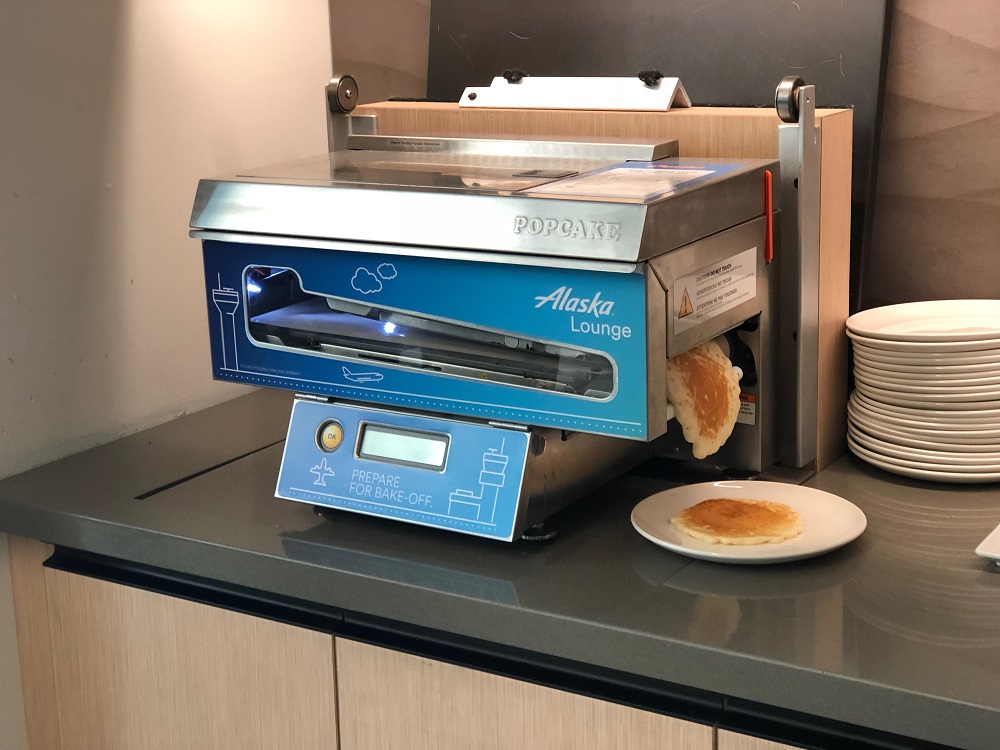 How many breakfast chefs does it take to make 180 pancakes in an hour?

None, if you have a pancake machine.

For those of you who’ve spent any time in an Alaska Airlines Board Room, you know what we’re talking about.

If you haven’t, imagine an office printer. But instead of paper, it prints fluffy, delicious pancakes.

“Kids love it. Adults love it. Everybody loves it,” says Jean Hill, Seattle Board Room supervisor.

The machine was the first of its kind at Seattle-Tacoma International Airport, and Alaska was the first airline in the United States to bring the machine to its airport lounges, nearly four years ago.

Today, there’s one in each of Alaska Airlines’ four Board Room locations, in Seattle, Anchorage, Los Angeles and Portland, Oregon.

Rumor has it, certain frequent fliers even schedule their trips to the airport around the pancake machine’s hours, which have been expanded to accommodate its popularity.

And it’s not just the novelty – the pancakes themselves are objectively delicious, thanks to a custom pancake mix made with fresh, healthy and all-natural ingredients.

The machine was invented by Marek Szymanski, a Polish-Australian man with big dreams to automate the pancake-making process for Saturday morning family breakfasts.

From 2000-2004, Syzmanski went through a number of prototypes, preparing and consuming more than 1 million pancakes before he designed the pancake machine we know and love today.

“The first machine, really it was like Chitty Chitty Bang Bang breaking the eggs and making the batter from scratch,” says Mike Genereaux, vice president of sales for Popcake North America, the machine’s distributor.

Genereaux says there more than 7,000 machines around the world, in settings from university dining halls to hospitals to casinos. Some “Hollywood types,” have even gone so far as to purchase their own personal pancake machines.