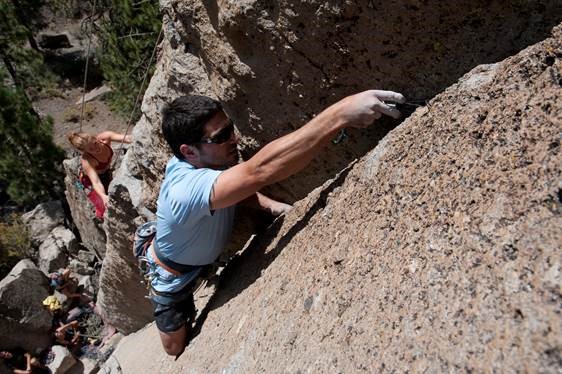 One of the most fantastic mountaintop views is from atop the Grand Teton, a 13,770-foot crag that towers above its namesake park in Wyoming. Look east and the Jackson Hole valley spreads out before you, with Timbered Island, a glacial moraine now heavily treed. To the west, the Jedediah Smith Wilderness with its cloud-scratching peaks is sprawled before you.

Of course, to enjoy this view, you have to climb. It’s not as daunting as you’d think. There are a couple climbing concessions in Grand Teton National Park that will both teach you how to climb, and escort you to the summit.

Ready to get outside? Explore outdoor adventure deals at alaskaair.com.

While the Grand is referred to as America’s Matterhorn, it’s not the only peak experience to be had in the West. Yosemite National Park, of course, is a climber’s Mecca, with El Capitan perhaps the greatest challenge in the Lower 48 states if not the entire world. Half Dome also presents a tremendous challenge (though hikers can walk most of the way without need for ropes and pitons; the final 400 feet are ascended with help from cables to steady yourself as you go).

So where to go?

Here are some options designed around airport hubs:

Fly into Bozeman, and you can either catch a shuttle flight or rent a car and drive to Jackson to tackle the Grand and her many sister peaks in the Teton Range. The Wind River Range with countless other options is within reach, too. With some 60 glaciers, the Winds are perfect for mountaineers, though the Cirque of Towers is a magnet for climbers.

Fly into Salt Lake City and you can take a shuttle flight or drive to Moab and head into Arches or Canyonlands national parks to tackle the endless canyon walls to be found. Fisher  Towers, just south and east of Arches along Utah 128, has been a climbing challenge since the 1960s.

Fly into Fresno, and Yosemite National Park, Sequoia National Park, and Kings Canyon National Park all are about 90 minutes away by car. While most climbers focus on the routes rising above the Yosemite Valley, the park’s high country includes many possibilities, such  as Cathedral Peak with its granite flanks. Check out the guided trips offered by Southern  Yosemite Mountain Guides. Show them your Alaska Airlines boarding pass for a 10 percent discount.

Climbers visiting Yosemite can also fly in to Mammoth Lakes Airport. From there it is a 1.5 hour drive and you’ll pass many climbing locations along the way. Bonus: The drive from Mammoth to Yosemite is also very scenic.

Want to get the Yosemite experience now? Google Maps has the perfect trial for a soon-to-be Yosemite climber.

In Sequoia, a popular pitch is The Angel Wings, a nearly 2,000-foot wall of granite at the entrance to the Valhalla Cirque that offers numerous challenges. At Kings Canyon, seek out Charlito Dome and Charlotte Dome along Bubbs Creek. You will have to work for it though; it’s an 8-mile hike in.

Fly into Palm Springs when summer is a bit too hot, enjoy climbs and bouldering at Joshua Tree National Park and you can always check back in during the cooler winter months. Alaska can get you to Palm Springs, which is less than an hour’s drive from the park. As Yosemite is to big wall climbs, Joshua Tree is to bouldering; climbers come from the world over to work on their bouldering problems. According to park officials, there are more than 8,000 climbing routes in the park. Be sure to pack plenty of chalk!

Get outside this summer and fall and find great discounts and deals with Alaska’s Outdoor Adventure program. Need inspiration? Read “Mountain biking in the West” and “Unplug, unwind and get wet on a Western float trip.”