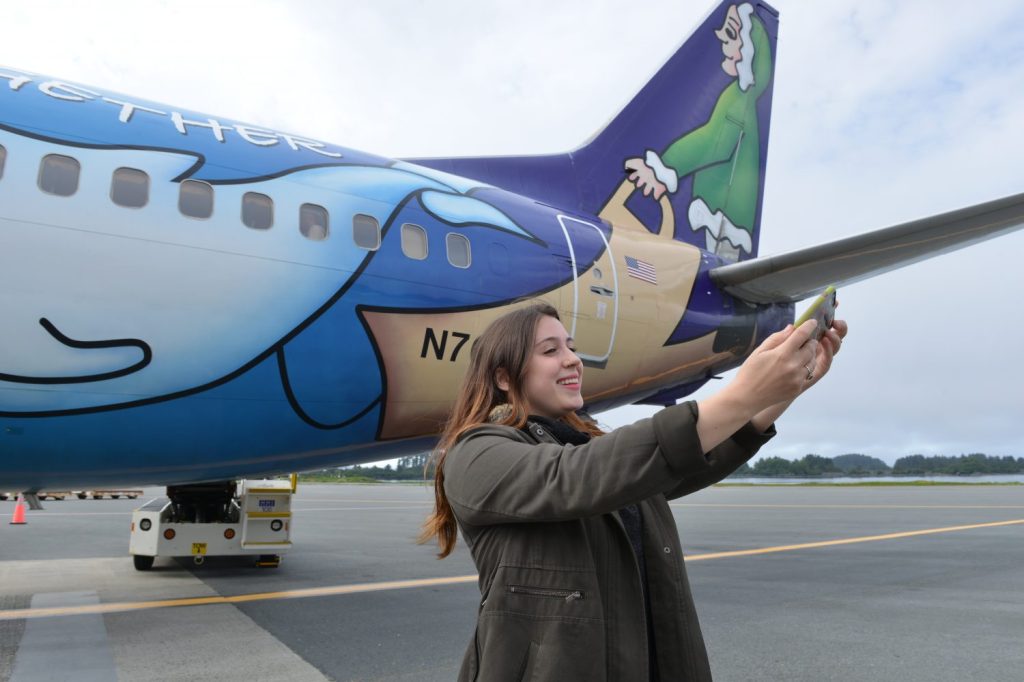 When Alaskans celebrated 50 years of statehood in 2009, Alaska Airlines decided to honor its namesake state by painting a special Alaska-themed paint theme on a Boeing 737-400.

But with a state so vast and unique, the company had difficulty coming up with a design that was inclusive of everything from the ice in the Arctic to the tundra in the Interior to the rainforest in Southeast.

In August 2008, Alaska Airlines launched a statewide “Paint the Plane” contest, in which schoolchildren from Ketchikan to Barrow submitted their designs for the plane’s new paint job. Ultimately, a panel of Alaska artists, former governors and other prominent Alaska leaders selected a design by Hannah Hamberg, a 16-year-old student at Sitka High School.

“I remember being on the ferry to Juneau and trying to come up with symbols that represent all of Alaska,” Hamberg said. “I also wanted to illustrate this idea that although Alaska has a huge land mass, it’s really made up of small communities that take care of each other.”

Hamberg’s design features a musher and sled dog, state ferry, canoe, bear and whale. All of these elements, representative of the entire state of Alaska, come together under the statement, “We’re all pulling together.” The plane was publicly debuted in April 2009.

“We live in a state whose people reside in some of the harshest, most remote areas of the country, and we must depend on each other in good times and bad,” said Marilyn Romano, regional vice president in Alaska. “I think of the phrase ‘We’re all pulling together’ often. Whether we are flying a basketball team from Barrow to compete in a tournament, or rushing an abandoned fawn from Ketchikan to Anchorage, our airplanes connect all of us in Alaska.”

Prior to working for Alaska Airlines, Romano judged the “Paint the Plane” contest and recalled seeing Hamberg’s design when it was a sketch on an 8.5 by 11 inch piece of paper. 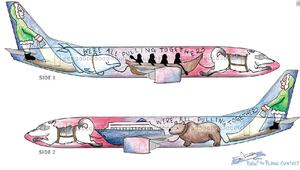 “Hannah captured the essence of the entire state,” Romano said. “From mushing to wildlife to fishing – it is all there. All while bringing the illustration to life with the phrase, ‘We’re All Pulling Together.’”

Now, seven years later, the plane deemed the “Spirit of Alaska Statehood” has officially retired. The plane made its final flight on Thursday, June 16, carrying passengers from Sitka to Seattle. Hamberg has since graduated from college in the Lower 48 and returned to Sitka to work as a graphic designer for the local newspaper.

“One of the most fun parts in designing the plane was getting to work with a professional graphic designer,” Hamberg said. “I’ve been drawing since I could hold a pencil, but I think this experience helped inform my decision to become a graphic designer.”

Hamberg and her family were at the airport on Thursday, to bid farewell to her plane as it left the state of Alaska for the last time. While in service, the “Spirit of Alaska Statehood” completed 31,533 flights and flew a total of 55,382.6 hours. 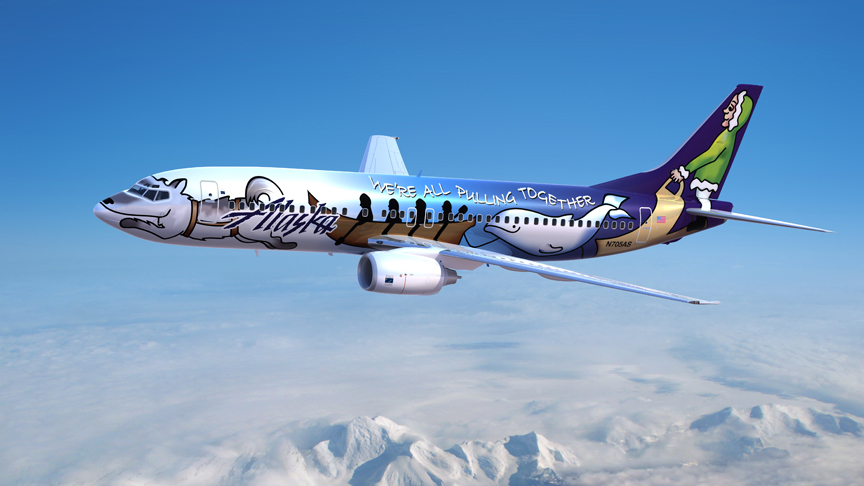 “It was bittersweet to say goodbye,” Hamberg said. “It had a good run and I will miss seeing it.”

All week the plane flew most of its final segments within the state of Alaska, stopping in Kotzebue, Nome, Bethel, Fairbanks, Anchorage, Juneau, Ketchikan, Wrangell, Petersburg, and finally making its final flight from Sitka to Seattle.

Alaskans from all over the state shared their favorite “Spirit of Alaska Statehood” memories on the Club 49 Facebook page as the plane embarked on its farewell tour. Comments summarized the great deal of pride and passion Alaskans feel for their state and this special plane.

“Our kids love seeing this plane,” Heather Payenna wrote. “They always wonder where the puppies are inside the plane if they can see them on the outside.”

“Seeing the plane at the gate provided a chance to talk to the people visiting Alaska about all the details of the paint scheme and what it represented for us,” Jim Lima wrote. “It made people happy when they saw it.”

Now the plane will head to a heavy maintenance facility, where it will be repainted a generic color and returned to its pre-lease state before officially leaving the Alaska Airlines fleet.

As Christine Clendenin wrote, “You can retire the plane, but not Alaska’s spirit.”