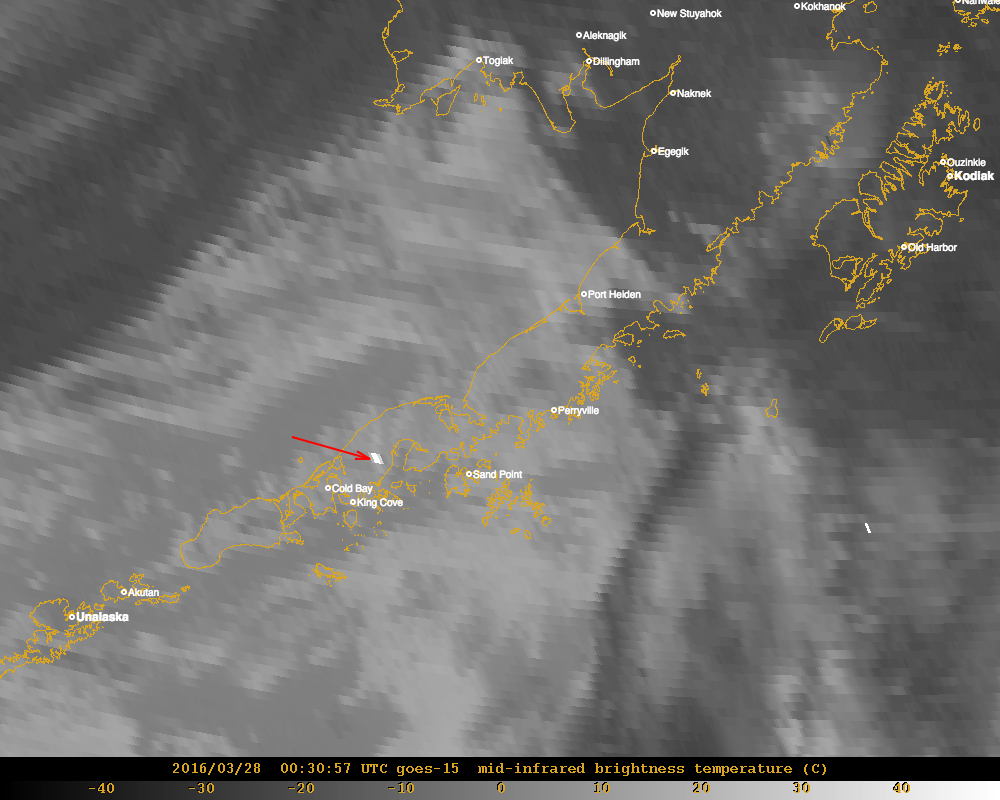 Operations have been restored to six northern cities in Alaska as ash clouds from the Mount Pavlof eruption have dissipated. Regular flights have resumed to and from Bethel, Nome, Kotzebue, Barrow, Fairbanks and Prudhoe Bay today and Alaska’s employees are working hard to get customers and cargo to the affected communities.

Alaska has added one extra flight between Anchorage and Nome and Anchorage and Kotzebue respectively and upgraded the plane to Bethel from a 72-seat combi to a 144-seat passenger jet.

Customers with tickets purchased on or before March 28 for travel between March 28-30, may rebook through April 3 without incurring a change fee or additional costs, or apply for a full refund for the unused portion of their ticket by calling 1-800-ALASKAAIR (1-800-252-7522).

Alaska Airlines is planning to operate the remaining scheduled flights in and out of Fairbanks, Barrow and Prudhoe Bay this afternoon/evening. Due to the changing weather conditions, the airline will continue to carefully assess the location and altitude of the ash. If flying conditions deteriorate and are deemed unsafe, additional flight cancellations are possible.

Through 2 p.m. today, Alaska has canceled 28 flights due to strong winds that continue to push ash from the Mount Pavlof volcano north, precluding operation into Bethel, Nome, Kotzebue, Barrow and Prudhoe Bay. The canceled flights represent about 57 percent of Alaska’s flights to the most northern region it serves and affected 2,900 customers today, and more than 6,200 travelers since the active volcano erupted Sunday evening.

Customers are strongly encouraged to check the status of their flights at alaskaair.com prior to heading to the airport.

Alaska’s System Operations Control (SOC) this morning is closely monitoring ash from Mount Pavlof volcano as strong winds continue to push ash into northern Alaska. Today Alaska has suspended 14 flights to Barrow, Bethel, Kotzebue, Nome and Prudhoe Bay, affecting some 1,400 passengers.  Early indications from weather reports, satellite images and the Alaska Volcano Observatory suggest the ash cloud is moving towards Fairbanks and could impact flights to and from that airport later today. We’ll make a decision about afternoon and evening flights to the affected cities by 12:00 PM Alaska time.

Given the extreme weather conditions, we’ve extended our flexible travel policy allowing customers with tickets to these affected cities to rebook their travel through April 2.

If you have a reservations to one of the affected cities, please check the status of your flight before leaving home on the Alaska Airlines mobile app, at alaskaair.com or call 1-800-ALASKAAIR (1-800-252-7522).

Alaska Airlines has canceled 41 flights to and from six cities in northern Alaska including all flights operating to and from Fairbanks, due to a massive ash cloud that is moving north at up to 65 knots (75 mph). Unaccompanied minors and pets traveling as cargo have also been embargoed until weather conditions improve. The canceled flights affect 3,300 passengers. Mount Pavlof, an active volcano located 600 miles southwest from Anchorage, Alaska, has been actively erupting since Sunday evening.

Flights are suspended to Barrow, Bethel, Fairbanks, Kotzebue, Nome and Prudhoe Bay until Alaska is able to assess weather reports after daylight March 29, 2016. If weather conditions improve, Alaska will resume its regularly scheduled 49 flights to the affected six cities tomorrow. [Note: An earlier version of this story incorrectly reported 54 scheduled flights a day to the six affected cities.]

Volcanic ash poses significant safety concerns to aircraft on the ground and in the air, as it limits visibility and damages engines.

“We simply won’t fly where ash is present,” said John Ladner, Alaska’s director of operations.  According to our weather partners at WSI and the Alaska Volcano Observatory, Mount Pavlof has continued to push ash into the sky since it erupted last night. That and the river of wind pushing the ash north and east has created a potential for ash encounters in flight. We have suspended evening flying in these affected cities and will resume operations when we can confirm through weather and pilot reports that it’s safe to fly.”

If you have a reservations to one of the affected cities, please check the status of your flight before leaving home on the Alaska Airlines mobile app, at alaskaair.com or call 1-800-ALASKAAIR (1-800-252-7522).

Passengers with tickets purchased on or before March 28 for travel between March 28-29, may rebook prior to March 31, 2016, without incurring a change fee or additional costs, or apply for a full refund for the unused portion of their ticket.

In the meantime, Alaska Airlines employees are stocking up on personal protective gear, air filters and plastic to cover engines and other airplane parts.

“Our top priority right now is to take care of our customers and employees in the affected areas,” said Marilyn Romano, regional vice president – Alaska. “We know our customers depend on us to get them where they need to go and we apologize for the inconvenience this is causing them.”