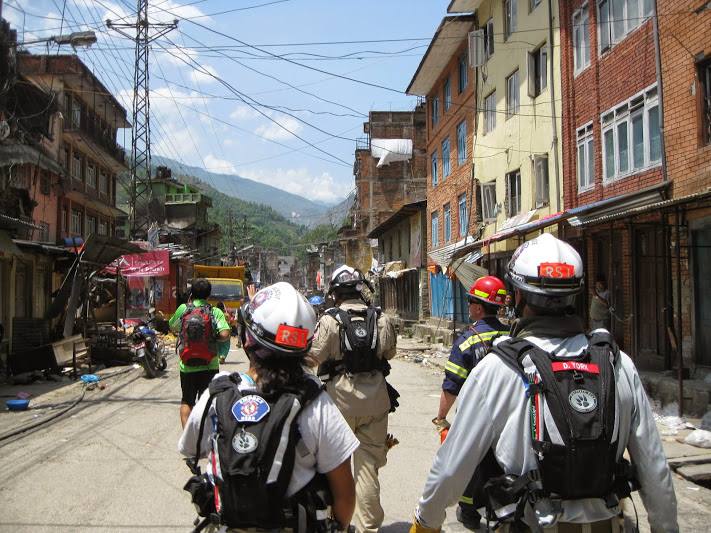 She’s been a rescue operations volunteer with disaster response nonprofit EMPACT Northwest for the past five years, and when the United Nations asked for search and rescue teams to gather in Kathmandu, Wong-Underwood and team answered the call.

Within 72 hours of getting reports of the earthquake, the four-person EMPACT Northwest team was on the ground. Wong-Underwood and her teammates are specially trained to be able to search through concrete and rubble and spent hours backpacking into remote villages to assess damage and search for survivors. After each village, they reported their findings to the UN.

“Every day of my life I know how blessed I am, and because of that I feel that I’m required to give back to the world,” she says. “I happen to be very fortunate to be trained with EMPACT and have this ability to give back. That’s not lost on me. I know I’ve been given this great opportunity to have this skill set, and to not use it feels like a waste.”

EMPACT Northwest was formed in response to the 2010 Haiti earthquake, and sends teams on disaster response missions following major disasters. The organization is entirely volunteer-driven, meaning Wong-Underwood and her teammates pay out of pocket to travel to disaster zones, spending thousands of dollars each trip.

Want to help? Make a cash donation to EMPACT Northwest at empactnorthwest.org.

Since first volunteering for EMPACT five years ago, Wong-Underwood has responded to many major disasters. She traveled to Japan after the 2011 Fukushima earthquake, to Pakistan after devastating flooding in 2010, to Haiti after the 2010 earthquake, to the Philippines in 2013 after Typhoon Haiyan and most recently to the Oso, Washington landslide in 2014.

“Oso was probably one of the hardest appointments for me,” says Wong-Underwood, who lives on Washington’s Key Peninsula. “We were looking for our neighbors. I could relate to everything that these people lived.”

Wong-Underwood says with every mission she sees how small the world really is, and how connected people are.

“I’ve never seen people starving the way I did in Pakistan. A father brought me his two children who were starving and begged me to help them. He was willing to never eat again if his children could have food. How small can our world be at that moment? You saw nothing but another human being wanting the best for his children,” she says.

More than seeing differences in these disasters, I see how the same we are. We may not speak the same languages; we may not have the same facial features – but we are the same.”

Wong-Underwood spent eight days on the ground in Nepal, during that first week that is so crucial for search and rescue operations. Now she is back at home in the Pacific Northwest, and says her day job and volunteer job have more in common than you might think.