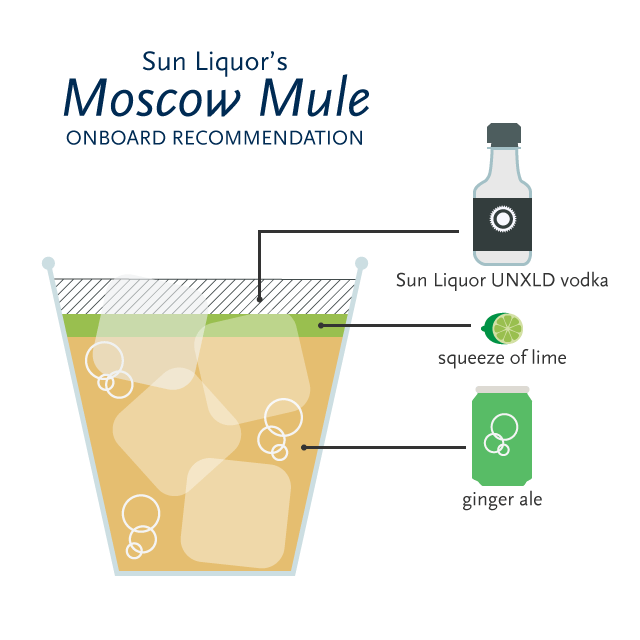 You don’t need a copper mug to enjoy this onboard twist on the popular Moscow Mule.

This crowd-pleasing drink (and its accompanying at-home recipe) is shared by Erik Chapman, barman and distiller at Seattle’s Sun Liquor Distillery, a small, local business which produces the premium gin, rum and vodka served onboard Alaska Airlines flights.

The Moscow Mule came about in the 1940s, when the owners of Smirnoff Vodka – a relatively unknown and unpopular spirit at the time – teamed up with the owner of L.A.’s Cock’n Bull restaurant who was trying to promote his own ginger beer.

With a squeeze of lime and an insulating copper mug, they created the iconic cocktail that’s seen a resurgence in popularity over the past five or so years.

Flying today? Ask for ginger ale and a wedge of lime with your Sun Liquor UNXLD vodka.

If vodka was to have its own classic cocktail, the Moscow Mule would be it,” says Chapman.

Chapman says the iconic copper mug serves a practical purpose keeping drinks cool on hot summer days, but more than that it adds an element of fun.

“I think there’s just something really pleasing about it,” he says. “We’re so used to seeing drinks in a clear glass, that it’s cool to get something in a copper mug that has a wonderful flavor.”

If you make it at home, Chapman recommends finding a ginger beer without much sugar. Top everything off with a squeeze of lime, then let the lime float on top.

Onboard, swap the ginger beer for ginger ale and you’ll find a taste close enough to have you dreaming of summer days and copper mugs. What’s your favorite onboard cocktail?