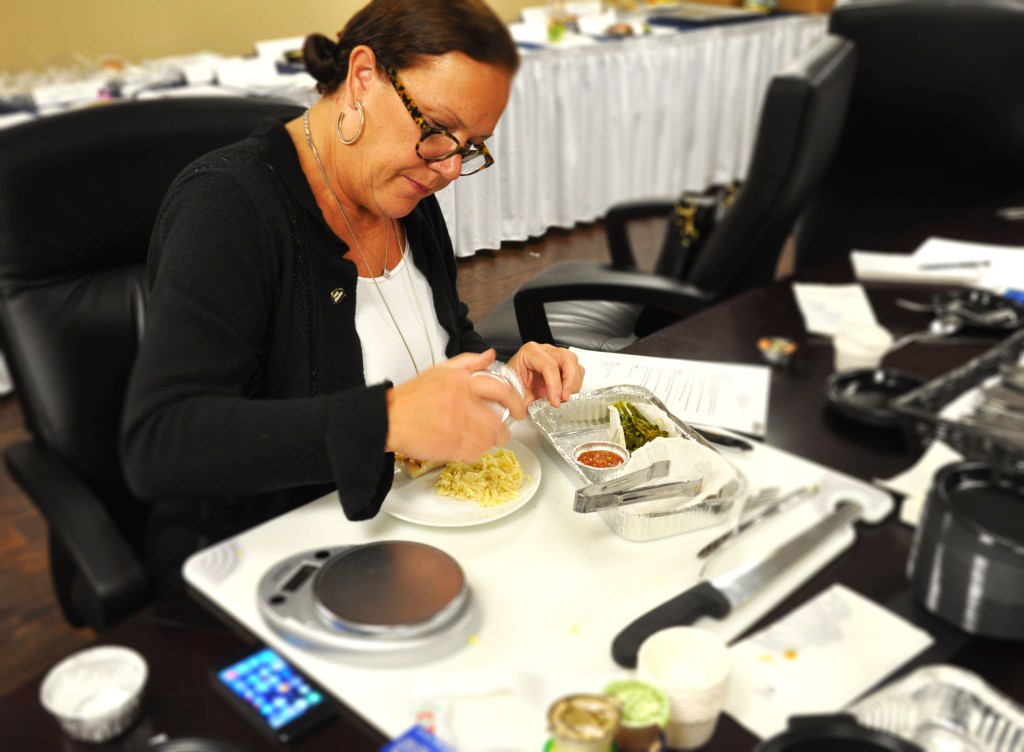 A team of experts plates and samples every single dish before it is boarded. In this photo, Alaska Airlines onboard food and beverage product manager Kirsten Robinett plates a pasta dish in a recent menu quality check.

A team of experts plate and sample every single dish before it is added to the menu. In this photo, Alaska Airlines onboard food and beverage product manager Kirsten Robinett examines a first class meal in a recent menu quality check. Pictured here: Cucina Fresca penne with herb-roasted chicken breast and broccoli florets.

Why does airplane food taste so bad?

Taste buds are dulled and even the most carefully prepared dishes are, at best, reheated leftovers. It’s no wonder that airline food has a bum rap.

But Alaska Airlines’ chef and a team of onboard food and beverage experts have spent the past few years working to change that.

“We don’t want to just have good airline food – we want to have good food, period,” says Lisa Luchau, director of Alaska Airlines’ onboard food and beverage services.

Members of the food and beverage team scour Seattle’s restaurants for inspiration for what’s hot in the local market. Then they take those ideas and figure out how to make them fly.

Chef Joshua Rappaport has a background in classical French cuisine and has cooked in some of Seattle’s most elite restaurants – but the recipe for good food is a little different at 35,000 feet than on the ground.

“It’s all about balance,” he says. “The latest science says you lose about 30 percent of your ability to taste at altitude.”

Researchers at the flight test facility of Germany’s Fraunhofer Institute for Building Physics have tested and validated this phenomenon. They say a person’s sense of taste at altitude is similar to their sense of taste with a cold. Salt loses 20 to 30 percent of its intensity, while sugar tastes 15 to 20 percent less intense.

“On top of that,” says Rappaport, “we’re trying to figure out ‘What’s this going to taste like after it’s been heated up, cooled down and heated back up again.”

And that calls for innovation in four distinct areas:

One of Rappaport’s first class recipes includes blanching (immersing briefly in rapidly boiling water) fresh ravioli, then flash-chilling it and covering it with fresh cabbage leaves until it’s ready to be reheated and served – and that’s just to cook the pasta. Cubes of smoked mozzarella cheese melt over the ravioli as its reheated.

“I don’t think many people realize how much goes into onboard meal planning behind the scenes,” says Luchau.”

Flying this month? Learn what you can expect to find on the menu.